Circulars regulating banking restrictions will be repealed if a capital control law is passed, according to the Banque du Liban governor. 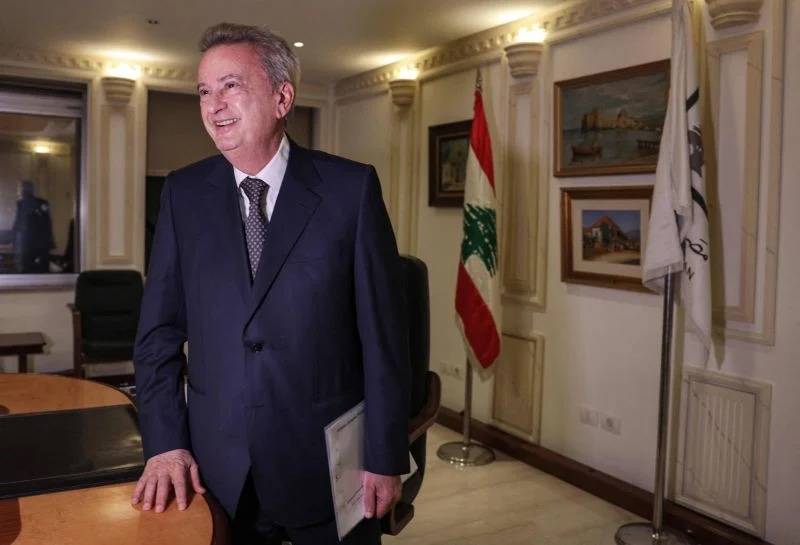 Banque du Liban Governor Riad Salameh in his office at the end of 2021. (Credit: Joseph Eid/AFP)

In office since 1993, the senior official said that Lebanon has begun the process of unifying exchange rates, a measure called for by the International Monetary Fund (IMF), among others. Several different rates currently coexist, since the Lebanese lira began to collapse as part of a financial crisis that began to spiral in 2019.

The longstanding official exchange rate of LL1,507.5 to the dollar has become all but obsolete and will soon be replaced by a rate ten times higher, according to Salameh’s remarks.

Meanwhile, Lebanon relies on the rate set by BDL’s Sayrafa platform, which is updated every night and was LL30,300 pounds on Monday, as well as the parallel market rate set by legal and illegal money exchangers, which has been around LL40,000 pounds for several days. Finally, there are the rates for withdrawing dollars, which are blocked by bank restrictions and informally called “bank dollars,” “Lebanese dollars” or “lollars,” according to mechanisms put in place by the BDL since 2020.

This change in the exchange rate regime was initiated in a piecemeal fashion after the long-delayed state budget for 2022 finally went into effect last week.

Salameh added that as of Feb. 2023, there would be only two exchange rates, the LL15,000 pound rate and the Sayrafa rate, as part of a gradual process of unifying the lira’s value.

However, he did not explain how he would align the market rate with the Sayrafa rate, when the difference between the two is close to LL10,000. The change assumes that the BDL, which has “$10.3 billion in foreign exchange reserves,” according to Salameh, will be able to inject enough dollars into the market to lower the rate, or artificially adjust the Sayrafa rate. The figure does not take into account the gold reserves (more than $15 billion at the end of October) or the $5 billion in Lebanese foreign currency debt securities (Eurobonds) that the BDL holds.

Salameh also told Alhurra that the circulars put in place by the BDL to mitigate the effects of the banking restrictions — No. 151, No. 158, as well as No. 150 which enshrines the full availability of “fresh” dollars and No. 161 which allows the withdrawal of fresh dollars from bank accounts at the Sayrafa rate — will be removed as soon as the country has a capital control law in place.

“This is what the IMF is asking for,” Salameh said, passing on responsibility for the decision to Parliament.

“I think that today the circulars that we have put in place allow depositors to withdraw up to 1,800 fresh dollars per month from their various accounts,” he added. This is the maximum threshold allowed by the combined withdrawal limits of each device, no matter how many accounts the depositor has, according to a banking source contacted by L’Orient-Le Jour.

Salameh is widely seen as one of the main figures responsible for the collapse of the Lebanese financial system, notably for having defended a dollar-intensive fixed exchange rate regime and for not having exerted more pressure on regulating the banking sector at the beginning of the crisis.

Still, he told Alhurra on Monday that his actions had mitigated the consequences of the crisis. According to him, “the most important event” that broke confidence in the Lebanese financial system and its institutions was the default on the Eurobonds decided by the government of Hassan Diab in March 2020. To Salameh, this decision “isolated” Lebanon from the markets before COVID pandemic only worsened the situation.

The fact remains that Lebanon, which had been accumulating balance of payments deficits for years, was rated rather poorly by financial rating agencies long before the crisis broke out in 2019.

Among other points, Salameh also said he could use banks’ reserve requirements as part of his monetary policies. This is an interpretation that the doctrine of the Switzerland-based Bank for International settlements — the central bank of central banks — does not dispute, although there is a debate on this subject.

He also insisted that BDL’s current reserves are sufficient to absorb the LL70 trillion now circulating in the market.

More surprisingly, Salameh assured, citing BDL statistics, that Lebanon’s economy is expected to grow by two percent in 2022, while a majority of the projections made by other institutions in 2022 predict a shrinking economy. Only the Institute of International Finance, an international association of banks, stood out, forecasting a three percent growth driven by tourism.

Furthermore, Salemeh then stated that BDL maintains its reserves “via Sayrafa and other methods.”

He added that the funds allocated to the public utility Electricité du Liban to finance fuel purchases for six months in accordance with a recently mentioned agreement “will not come from the BDL’s reserves” and that the number of banks that will survive the upcoming restructuring of the sector will depend on the ability of their shareholders to recapitalize.

Responding to a question on the supervision of Al Baraka Bank by the High Banking Authority — which he heads — Salameh indicated that the brand “lacked liquidity and capital” and that the decision to appoint a temporary administrator was not intended to put it in bankruptcy.

On Saturday, the Bahraini banking group Al Baraka strongly criticized the decision taken against its Lebanese subsidiary and promised to defend its position in court.

Finally, Salameh did not comment on the various investigations launched against him abroad and related to his assets, cases that have been discussed many times in the media, but which he has always denied have merit.

Following a media hiatus of several months, Banque du Liban Governor Riad Salameh answered questions on Monday from the Alhurra television channel on the future of Lebanon’s exchange rate.In office since 1993, the senior official said that Lebanon has begun the process of unifying exchange rates, a measure called for by the International Monetary Fund (IMF), among others. Several different...