Twelve years of preparation, more than $200 billion in investments, eight stadiums built and, most shockingly, at least 6,500 migrant workers dead. The figures for the Qatar 2022 World Cup are staggering. But as controversial as it is, L’Orient-Le Jour sheds light on this competition, held for the first time in an Arab country.

On the occasion of the World Cup, L’Orient-Le Jour is publishing a series of articles to analyze the perception of this event in the region, its impact on Qatari society and the history of football in the Gulf. This first article of a four-part series describes a World Cup that has been rocking the region, despite the difficulties that prevent people from fully enjoying it. 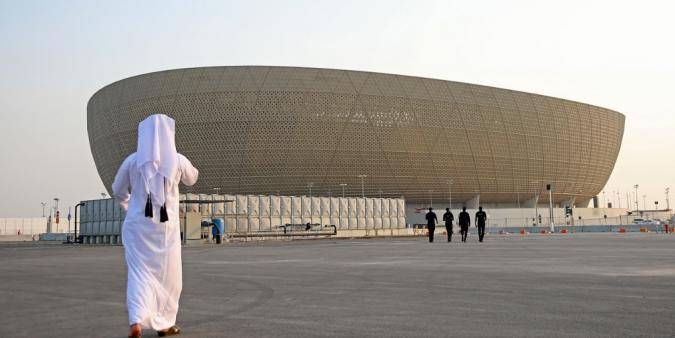 Lusail Stadium in Doha, one of eight stadiums that will host FIFA World Cup matches in November and December 2022. (Credit: Mustafa Abumunes/AFP)

Never before has a World Cup unleashed so much passion. For several months now, calls for a boycott and other controversies have been multiplying: allegations of corruption connected to awarding hosting rights to Qatar, controversies over the ecological and human toll as well as over food and alcohol restrictions.

But in the Middle East, another feeling prevails: the joy of seeing, for the first time in World Cup history, an Arab country organizing the sports event. Despite the many worries of everyday life — repeated power cuts, difficulties in making ends meet — many people want to enjoy it as much as possible, excited by the aura that the region can gain from the competition.

“It is a source of pride for all Arabs,” said Ahmad, a young civil engineer from Jordan who is based in the United Arab Emirates and Kuwait. I am sure that the way Qatar will organize it will be very special.”

Ahmed, an independent Iraqi journalist and researcher added, “Everyone here is happy about it. Other people look at Qatar as a very small state, but it is very powerful. This World Cup will enhance the reputation of the Gulf countries.”

A few days ago, the French satirical weekly Le Canard published a cartoon depicting the players of the Qatari football team as terrorists armed with explosive belts and Kalashnikovs, which provoked the indignation of many social media users.

“[Westerners] want the world to continue to see Arabs as criminals and backward,” said Ahmed, the journalist. “They see that most eyes will focus on the Arab countries for the next few years, as we can already see with Expo 2020 Dubai or the COP27 climate conference in Egypt, and they are afraid of it.”

Rim*, a French-Lebanese woman living in Beirut, was more measured in her response. She said she believes that the discussions raised around Qatar are necessary. But she stressed the double standards connected to current “racist” boycott campaigns, while “everyone turned a blind eye when Russia hosted the World Cup, despite all the terrible things it committed in Syria.”

“I asked myself the question of whether I should boycott. I decided to watch only France’s matches,” she added.

Despite the power outages, Rim says that the atmosphere at home is promising. “Last year during the European championship, I missed a spectacular goal because of the connection,” she recalled with a laugh.

Sakr, a 28-year-old Yemeni man, is familiar with these problems. “There is no government electricity because the generators are located in areas close to the conflict and still cannot operate,” he said.

A resident of southwestern Yemen’s Taizz, where electricity has been managed by local investors since the war began ravaging the country eight years ago, Sakr must pay $40 a month for his electricity, “the equivalent of a monthly salary that a civil servant receives from the government.”

While his neighborhood generator does not provide him with a continuous power supply, this sports fan is now worried about how he will watch the games. For him, football is more than a hobby. “The interest in this sport has grown in the country since the war,” Sakr said.

Football “has now become the only outlet to escape what we are going through and stay away from the bad political and economic reality of Yemen.” In mid-December, the unprecedented victory of Yemen’s team in the West Asia Junior Football Championship resulted in mass celebrations across the country, raising the short-lived hopes of renewed unity.

In Gaza, too, the World Cup looks like an escape. There, “football is always a big deal,” said Rasha, a 37-year-old Gaza resident. A large percentage of Gaza’s population are youth, though the whole enclave will beat to the rhythm of the World Cup. And despite confessing little interest in football, Rasha said she looks forward to the tournament’s sense of community and euphoria.

Until three months ago, Israeli forces targeted the Palestinian enclave with a deadly bombing campaign, officially meant to target the Islamic Jihad organization.

In this strip of land, one of the most densely populated in the world, sporting activities blossomed despite an Israeli blockade since 2007. . “There are more football fields, basketball courts, martial arts centers ... Women are increasingly taking part in that,” said Rasha.

‘Only the rich will watch the competition’

But with six hours of electricity a day in Gaza and a very high subscription price for sports channels, most people will gather in the city to watch the games. “Platforms like beIN Sports are a luxury for us,” said Hurya, another Gazan. “We prefer to go to cafes, which cost you nothing but your drink and your shisha.”

Rami* also plans to watch the games at cafes and restaurants in the Egyptian city of Dahab, located on the eastern coast of the Sinai Peninsula. Much to his disappointment, the Egyptian national team will not be participating in the World Cup this year.

In his country, the importance of football bleeds into politics. In 2012, riots in northeastern Egypt’s Port Said, where violence broke out after a game between the local team and Cairo’s Ahly team, left 74 people dead and more than 500 injured.

Following their victory at home, supporters of the local team stormed the stands and attacked members of the competing team. Some political opponents, led by the Muslim Brotherhood, criticized the attack and claimed it was orchestrated by the supporters of Egypt’s deposed president Hosni Mubarak who allegedly wanted to punish the Ahly club’s fans, who were at the forefront of the 2011 Revolution.

In Idlib, in northwestern Syria, many posters point out to residents which cafes are broadcasting the World Cup, said Abdo*, a 32-year-old employee of a veterinary practice. “Of course, the poorest people who live in IDP camps and struggle to live are not going to watch it,” he said.

In Idlib governorate, millions of residents are internally displaced, many of them living in dilapidated camps. Even for Abdo, who is paid in dollars, watching the World Cup has a cost. “My salary is not enough to cover all my daily expenses,” he said. “I can't afford to go to cafes. It’s very expensive. Only the rich will go to watch the games.” While the Syrian currency continues to fall, the city of Idlib adopted the Turkish lira in June 2020, which is also losing its value.

During the 2010 World Cup, Idlib had a very different atmosphere, said Abdo. “Flags of different national teams were hanging everywhere from the balconies.”

Since then, the popular uprising and bloody repression at the hands of the Assad regime have changed life in Syria. The last enclave in rebel hands, Idlib is controlled mostly by the hardline Islamist group Hay’at Tahrir al-Sham (HTS) — a former branch of al-Qaeda in Syria — which rules the province with an iron fist.

Abdo does not know whether women will be allowed in the cafes to watch the World Cup this year, although no information has been released yet on this subject. Not having a television at home, the young man said he will nevertheless try to watch the games on streaming sites from his mobile phone — albeit at the behest of power cuts and network stability.

*Some first names from here onward have been changed at the request of the interviewees.

Never before has a World Cup unleashed so much passion. For several months now, calls for a boycott and other controversies have been multiplying: allegations of corruption connected to awarding hosting rights to Qatar, controversies over the ecological and human toll as well as over food and alcohol restrictions.But in the Middle East, another feeling prevails: the joy of seeing, for the first...

Why Tehran is attacking Iranian Kurds amid countrywide protests