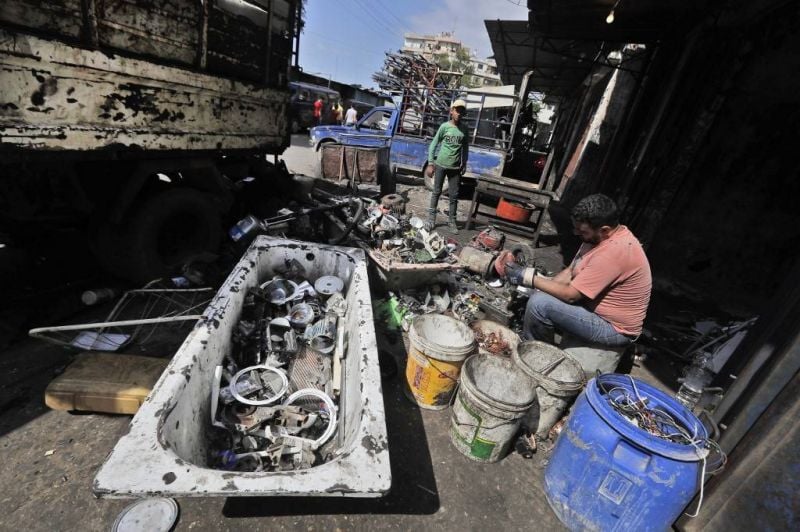 A man dismantles and sorts electrical appliances in a workshop in the Bab al-Tabbaneh district of Tripoli, in June 2020. (Credit: Joseph Eid/AFP)

According to UNDP statistics released in September, the country has experienced the sharpest decline in the UN Human Development Index (HDI) in the world between 2019 and 2021, reaching its lowest level since 2005.

This significant decline represents an alarming restriction on the Lebanese's ability to improve their situation and recover from the crisis on several levels — something that threatens to trap Lebanon in cycles of insecurity and vulnerability.

The HDI highlights three essential capabilities in people's lives: health and mortality, education, and earning an income that allows for a decent standard of living.

The crisis in Lebanon has led to a simultaneous decline in all these dimensions, accelerated by the long-standing neglect by successive governments.

While before the crisis, shortcomings were partially offset by the significant private sector and individual involvement in the provision of social services, the capacity of the private sector to act has now been undermined, further underlining the persistent failures of the government.

Lebanon's drop in life expectancy is among the worst in the world, with a 5 percent decline in average life expectancy between 2019 and 2021 (compared to -1.4 percent globally), returning Lebanon to its 2009 level.

This deterioration is not only due to the health consequences of the pandemic, but more importantly reflects the population's limited access to quality health care, against a backdrop of electricity and fuel shortages in hospitals and shortages of drugs, medical supplies, and personnel.

Limited access to healthcare and disadvantages in the health system were not caused by the recent economic crisis, which only accelerated the sector's deterioration.

Since the end of the civil war, the role of the Health Ministry has focused almost exclusively on service delivery.

In 2019, households had to pay one-third of health expenditures out of their own pocket.

In the context of massive currency depreciation and inflation, Lebanon experienced the world's largest drop in gross national income (GNI) per capita in 2021 — which went below its 1991 value after the civil war.

This drastic drop in per capita income, and thus in people's ability to secure a decent living, reflects the bleak state of the labor market in Lebanon.

According to the survey conducted in January 2022, the unemployment rate almost tripled between 2019 and 2022.

Even as commodity prices have often more than quadrupled for all consumers, wages have not been adjusted, while the government has not taken effective measures to adjust the minimum wage and public sector wages.

Yet Lebanon's labor market had been deficient for decades; a combination of factors, including labor market mismatches, low levels of job creation, and a high prevalence of low-quality, low-productivity jobs, meant that Lebanon maintained a high unemployment rate.

Social protection has also been inadequate, with the National Social Security Fund (NSSF), the largest provider of employment-based social services in Lebanon, covering only 30 percent of the labor force.

An employment fund to protect those who lose or fail to find jobs has not yet been established.

Meanwhile, the resilience of the education system has long been compromised by the limited allocation, efficiency, and management of public resources.

Hovering between 1.7 percent and 2.8 percent of GDP since 1992, Lebanon's spending on education has not reached the recommended minimum (4 to 6 percent), even as Lebanese public schools have been trying to absorb more than 100,000 Syrian refugees since 2011.

For decades, households have carried a far greater financial burden for education than the government.

Since the onset of the crisis, households have struggled to secure school fees, and dropout rates have increased at an alarming rate. UNICEF reported that one-third of young people have dropped out of school, while the ILO reported that only 40.4 percent of people aged 5-24 attended school in 2020-2021.

It was also estimated that 55,000 students switched from private to public schools in 2020-2021 alone, putting more pressure on a resource-starved school system.

The long-standing neglect of human development has compounded the impact of the current crisis.

The ongoing deterioration of human development means that opportunities in this regard are met with an increasingly unstable future in the country, though they remain essential for the Lebanese to overcome the crisis.

While much remains to be done, it will not be sufficient to focus exclusively on Lebanon's economic recovery and growth. To fully exploit the gains of this growth, it must be actively directed toward human development.

To achieve this, the Lebanese government will need to address the legislative, institutional, and structural gaps that have historically limited human development.

This will include balancing economic and social spending in the government budget by explicitly allocating spending to education, health, and the labor market, and instituting more effective planning and management of these sectors.

For growth to translate into a fair distribution of opportunities and freedoms, government priorities will need to be restructured.

The Lebanese government must remember that Lebanon's true wealth lies in its people and that human development must be placed at the forefront of all recovery plans.

By Ghida Ismail, researcher at the United Nations Development Program.

Lebanon's multidimensional crisis has reversed the country's progress in human development.According to UNDP statistics released in September, the country has experienced the sharpest decline in the UN Human Development Index (HDI) in the world between 2019 and 2021, reaching its lowest level since 2005.This significant decline represents an alarming restriction on the Lebanese's ability to...