Lebanese banks to return to work Monday but with adapted procedures

BLOM Bank CEO Saad Azhari blames the authorities for delaying the adoption of a capital control law for too long. 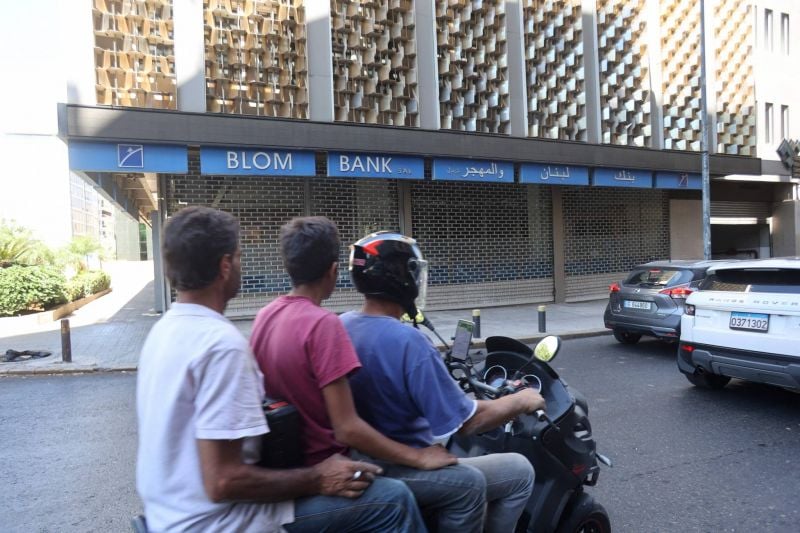 Ten days after the unprecedented wave of bank holdups undertaken by depositors challenging the banking restrictions in force in a crisis-stricken Lebanon, the Association of Banks in Lebanon announced Sunday that its members would resume work starting Monday, but would adapt their procedures to the security context. Most bank branches across the country have been closed since last Monday.

In a statement issued Sunday morning, ABL announced that banks would provide basic banking services to individuals and businesses through the ATM networks, and that customers with urgent requests could "contact the headquarters or customer service."

Dealing without the bank branches

"The ABL felt that this decision was a compromise between the need to serve customers — during a week in which the salaries of a majority of civil servants will be paid — and the need to ensure the safety of their employees,"  ABL said in a statement.

The statement suggests that each bank will be free to choose the procedures they deem adequate to welcome their customers. This means that branches will either remain closed or will open to receive customers by appointment. It also means that ABL believes that it has not yet received sufficient guarantees from the authorities that security will be provided around bank branches.

A banking source confirmed to L'Orient-Le Jour on Sunday afternoon that at least one of the country's banks has armed its security staff, while another has hired a private armed protection company.

The lawyers' collective Mouttahidoun criticized on Sunday the decision of ABL, saying that depositors' response to the "abuses of the banks" will be "through actions."

According to several banking sources, the decision to keep the branches closed had been taken since Friday, as had the decision to organize the work to do without the agencies, as much as possible. "Some banks will assign some of their staff to some of their branches to perform certain operations, or even receive customers by appointment. The rest of the operations will be distributed between the banks' headquarters and the ATMs", explained one of them, reminding that the Banque du Liban remains open.

The ATM networks will therefore in principle still be provisioned, international transfers will continue to be executed in both directions (Banque du Liban still being open), the processing of salaries will be ensured, as well as the withdrawal operations at the Sayrafa platform rate. The volume of the latter operations recorded by the BDL last week showed normal levels, even if it is difficult to draw conclusions from these figures that do not show the breakdown between transactions made through banks and those made through stockbrokers.

Blame the authorities
Among the few bank executives to have spoken publicly since the beginning of this new phase of the crisis, the CEO of BLOM Bank and member of the board of directors of the ABL, Saad Azhari, blamed the ruling class for "failing in its duty and preferring to satisfy its populist instincts rather than adopt the urgent measures necessary to protect the interests of all citizens." Contacted by L'Orient-Le Jour, Saad Azhari said he insisted "from the first day of the crisis," and in agreement with the ABL, that a law on capital control be adopted that would have regulated the banking restrictions informally implemented by banks since the fall of 2019 and which mainly affect depositors' access to their foreign currency accounts.

The adoption of capital control measures is advocated by the International Monetary Fund, with which Lebanon reached a preliminary agreement in April to potentially unlock a financial assistance program. A draft law was sent by the government to Parliament, but the joint parliamentary committees temporarily suspended consideration of it in late August. According to several experts, the text should be amended in any event to be fairer to depositors.

Azhari also expressed his "unconditional support for the adoption of a law that aims to repatriate all sums transferred abroad since October 2019 in order to ensure equal treatment among all depositors." Defending himself against allegations that he is seeking to "justify" the actions of the sector, he nevertheless stressed that banks have been "abandoned to their fate in the face of the crisis," with reaction capabilities diminished by the decline in their liquidity in foreign currencies caused, according to him, by the "circulars of BDL [the central bank] that have led to a high concentration of banks' deposits in dollars with the latter." Deposits that its currency reserves are currently far from being able to cover.

The bank manager also acknowledged the fact that "some" banks had indeed been responsible for "discriminatory practices" by authorizing some clients to transfer their money abroad or to withdraw foreign currency from their accounts, while the common depositors were subject to restrictions. Saad Azhari assured, however, that his company had "never agreed" to play this game, even in favor of "its shareholders and influential political figures." He said he was surprised by the reaction of Sali Hafez, one depositor who tried to recover funds by force from a Blom Bank branch in the Sodeco neighborhood in Beirut, assuring that neither she nor her sister had presented documents attesting to the medical emergency that motivated their desire to withdraw their deposit to pay for treatment.

No fewer than seven bank branches were attacked by depositors ten days ago. The banks condemned these actions, while some sectors of the public and depositors' associations supported them. Speculation that the robberies were part of a coordinated effort has also surfaced in the public debate, but without any tangible evidence to support it.

The banking restrictions in Lebanon can be compared in substance to those imposed on Cyprus or Greece during the recent financial crises that hit those countries. The problem is that they are not endorsed by any law; however Banque du Liban has indirectly validated them through circulars, and the authorities have allowed de facto capital controls to be imposed for three years.

Ten days after the unprecedented wave of bank holdups undertaken by depositors challenging the banking restrictions in force in a crisis-stricken Lebanon, the Association of Banks in Lebanon announced Sunday that its members would resume work starting Monday, but would adapt their procedures to the security context. Most bank branches across the country have been closed since last Monday.In a...