While the groups all agree on defending bank depositors’ rights, they are not necessarily aligned on everything else. After a week of bank holdups by angry depositors, here is a closer look at Lebanon’s most prominent depositor groups. 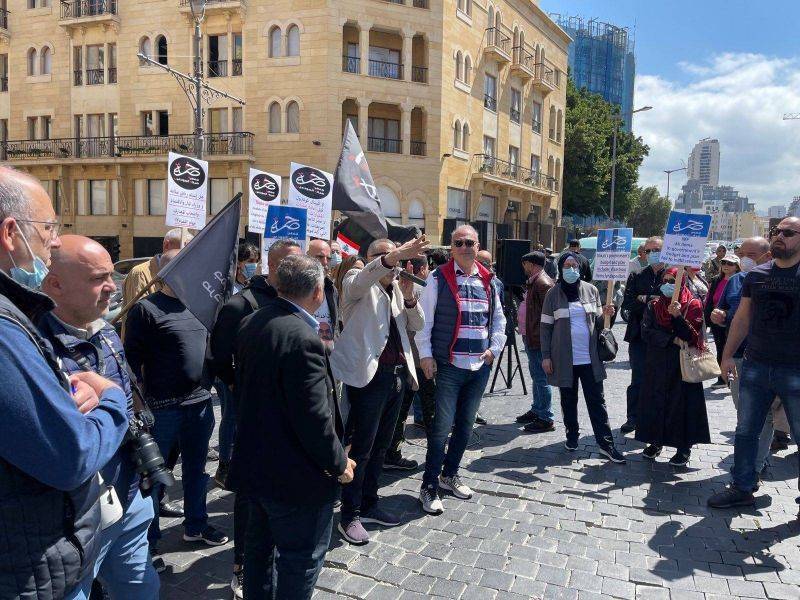 A demonstration organized by the Cry of the Depositors group in Beirut, on April 13, 2022, against a bill on capital control. (Kabalan Farah/L'Orient Today)

Increasing numbers of Lebanese are taking extreme measures to recover their money from the banks — with the support of several so-called “depositors’ associations.” Who are the people behind these groups and what do they want?

It seems that the general public has some difficulty in distinguishing between these associations, which have nearly identical names. Yet their methods and positions on economic policy vary significantly.

The Cry of the Depositors group recently entered the spotlight by claiming responsibility, along with Mouttahidoun, another association, for organizing the bank holdup carried out by Sali Hafez on Sept. 14 at a Blom Bank in Beirut’s Sodeco neighborhood.

Founded in the wake of the economic crisis, which began in 2019, the Cry of the Depositors has 500 members, according to its secretary general Richard Pharaon.

The association is best known for its grassroots mobilization, though it also provides legal and financial advice. It claims to be apolitical.

“We are neither with the thawra [the Oct. 17 2019 popular protest movement] nor with the traditional parties, but we are open to discussion with everyone to advance our cause,” Pharaon told L’Orient-Le Jour.

The association is not banking on the International Monetary Fund's planned intervention to rescue the collapsing Lebanese economy. Lebanon and the IMF reached a staff-level agreement in April for a multi-billion-dollar financial assistance package — to be provided on the condition that the government issue some much-needed economic reforms.

“It is a loan of only $3 billion, a drop in the bucket compared to the financial hole of more than $70 billion,” the rough figure of the Lebanese financial sector’s total losses, Pharaon said.

The group is also opposed to the deposit restitution methods outlined in a roadmap by Deputy Prime Minister Saade Chaami, which, in the face of colossal financial losses, prioritizes small depositors. Chami is the architect behind the recovery plan, passed by Lebanon’s cabinet just before it went into caretaker mode following parliamentary elections in May. The plan includes several measures required to unlock the IMF funding.

“There are no small or large depositors. There are those who stole and must return the money, and the others,” Pharaon said.

The association posits that all deposits could be bailed out in time by “repatriating the excessive profits made by the banks” and “liquidating their assets abroad,” according to Pharaon. It also proposes the creation of a fund to manage public assets “that could grow if their management is entrusted to a third party.”

Often confused with other depositors’ associations, Mouttahidoun is rather a collective of lawyers, founded in 2016 in reaction to the waste crisis. It acts as the legal branch of the Cry of the Depositors.

The association’s founder, Rami Ollaik, is a lawyer known for his unusual career path, documented in the 2008 autobiography The Road of the Bees.

Ollaik is a former student representative of Hezbollah, though has since then denounced the group, and a former professor at the American University of Beirut (AUB). He often speaks on behalf of the depositors, making headlines for his stances and controversial methods.

In May 2021, he was arrested for defamation after posting a video in which he vehemently attacked the judiciary and the public prosecutor.

“This was one of dozens of unjust complaints against me and Mouttahidoun to silence us,” Ollaik told L’Orient-Le Jour.

In November of the same year, he was removed from the Beirut Bar Association, a decision that he appealed. Ollaik, however, continues to practice as a lawyer pending the issuance of a judgment in the case.

Contacted by L’Orient-Le Jour, MP Melhem Khalaf (Beirut II/Forces of Change), who was then head of the Beirut Bar Association, said he could not disclose the reasons for the decision of the Disciplinary Board, as it was “subject to the confidentiality imposed by the ethics of the profession.”

Outside of Ollaik, Mouttahidoun itself is known for unconventional actions. The group apparently orchestrated the holdup carried by Sali Hafez, a depositor at Blom Bank. It was also behind a suit filed against Fransabank, which led to the seizure of Fransabank’s assets in March. The group also filed a suit against the Société Générale de Banque au Liban (SGBL) and money transfer company Mecattaf.

Instead of the IMF intervention, Mouttahidoun calls for a local solution.

“There are enough [funds] in the banking system, given the exuberant profits made over the years, to cover more than all the deposits,” Ollaik said. “The problem lies the lack of political will.”

Our Money is Ours was born out of a 2021 split with the Cry of the Depositors.

According to its founder, Firas Tannous, the association counts 7,000 depositors among its members and has about 20 experts to advise them.

The group is sometimes accused of being aligned with the Free Patriotic Movement, given some social media pictures with Wadih Akl, a lawyer close to the FPM. The association, however, denies any political affiliation.

Our Money is Ours claims to be “in contact with all parties, from Hezbollah to the Lebanese Forces,” as part of its lobbying activities.

Though it wasn’t directly involved in Hafez’ Blom Bank holdup, the group expressed support for it.

“What alternative do we have today?” Tannous told L’Orient-Le Jour, in reference to the recent spate of bank holdups.

The group shares the same position as the Cry of the Depositors concerning the intervention of the IMF.

“There are many local solutions that do not require more debt, such as investing in tourism, agriculture, services or, potentially, gas and oil,” Tannous said.

The association, however, has a more institutional approach.

“We have managed to release funds through amicable agreements with banks. While this way of operating is less publicized, it has been successful in about 20 cases,” he added.

The Association of Depositors was founded by Hassan Moughnieh in March 2020 and offers free legal and financial advice.

The media hype around the group is mainly due to the charismatic personality of its founder, who himself held Blom Bank’s employees hostage in March 2020 to retrieve some of his blocked funds so that he could pay for his sick mother’s treatment.

The group did not participate in Hafez’ holdup, but it had managed negotiations with the Federal Bank in August on behalf of Bassam al-Sheikh Hussein, another depositor who carried out a similar heist to retrieve his money.

“Why should depositors be subject to a haircut when it is the system in power that is at the origin of the crisis?” Moughnieh asked.

Finally, the Depositors Union stands out with a very different vision from the other associations.

Co-founded in November 2019 by activist Nizar Ghanem, the group cooperates with civil society groups such as Li Haqqi, al-Marsad al-Shaabi, and Beirut Madinati.

The group says it has filed more than 100 lawsuits on behalf of depositors in Lebanon and abroad. It also provides legal and financial expertise to opposition MPs and civil society.

It is the only association that is clearly in favor of an IMF intervention.

“The losses are so huge that it is not possible to bail out all the deposits, hence the need to protect the small and medium-sized depositors and find fair ways to protect the others,” Fouad Debs, a lawyer and a member of the association, told L’Orient-Le Jour.

While it was not involved in Hafez’ holdup, the group is currently providing her with legal assistance.

Increasing numbers of Lebanese are taking extreme measures to recover their money from the banks — with the support of several so-called “depositors’ associations.” Who are the people behind these groups and what do they want?It seems that the general public has some difficulty in distinguishing between these associations, which have nearly identical names. Yet their methods and...