Delays by Lebanese authorities in initiating financial recovery reforms are undermining the projections on which the plan was based. 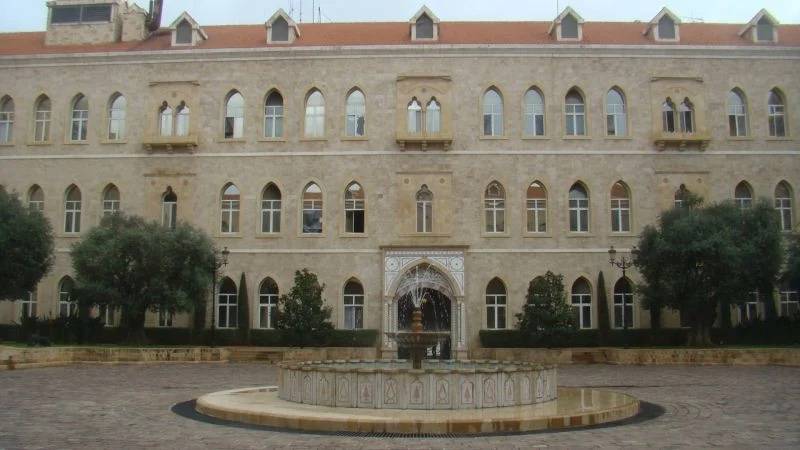 A view of the Grand Serail in Beirut. (L'Orient-Le Jour file photo/M.A.)

Last week, Parliament began discussions on the draft budget for 2022 — however, the two-day session was less about organizing public finances for a year that is almost over than it was about satisfying a request from the International Monetary Fund, which begins a two-day visit to Beirut Monday.

On April 7, Lebanon and the IMF announced that they reached a staff-level agreement through which the financial institution said it would release a multi-billion-dollar loan if the Lebanese authorities began a comprehensive project to reform the country’s economic and financial system, damaged by the crisis that broke out in 2019.

Issuance of the financial aid package depends on the executive’s recovery plan.

L’Orient-Le Jour was able to view the most recent version of this document dated Sept. 9, which has since been sent to the caretaker prime minister.

The plan was approved by the government of then-Prime Minister Najib Mikati in May, just before he announced his resignation in the wake of the May 15 legislative election. Mikati nevertheless still serves as caretaker prime minister in the absence of a new cabinet.

The September version is more or less the same plan as the original, intermediate versions of which had been circulating since the spring. The general approach is also quite similar to the strategy developed two years earlier by the Lazard consultancy, which was commissioned by the government of Hassan Diab.

The strategy was categorically rejected by the Association of Banks in Lebanon (ABL), which led to the failure of the first round of discussions with the IMF, launched in 2020.

While the government has not really changed its approach, some of the banks are now saying behind the scenes that they are more open to some of the terms.

The government lists six main objectives in its recovery plan:

• Strengthening Lebanon’s fiscal position in the medium term, while rehabilitating infrastructure and protecting the most vulnerable social classes.

• Dealing with financial sector losses in a fair manner.

• Putting forth a bank resolution so that the banking sector resumes its role in financing the private sector.

• Rebuilding the social fabric damaged by the worsening economic situation.

• Strengthening governance and transparency in state bodies and institutions.

At the macroeconomic level, the plan assumes a return to growth this year (+2.6percent) and the maintenance of a positive growth rate at least until 2026.

This hoped-for pickup in economic activity led the government to aim for Lebanon’s public debt-to-GDP ratio to reach 100 percent by 2026 and around 75 percent by 2032, with several estimates putting the ratio at over 200 percent by 2021.

Notably, these forecasts are already partly outdated and will have to be completely revised if leaders further delay implementing the IMF-recommended measures.

In terms of construction, the plan calls for increased investment in infrastructure, which in principle will be financed mainly by the country’s supporters and expatriate Lebanese, reassured by the planned reforms.

Electricity reform, which aims to provide the public utility with 24 hours of power per day throughout the country by “early 2026,” is, reasonably, at the forefront of the government’s priorities.

However, the updated plan does not take into consideration the reforms approved in the previous plan, which have yet to be implemented.

Among other proposed measures, the document refers to a reform of the civil service pension system, moving Lebanon from a system where employees receive a one-time end-of-service payment to a system where retired employees would receive a certain amount of money each month.

The September version of the plan includes almost the same figures as those announced in the version leaked in April. The total losses incurred by the banking sector are still estimated at around $72 billion, “the majority of which [is concentrated] at the BDL level,” the plan states.

This amount is closer to $73 billion, according to the most recent estimates circulated by senior officials and bankers in the public sphere.

According to the plan, these losses were caused by three factors: “Debt restructuring [which likely means defaulting on nearly $32 billion in Eurobonds], exchange rate depreciation and increased non-performing loans.”

They also state that finding a solution to this problem requires a “special balance” to protect depositors while ensuring some continuity in the banking sector.

As a solution, the plan initially calls for the state to contribute “to the possible extent” to cleaning up the situation in BDL, which would be done in part by issuing Treasury bills for an amount of up to $2.5 billion and which could be increased depending on the state’s capacity to incur debt.

Second, the plan specifies that bank shareholders will be required to contribute to covering losses with depositors being involved as a last resort, while protecting deposits of at most $100,000 as of March 31, 2022.

The plan notes that this cap could be modified as circumstances change. For amounts in excess of this guaranteed threshold, the plan calls for a combination of bail-ins (converting amounts of money into equity in the bank), haircuts (when a depositor receives less than the face value of their asset) and “lirafication” for rates at or below the shadow market rate.

The modalities for the reimbursement of deposits will depend on the law establishing formal capital control, which is expected to be passed but has not yet been adopted.

Drafted under the leadership of Deputy Prime Minister Saad Chami, the recovery plan is a strategic document that must be adopted by the government, without the need to be voted on in Parliament, in principle. In short, the big-picture plan itself does not require a vote, while the individual measures the plan stipulates must be voted on.

Still, the recovery process must follow objectives defined in agreement with the IMF. The objective is to ensure that Lebanon will be able to repay its debts, starting with the hoped-for $3 billion IMF loan.

An Extended Fund Facility, the type of program that Lebanon had applied for from the IMF, is intended for countries that have “serious medium-term balance of payments problems,” according to the financial institution’s website.

The general conditions for an EFF stipulate that financial assistance be disbursed over a period of three to four years and must then be repaid within 4.5 to 10 years.

Thus, in order to convince the IMF to loan it the money, Lebanese leaders must submit a plan with items proving they have adopted the prerequisites listed in the April staff-level agreement. Those requirements include passing four laws to institute formal capital controls, arrange for banking secrecy, organize the bank resolution and adopt the 2022 budget. Finally, the government must launch four processes led by the executive, including restructuring of the public debt, starting an audit of the country’s 14 largest banks, finalizing an audit of BDL’s foreign currency assets and adopting a unified exchange rate.

The plan must also include other macroeconomic and institutional reforms to be implemented over the long term, in parallel with the release of aid.

Lebanon’s financial recovery plan will be useless, however, if none of the measures it calls for are actually implemented or if they are rendered ineffective — as was recently the case with the banking secrecy law.

This article was originally published in French at L'Orient-Le Jour. Translation by Sahar Ghoussoub.

Last week, Parliament began discussions on the draft budget for 2022 — however, the two-day session was less about organizing public finances for a year that is almost over than it was about satisfying a request from the International Monetary Fund, which begins a two-day visit to Beirut Monday.On April 7, Lebanon and the IMF announced that they reached a staff-level agreement through which...