Two days before the string of bank holdups last Friday, Sali Hafez pulled a premeditated 'stunt.' This is a look behind-the-scenes of the operation involving angry depositors, determined lawyers and knowledgeable journalists. 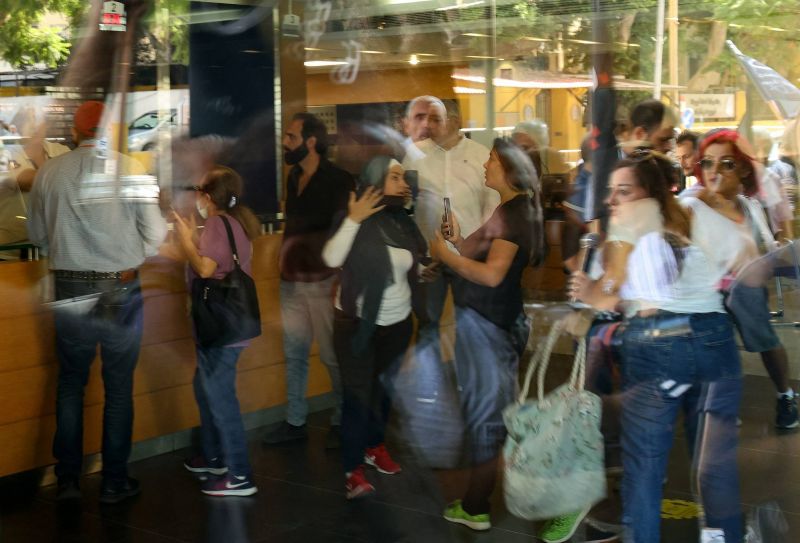 Sali Hafez (green shoes), speaks to a woman inside a bank in Beirut after she demanded access to her sister's deposits to pay her other sister's hospital bills. September 14, 2022. (Anwar Amro/AFP)

“I am Sali Hafez,” said the 28-year-old woman, filmed in a live video on social media, as she stormed Blom Bank in Sodeco, accompanied by a dozen people. “I came today to get the money back for my sister who is dying in the hospital.”

Among her accomplices was Rami Ollaik, the founder of the lawyers' collective Mutahidun (“United for Lebanon”), giving his famous bright red cap.

While this was not Ollaik's first “heist,” several associations claimed their involvement in this priori criminal act with the aim of inspiring other depositors to do the same.

Instructions for an 'ethical bank holdup'

For Ollaik, the story began when he met Hafez at a demonstration to support Bassem Sheikh Hussein, a depositor who held up his own bank in August to recover a portion of his blocked funds to finance his ailing father's medical treatment.

The heist reportedly inspired Hafez, who was facing a similar ordeal. Her sister, Nancy, has a serious cancer that requires expensive treatment which her other sister, Ikram, has enough savings to pay for — in theory. Blom Bank refused to release the young woman's $20,000 in savings due to drastic banking restrictions arbitrarily set since late 2019.

“Sali told me about her plan, which I refused to call a 'heist' because it is the family's money,” Ollaik told L'Orient-Le Jour. “I told her to give it more thought. When we met again the next day, she was more determined than ever.”

Hafez knew who she was dealing with. Ollaik is known for his controversial and highly publicized methods, which have earned him some setbacks with the courts and the Bar Association.

Ollaik also knew Hafez' reputation. She was at the forefront of the demonstrations since the outbreak of Oct. 17, 2019, popular uprising. He knew that she was everything but faint-hearted.

The first meeting took place two weeks before the holdup. Second, the evening before.

“We planned a modus operandi that would allow the application of Article 184 of the Penal Code [which enshrines] self-defense [in the face of] an unjust and unprovoked aggression,” Ollaik explained.

In short, what he and his companions were trying to develop was a kind of ethical “robbery” guide.

“The use of intimidation should be limited to the objective: to recover the entire deposit, with no use of live ammunition, which removes the premise of a criminal intent,” Ollaik added.

This mode of action was eccentrically unconventional, but the group was convinced there was no other way.

“The banks have been holding us hostage for three years,” a member of the Cry of the Depositors, who took part in the holdup, said to L’Orient-Le Jour.

To ensure media coverage, Hafez chose two journalists to cover the event. They were also present at the Sept. 13 meeting, according to Ollaik, who said he did not wish “to go into the details of the media coverage issue.”

Video footage shows a hyped Hafez, who, as soon as she entered through the door, drew a gun — which she later explained was her nephew's toy — and walked around the bank before climbing on a desk.

Amid the ensuing chaos, other accomplices locked the entrance door with a chain. Ollaik, accompanied by Ikram, asked to see the bank manager to give him the money. The manager complied without hesitation.

Then things started to get out of hand. As tempers flared, some of the accomplices began pouring gasoline inside the bank, spraying some customers in the process.

“The fake gun was just there to scare people. But we didn't want things to go that far,” said Ollaik.

The bills were recounted several times. The sum amounted to $13,000 and a few thousand Lebanese pounds.

It was not the full value of Hafez's family's amount, but time was running out. This was when a frantic customer tried to get out of the bank by smashing a glass door with a fire extinguisher, which prompted the group to leave with the money they had.

“The window broke, and we went out through the back of the bank. I never saw Sali again,” a member of the Cry of the Depositors told L’Orient-Le Jour.

Abdel Rahman Zakaria and Mohammad Rustom, two of Hafez's relatives, were the only ones arrested after altercations with the police. In all, the holdup lasted nearly 40 minutes.

What followed was slightly more confusing.

According to Ollaik, Hafez was supposed to meet him that same evening, after the money was secured. But she never showed up.

“The initial plan was to show ourselves to the public, since we had nothing to be blamed for,” Ollaik recounted.

He added that he was not aware of Hafez' next moves — not the interview she gave to al-Jadeed television nor the message posted on her Facebook claiming she was at the airport getting ready to leave the country.

“She is still in Lebanon. She does not want to leave until the two detainees are released,” Fouad Debs, a lawyer with the Depositors Union, told L’Orient-Le Jour.

Hafez remains unreachable, and the reasons behind her change of heart are still unknown. A few hours later on the same day, a second holdup was launched at the BankMed in Aley.

The story of Hafez and her sister quickly made the rounds on social media. The young woman was hailed as a hero. The media hype, however, did not spare her from legal consequences.

According to Debs, Blom Bank filed a complaint against the participants of the holdup. L’Orient-Le Jour was able to verify this information.

Debs is also critical of the modus operandi put forth and defended by Ollaik. He said he finds the legal strategy perilous.

“The conditions of self-defense do not apply,” said Debs. "Our strategy is based on Articles 429 and 430 of the Penal Code, which consider the fact of taking justice into one's own hands as a misdemeanor, and not a crime, which would reduce the sentence.”

Once the police finish collecting testimonies, it will be up to investigating judge Charbel Abou Samra to study the case and decide on possible charges.

Despite the legal risks, the “snowball effect” that holdup organizers were hoping to ignite indeed occurred. On Friday, five similar holdups took place in banks across the country.

“We expected it. We did not coordinate Friday's actions, but we now have about 30 people on the waiting list to do more,” Ollaik said with a threatening tone. “They will be selected according to their seriousness and willingness to avoid any escalation.”

For the Depositors Union, the lesson learned is a little different.

One must take advantage of the “momentum … [to] pressure for the adoption of real reforms,” Debs said, stressing that, while he understands the current distress, he doesn't believe holdups are the solution.

“Confrontation is necessary,” Ollaik maintained. “The depositors' revolution is the best of revolutions. Money has no confession.”

“I am Sali Hafez,” said the 28-year-old woman, filmed in a live video on social media, as she stormed Blom Bank in Sodeco, accompanied by a dozen people. “I came today to get the money back for my sister who is dying in the hospital.” Among her accomplices was Rami Ollaik, the founder of the lawyers' collective Mutahidun (“United for Lebanon”), giving his famous bright red cap.While...