While those in power continue to obstruct judicial appointments critical to the investigation of the 2020 Beirut port explosion, the Higher Judicial Council could resort to another solution: allow interim judges to convene an assembly in the Court of Cassation. 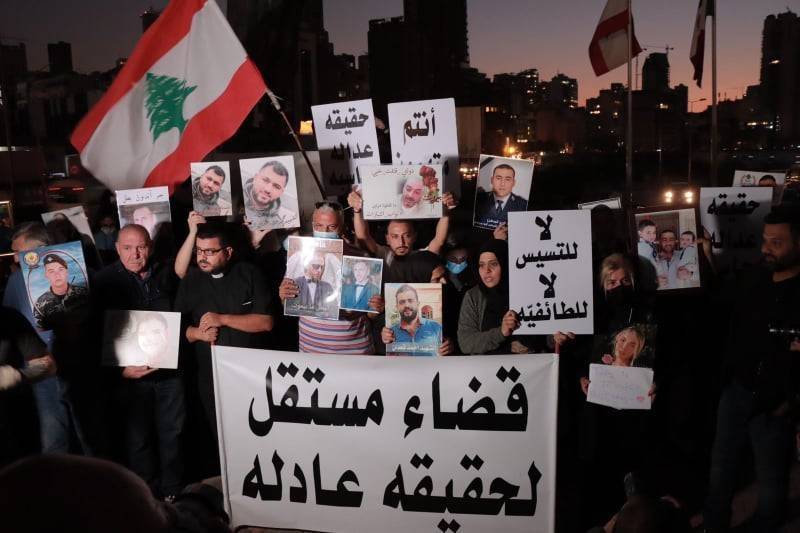 Families of the Beirut port blast victims hold pictures of their loved ones during a protest in front of the destroyed port on Nov. 4, 2021. (Credit: Mohammad Yassine/L’Orient Today)

The Higher Judicial Council (HJC) has failed to agree on the appointment of a judge to replace Tarek Bitar — the lead investigator of the 2020 Beirut port blast probe — who would be empowered to rule on urgent matters.

In a meeting earlier this week, HJC members held nearly four hours of heated debate over the possibility of appointing Samaranda Nassar, first investigating judge in North Lebanon who is reputedly affiliated with the Free Patriotic Movement founded by President Michel Aoun.

HJC Chairman Judge Souheil Abboud was forced to adjourn the session and postpone until Tuesday, Sept. 27.

The HJC made their unanimous decision to appoint an alternate judge based on the proposal of caretaker Justice Minister Henri Khoury, who is himself close to the Aounist camp. This alternative judge is meant to rule on “urgent matters,” believed to mean the detainees in Bitar’s investigation.

The decision to appoint an alternate judge was met with outrage from the families of the explosion’s victims as well as the judicial circles.

A judicial source told L’Orient-Le Jour that the HJC based its decision to appoint an alternate based on the need for “a judge who is at equal distance from all parties, particularly those involved in the investigation.”

Judge Nassar, because of her alleged partisan sympathies, may be unable to maintain neutrality in the case, the source added in reference to the release of Badri Daher, the port’s customs director who is close to the FPM camp and has been detained since August 2020.

According to L’Orient-Le Jour information, seven council members participated in the meeting. In addition to Abboud, there were judges Afif Hakim, Dany Chebli, Mireille Haddad, Elias Richa, Habib Mezher and Ghassan Oueidat, the public prosecutor at the Court of Cassation.

Oueidat, however, did not participate in Tuesday’s vote because he had recused himself back in December 2020 due to his kinship with the MP Ghazi Zeaiter (Amal/Baalbek-Hermel) who was indicted by Bitar.

The appointment of an alternative judge has been interpreted in judicial circles as an attempt to oust Bitar. The investigation was due to lawsuits filed against Bitar by officials implicated in the case, accusing him of “serious faults.”

Instead of appointing a substitute judge, why not simply remove the obstacles in the way of Bitar’s investigation?

The answer lies, once again, in political maneuvering against Bitar. As long as the lawsuits against him remain pending, he is prevented from continuing his investigation.

The plenary assembly of the Court of Cassation — the competent authority to rule on the appeals against Bitar — cannot be convened due to a current lack of quorum. Six of the assembly’s ten seats are empty following the retirement of several members.

The HJC has been trying to replace the retirees, but the draft appointments require the signature of Finance Minister Youssef Khalil, who is close to the Amal bloc.

Khalil justified this freeze by claiming the assembly’s proposed formation is not in line with sectarian parity because it consists of five Muslim and five Christian members, as well as the Court’s president, Souheil Abboud, who is Christian.

Nevertheless, this same formula has been practiced since the 1989 Taif Agreement, and Khalil himself previously signed a draft decree with the same composition.

Now Khalil, backed by Parliament Speaker Nabih Berri, wants to impose a sixth judge of Muslim faith of the Cassation chamber. He then referred the draft to the HJC for review.

But the HJC dug in its heels. The impasse looks set to persist.

A source close to the HJC told L’Orient-Le Jour that, about two weeks ago, the Council presented its draft without modifications to the justice minister, who is supposed to sign and approve the document before passing it on to the finance minister for approval.

In a press statement last week, Justice Minister Henri Khoury denied that he’d received the draft and said he was still waiting to receive it.

Will he sign it, knowing that he had already done so when he first received it before the document was rejected by Khalil?

In any case, the HJC appears to be heading for escalation.

According to an informed source, the HJC is calling for swift approval and signing of the appointment decree by both ministers so it can be passed on to the prime minister and president.

Failing that, the Council is considering another solution: allowing the plenary assembly of the Court of Cassation to convene with the interim judges by empowering those interim judges with the same prerogatives.

The assembly will then be able to rule on judicial appeals and render judgments, which would set the Beirut port blast investigation back in motion.

Relatives of the port blast victims, represented by lawyers Chucri Haddad and Tammam Sahili, recently sent a letter to the Council claiming that the decision to appoint an alternative judge to Bitar is illegal.

The Code of Criminal Procedure provides for the appointment of a single investigating judge at the Court of Justice.

In the same letter, the lawyers added that the Council cannot hold meetings in relation to the Beirut port explosion in the presence of judges Oueidat and Mezher because the former recused himself while the latter is facing an appeal lodged by the relatives of the victims, alleging “serious faults.”

Though he was not entitled to do so, Mezher notified Judge Bitar of a dismissal filed against him by former minister Youssef Fenianos, who is also implicated in the investigation. The victims’ relatives accuse Mezher of “obstructing the course of justice.”

In a statement to L’Orient-Le Jour, Chucri Haddad said “the Council assembly’s quorum of meeting [six] is still not ensured, since the number of magistrates who can participate in the sessions is reduced to five.”

“Any meeting or decision related to the port investigation is therefore null and void,” he added.

The Higher Judicial Council (HJC) has failed to agree on the appointment of a judge to replace Tarek Bitar — the lead investigator of the 2020 Beirut port blast probe — who would be empowered to rule on urgent matters.In a meeting earlier this week, HJC members held nearly four hours of heated debate over the possibility of appointing Samaranda Nassar, first investigating judge in North...