The Higher Judicial Council has not yet voted to appoint North Lebanon First Investigative Judge Samaranda Nassar to this controversial position, as proposed by Justice Minister Henri Khoury. For now, Judge Tarek Bitar remains in his post. 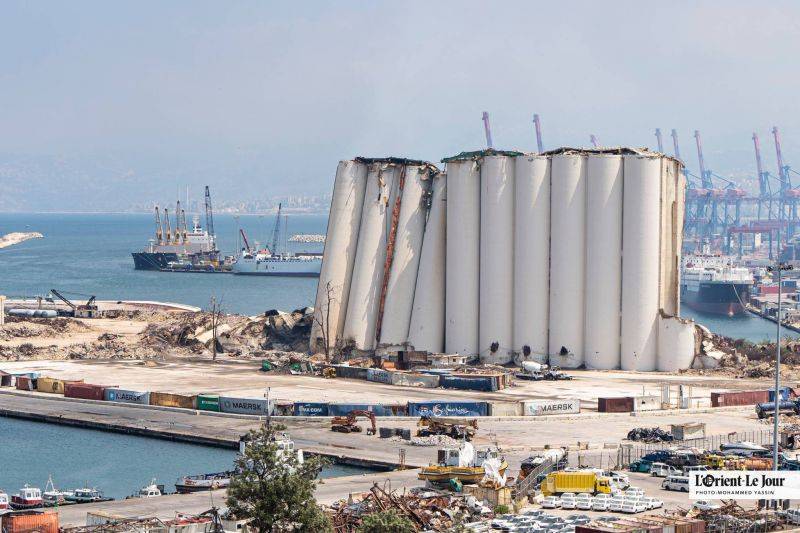 The port silos just before the collapse of the northern block. (Credit: Mohammad Yassine)

Justice Minister Henri Khoury has walked the walk. He announced Tuesday, after a meeting with President Michel Aoun, that a judge would be appointed shortly to address the “urgent matters” related to the probe into the Aug. 4 Beirut port explosion, especially the fate of detainees in the case.

L’Orient-Le Jour learned from judicial sources that Khoury made his announcement after first proposing that Samaranda Nassar, North Lebanon first investigative judge, to the Higher Judicial Council as a replacement for acting Judge Tarek Bitar.

Judge Nassar is known to be close to the Aounist camp, as is Khoury himself. The latter’s move comes amid an outcry in legal circles, which condemn the move to appoint an alternate judge. The Higher Judicial Council adopted Khoury’s proposal on Sept. 5, in violation of the law that allows for the appointment of only one judicial investigating judge. For now, Bitar remains at his post.

A source close to the Higher Judicial Council told L’Orient-Le Jour that, for this jurisdictional body, a judge appointed in this framework would not be a substitute. That is to say, a newly appointed judge would not replace the permanent judge, but rather would be entrusted with only specific issues.

To observers, the decision taken by the Higher Judicial Council was the result of pressure from the Aounist camp. On the same day, a delegation of Aounist MPs went to the HIgher Judicial Council’s president, Souheil Abboud, to urge him to speed up the course of justice.

The meeting followed a sit-in organized in front of the Beirut Justice Palace by the detainees’ families, including the family of the former director of customs, Badri Daher, who is close to the Free Patriotic Movement. At the same time, Deputy Parliament Speaker Elias Bou Saab, also close to the president, partially blamed the Higher Judicial Council for the investigation freeze.

Divisions within the Higher Judicial Council?

As things stand, the proposal to appoint Judge Nassar would only need the Higher Judicial Council’s approval to be enacted. No such decision has yet been taken, due to a division within the council, according to an informed judicial source.

Of the 10 members on the council, only six sit at present to discuss the issue. Court of Cassation Public Prosecutor Ghassan Oueidat recused himself due to his family relationship with MP Ghazi Zeaiter, who has been called for questioning by Bitar.

Judicial Inspection Authority head Judge Barkan Saad, who was a member of the Higher Judicial Council, recently retired. The two remaining posts, reserved for presidents of chambers of the Court of Cassation, remain vacant because the retired judges have not yet been replaced.

The ruling vote requires only a simple majority, but discussions are underway to require a unanimous vote, according to information obtained by L’Orient-Le Jour.

Judge Abboud “insists in particular … on the criteria of neutrality [of a new judge],” a source close to the Higher Judicial Council said.

Speaking to L’Orient-Le Jour, a senior judge who declined to be named said that Judge Nassar was approached because “the minister and the camp he represents are confident of her judgement.”

“They know that she would be receptive to their demands,” he said, recalling that “the main objective [of the Aounist camp] is to release the detainees, especially those who are close to them.” Nassar is known to be close to the FPM leader, Gebran Bassil, the judge added.

Nassar could not be reached for comment Friday. L’Orient-Le Jour also reached out to Minister Khoury for comment, but received no reply.

An appointment after more than one rejection

According to a source informed of the case, Nassar’s name was suggested among several others. Fadi Onaissi, president of the North Lebanon Court of Appeals, reportedly refused the post, as did Mount Lebanon Investigative Judge Nicolas Mansour, who considers the appointment of an alternate judge to be inappropriate, according to the same source.

This source explained that Judge Mansour’s opposition to the appointment of an alternate judge centers on one important question: how could a new judge process requests for detainees’ release if he has no knowledge of the investigation? But, at the same time, if the designated judge were to consult the file, he would violate the secrecy of the investigation, the source added.

At the same time, according to this source, Mansour believes that Bitar could be prosecuted for obstruction of justice if he refuses to entrust part of the file to the appointed judge. However, Bitar reportedly would not agree to voluntarily hand over his file, as already stated by a senior judge on a previous occasion.

There is hope within lawyers’ circles that the Higher Judicial Council will not proceed in its decision. Nader Gaspard, president of the Beirut Bar Association, urged the judicial body Wednesday to refrain from appointing a new judge.

In a missive sent to the Higher Judicial Council, Gaspard said Bitar’s investigation was frozen due to legal actions that cannot be resolved because the draft law to appoint new members to the Court of Cassation — which has the jurisdiction to rule on such issues — has been blocked.

Gaspard also lamented Khoury’s use of the term “urgent matters,” which he says are not well defined. “Vague language would allow the newly appointed judge to broadly interpret their prerogatives,” Gaspard warned.

Youssef Lahoud, a lawyer and member of the prosecution office with the Beirut Bar Association, said he believes the appointment of an alternate judge is likely to be challenged before the Shura Council.

“Faced with the illegality of such a decision, we must expect rapid developments,” Lahoud said without giving further details.

Another lawyer pointed out that if an alternate judge were to be appointed, their work could be paralyzed by the same judicial means the implicated officials resorted to with Bitar.

Anger among the victims’ families

For their part, the victims’ families intend to fight the appointment of an alternate judge.

“We are going to confront anyone who politicizes and hinders the case,” said Mariana Fodoulian, sister of a victim of the blast. While Fodoulian did not specify which actions the families intend to take if a new judge is appointed, she recalled the sit-in organized in front of the justice minister’s home in Hazmieh one day after the Higher Judicial Council’s decision to adopt the latter’s proposal.

“We will not let them carry out their political agendas,” she continued, accusing the Aounist camp of seeking the release of Daher before the end of Aoun’s term, which expires on Oct. 31.

“They want to choose an alternate rather than allow the existing judge to resume his investigation,” Fodoulian said. “They invoke human rights reasons in reference to rights of detainees. Where were human rights when the ammonium nitrate, which caused this tragedy, entered the port … and exploded?”

Justice Minister Henri Khoury has walked the walk. He announced Tuesday, after a meeting with President Michel Aoun, that a judge would be appointed shortly to address the “urgent matters” related to the probe into the Aug. 4 Beirut port explosion, especially the fate of detainees in the case.L’Orient-Le Jour learned from judicial sources that Khoury made his announcement after first...