The Higher Judicial Council's decision to appoint an alternate judge is seen as a 'disguised dismissal' of investigating judge Tarek Bitar, in an attempt to bury his investigation. 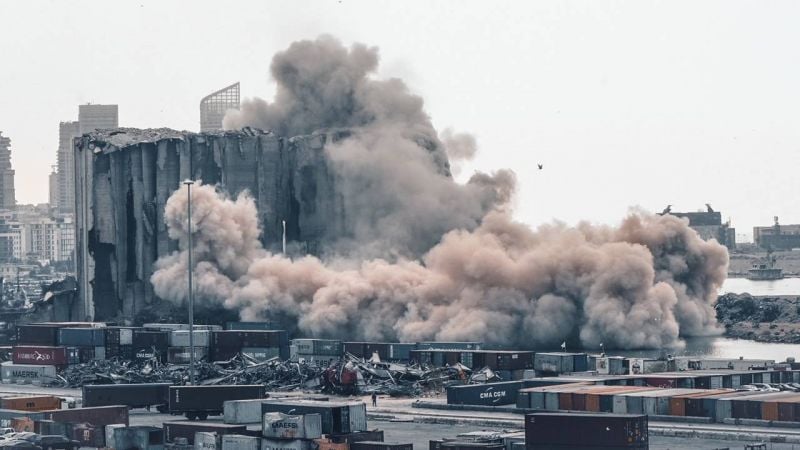 The huge amount of dust generated by the partial collapse of the silos at the Port of Beirut. (Photo: Mohammad Yassine)

For a year now, the ruling class — several members of which are facing prosecution in the Aug. 4, 2020 probe — has persistently obstructed the investigation through legal and judicial abuse, blatant political interference and even threats.

Today, the political-judicial authority seems to be taking it to the next level. The investigation has never been so close to its capital sentence. Judge Bitar has resisted, as David resisted Goliath. But can he evade this deadly blow?

A stab in the back of justice

The final nail in the coffin of the investigation file was the decision made by the Higher Judicial Council on Tuesday to appoint an alternate judge to rule on “urgent” matters, since Judge Bitar cannot resume his examination of the case.

Bitar’s hands are tied because of the multiple arbitrary legal claims launched against him by officials implicated in the case.

HJC made their unanimous decision based on the proposal of caretaker Justice Minister Henri Khoury, who is close to the Aounist camp and under pressure from the Free Patriotic Movement.

This measure is described as “illegal,” “shameful,” or “abominable” by many legal experts familiar with the Code of Criminal Procedure, which provides for the appointment of a single investigating judge.

“It is a stab in the back of Tarek Bitar, of his investigation and of justice,” a senior judge told L’Orient-Le Jour.

Khoury: Victims are blocking the investigation

The justice minister justified his approach by citing “humanitarian” considerations in relation to the ailing detainees who, if a substitute judge was appointed, would be able to request their release from custody.

According to Khoury, it is the victims’ families who are blocking the case.

“If the families of the victims and their lawyers want to speed up the investigation, they must urge the judges in charge of ruling on the recusal requests filed against Judge Bitar to hasten their ruling,” he told L’Orient-Le Jour.

The Supreme Council: A path to justice that has never worked?

It should be remembered that a request to recuse Judge Bitar was brought forward in late June by Customs Chief Badri Daher, who is still under arrest. It is unclear why the third chamber of the Court of Cassation, chaired by Suheir Harake, which is in charge of ruling on the request, has not yet done so.

It is also unclear why the Court of Cassation’s plenary assembly did not immediately rule on the lawsuit filed by former Minister Youssef Fenianos, alleging “serious faults” by Bitar in December 2021.

The plenary assembly still had a quorum for its meeting when the complaint was filed, but lost its quorum on Jan. 12, 2022.

According to Joseph Samaha, former acting president of the Court of Justice, the study of such a lawsuit should not require much time.

“The presidents of the chambers of the Court of Cassation who make up its assembly know well that this lawsuit is inadmissible in the absence of a final decision by the judge who is targeted by the lawsuit,” Samaha said. “In this case, Judge Bitar had not issued any decision.”.

“Why has not the assembly ruled?” he asked.

The examination of lawsuits does not depend on the judges, but on political will. The first civil chamber of the Court of Cassation, chaired by Naji Eid, cannot rule on other legal actions brought by MPs Ghazi Zeaïter and Ali Hassan Khalil, who are implicated in the case.

This is because judge Eid himself has his hands tied because these two Berri MPs filed a lawsuit alleging “serious faults” by Judge Eid in February. Knowingly, the plenary assembly has not met since January due to a lack of quorum.

It has been impossible for the assembly to meet since April because Finance Minister Youssef Khalil, who is close to the Berri camp, blocked the draft decree prepared by the HJC to appoint six of the ten presidents of the chambers of the Court of Cassation, which make up the plenary assembly.

Khalil justified this freeze by claiming the assembly’s formation, as proposed by the HJC, is not in line with sectarian parity because it consists of five Muslims and five Christians members, in addition to the first president of the Court of Cassation, Souheil Abboud, who is Christian.

Nevertheless, this same formula has been practiced since the Taif Agreement, and former Finance Minister Ali Hassan Khalil himself signed a draft decree involving the same composition.

According to a judicial source, the HJC refused to change the distribution of positions. Last week, it sent its draft decree to the Minister of Justice as it was.

Minister Khoury is now faced with two options: approve the draft and send it to the minister of finance, as he did the first time; or to refuse to sign it.

If the justice minister abstains from signing, it would signify Khoury adopts the same position as Youssef Khalil. The minister was not available to clarify this point to L’Orient-Le Jour. 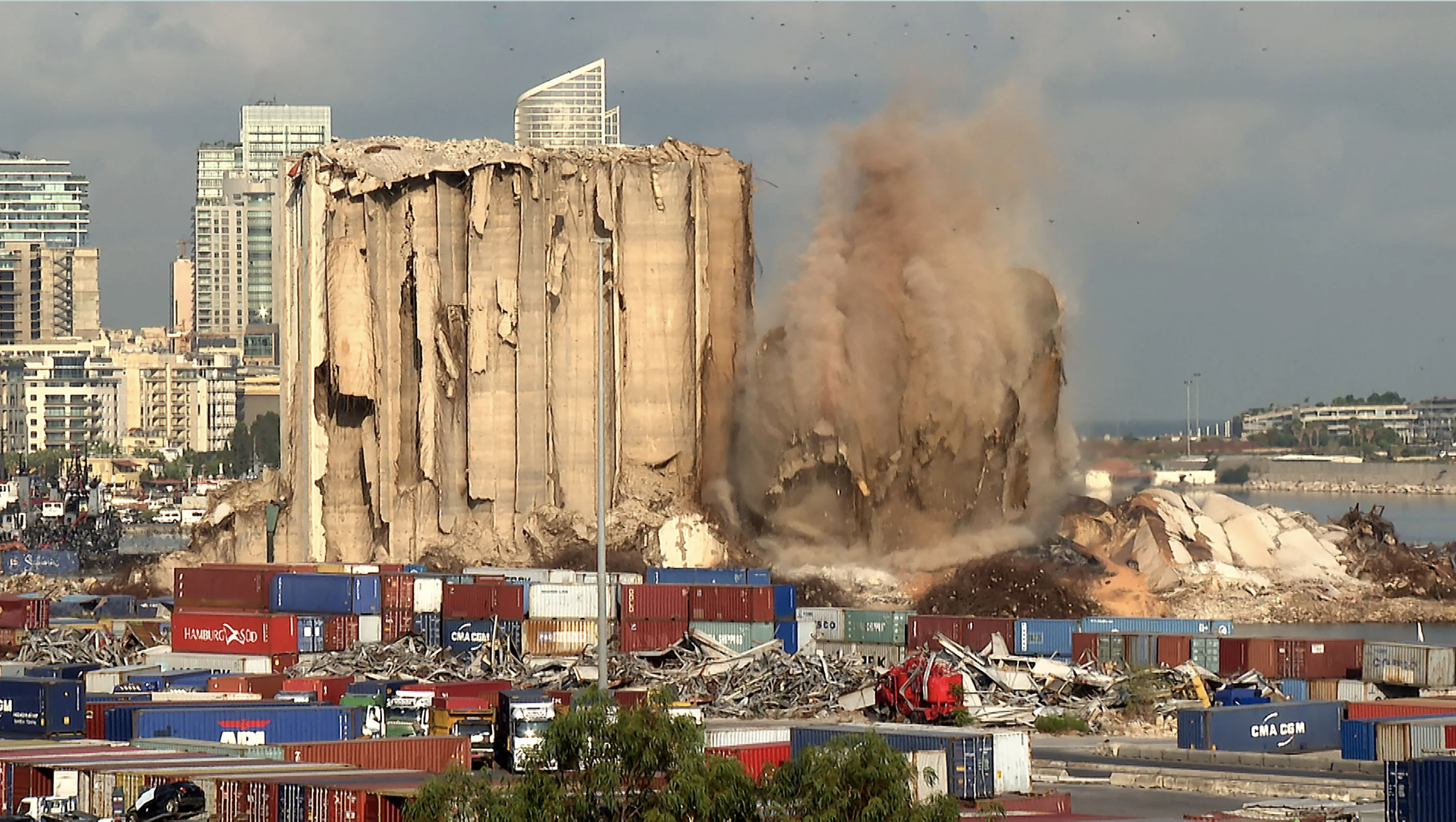 Screen capture of a video showing a partial collapse of the silos at the port of Beirut, August 23, 2022. (DYLAN COLLINS/AFPTV)

Faced with the current impasse, Judge Samaha did not seem optimistic about the outcome of the investigation. He blamed the obstruction on the “tyranny” of the ruling authority which, according to him, is working to ensure the impunity of its implicated members.

He also denounced the “weakness” of “biased” judges.

According to Samaha, even in the absence of a quorum, the plenary assembly of the Court of Cassation can meet.

“The acting presidents of the chambers of the Court of Cassation, who are acting members of the assembly, can decide on the legal actions,” he said. ”Particularly since they have the same prerogatives and competences as the permanent judges who … they replaced.”

For him, the judicial procrastination serves the policy of the ruling caste, which is to “gamble on the time factor until the victims’ families become despondent.”

Samaha noted that investigations of many large profile cases have remained at “square one,” including probes into the assassination of former President Rene Moawad and the disappearance of Lebanese citizens in Syria.

“There is a clear will to drown this case,” said Melhem Khalaf, Forces of Change MP and head of the prosecution office with the Beirut Bar Association, which defends victims’ rights.

“But in the face of the attempts to torpedo the case, we will not give up: we will continue the fight we have been waging since the day that followed the disaster,” Khalaf said.

Last Wednesday, the prosecution office held an emergency meeting. “We developed a strategy based on the available legal and judicial means to counter the appointment of a substitute judge,” said Khalaf, without giving further details.

These means could include targeting the newly appointed judge with recusal requests, in a bid to prevent him or her from examining the case.

For Khalaf, the battle against the political power “has taken on and has polarized the case.” He criticized the Ministry of the Interior which “refused to implement the decisions of Judge Bitar,” including arrest and bench warrants.

Khalaf also denounced the “failure” of the Public Prosecution at the Court of Cassation, which is supposed to represent society.

“The prosecution is absent. It does not fulfill its role of pursuing the public prosecution as Article 360 of the Code of Criminal Procedure," he said.

There is also a lack of international cooperation. Khalaf said Judge Bitar sent letters rogatory to 16 states, but only five responded. He also pointed out that no country has given the investigator satellite images of the blast.

Scotland Yard did not respond to Lebanese requests for assistance. The FBI issued a report based on information collected by local security services. France delivered three preliminary reports, but did not send its final report.

A source at the French embassy told L’Orient-Le Jour that all requests submitted to France by the judiciary were met.

In the aftermath of the explosion, French President Emmanuel Macron made an impromptu visit to Beirut where he called for, “an open and transparent international investigation to prevent things from being hidden.”

“This is a sovereign choice that France and countries friendly to Lebanon have respected … [by sharing] technical reports and available satellite images,”the French president said.

“Our willingness to continue this work is total,” he said, stressing on the need to resume the investigation and ensure justice is served.

“Support for an international investigation mechanism is being hampered because of France’s reluctance,” said Tracy Naggear, the mother of three-year-old Alexandra, one of the youngest victims of the blast.

“This is what Human Rights Watch — with whom we cooperate in lobbying — learned after sending three petitions to the UN Human Rights Council, urging it to adopt a resolution calling for an international investigation,” Naggear said.

“We will continue throughout our lifetime to search for the smallest clue that could help to put the puzzle together. But we feel alone,” she said.

Naggear’s resentment deepened on Tuesday, when the HJC announced its decision to appoint a substitute judge. “Justice has betrayed us,” she said, and expressed fear that “in this judicial context, the truth will not be revealed.”

A big step in the investigation

To this day, Bitar continues ready for a standoff, while the latest moves by the justice minister and HJC are described by many as a “disguised dismissal.”

“The HJC has unfortunately transferred the arm wrestling between Judge Bitar and politicians to the Justice Place,” a jurist told L’Orient-Le Jour.

“In a bid to confront the pernicious maneuvers of the political-judicial power, Judge Bitar is searching for legal means that would allow him to continue his investigations,” said a senior judge, arguing that “[Bitar] draws his strength from the law.”

“Out of respect for all victims, Judge Bitar is keen to do them justice, especially since he has made major progress in his investigation,” the judge said.

“Judges who are as professional, conscientious and courageous as Tarek Bitar are not many,” said Judge Samaha, adding his fear that an alternative investigation could result in the prosecution of “scapegoats,” not the bigwigs.

The current investigation is therefore in a life-threatening situation. It depends on who, in this test of strength, will give up first: Judge Bitar or the officials implicated in the case.