Here’s what happened yesterday and what to expect today, Friday, Sept. 23: 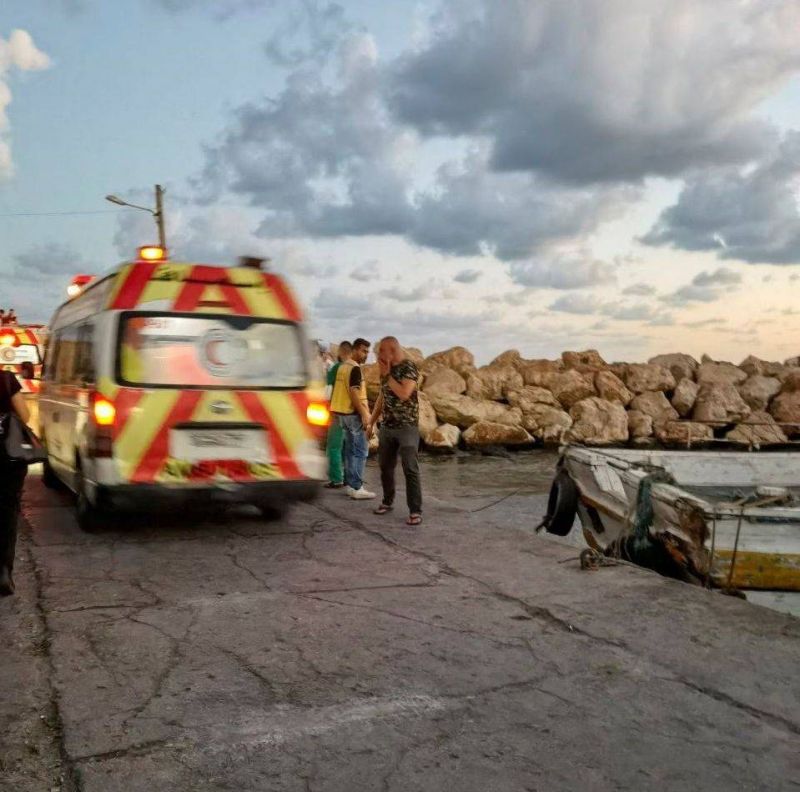 An ambulance is seen during the rescue process of migrants in the port of Tartus, Syria Sept. 22, 2022 in this picture obtained from social media. (Credit: Saleh Sliman/via Reuters)

The number of sea migrants who were found dead yesterday following a shipwreck off the northwestern Syrian port city of Tartus rose to more than 70 today, while the number of survivors increased to 21, our correspondent in the north reported, quoting Syrian authorities. The boat had set sail from the Minyeh, North Lebanon, toward Italy carrying 120 passengers including elderly people, women and children from all three nationalities — Lebanese, Syrian and Palestinian. It is not clear how many Lebanese are among the 46 dead. The 21 survivors, among which six are Lebanese, 11 are Syrian and four are Palestinians, were transported to al-Bassel hospital in Tartus to receive medical care. According to our correspondent, many Lebanese relatives of the bereaved families crossed the northern Lebanon border over to Tartus to closely follow up on their relatives' situation. The funeral of two young girls, who are among the victims of the capsized boat, took place this morning in the northern city of Akkar, while their brother survived and is currently being treated at al-Bassel Hospital, but the mother and her other son, who were also on board of the migrant boat, have not been found yet. Yesterday, relatives of migrants whose boat departed Lebanon last week and has been missing for 72 hours blocked a road in Tripoli, calling on Lebanese authorities to take action. Later in the day, one of the migrants’ relatives told L’Orient Today that the passengers had been rescued by the Greek coast guard and then transported to Izmir, Turkey, after their boat broke down near Crete, Greece. Amid Lebanon’s economic collapse and deteriorating living conditions, UNHCR spokesperson Dalal Harb told L’Orient Today that attempts to migrate by boat have doubled in 2022 for the second year in a row, with a 135 percent increase in the number of passengers attempting to undertake illegal migration by boat.

This is a developing story and the death toll has been on the rise as rescue missions continue.

“The time to act is now,” European Union ambassador to Lebanon Ralph Tarraf said, expressing concern over delays in implementing reforms after a meeting joining European Union ambassadors and the Parliament’s Finance and Budget Committee. “For the first time we directly tackled the practical and real obstacles,” committee head MP Ibrahim Kanaan said. Tarraf “implored MPs to live up to their responsibilities” in implementing reforms paving “the path to recovery” such as “passing a realistic budget, bank secrecy, and capital controls law.” The International Monetary Fund included the aforementioned reforms in an April preliminary agreement with Lebanon as conditions the country must meet to unlock financial assistance. Representatives from the United States, France and Saudi Arabia urged Lebanon to form a government capable of implementing the IMF-stipulated reforms and to elect a president within the constitutional deadline – set at Oct. 31, the end of President Michel Aoun’s term. An IMF delegation released on Thursday an assessment after the end of a three-day visit to Lebanon, saying that “despite the urgency," little progress has been made to implement the necessary reforms.

“The salaries of the public sector employees are not even enough for bread and water,” Public Administration Employees League member Ibrahim Nahhal said amid cross-country protests by civil servants threatening to relaunch their open-ended strike. Public sector employees protested on Thursday in the southern city of Nabatieh and in northern Lebanon’s Tripoli demanding salary adjustments “in line with the rise in the lira-dollar exchange rate.” Widespread state paralysis ensued during public sector employees’ open-ended strike which began in June and unofficially ended around late July after the approval of improved insurance coverage for employees and various financial assistance payments.

Merhi Charity, a Lebanese aid organization, delivered donated diesel to Tripoli to run the city’s hydraulic water pumping stations after a fuel shortage forced shutdown cut off water supply. Tripoli MPs Ashraf Rifi and Abdul Karim Kabbara pledged fuel donations while caretaker Prime Minister Najib Mikati on Wednesday claimed to have ordered a diesel delivery. Protesters decried the water shortages by holding several sit-ins Wednesday evening. Lebanon’s electricity crisis has throttled the water supply as hydraulic pumping stations struggle to operate due to a lack of continuous electricity while interruptions at larger stations trickle down. Last week, state electricity provider Electricité du Liban announced the total shutdown of all its thermal power plants due to a lack of fuel oil. A UN program delivering diesel to water establishments “delivered the last drop of fuel” in early April, then-United Nations Resident and Humanitarian Coordinator Najat Rochdi wrote. The Beirut and Mount Lebanon Water Establishment announced in May it would ration its services for reasons related to the electricity supply. Since then, power shortages have caused issues with water supply across the country. The UN’s Children’s Fund (UNICEF) in July reported a steep increase in the cost of trucked water which citizens have had to resort to amid water shortages.

In case you missed it, here’s our must-read story from yesterday: “A whole new system': Inside the push to implement Lebanon’s new procurement law.”

Want to get the Morning Brief by email? Click here to sign up.The number of sea migrants who were found dead yesterday following a shipwreck off the northwestern Syrian port city of Tartus rose to more than 70 today, while the number of survivors increased to 21, our correspondent in the north reported, quoting Syrian authorities. The boat had set sail from the Minyeh, North Lebanon, toward...