The Fund advocates that the rate of the Banque du Liban's Sayrafa platform become the only rate in effect and thus serve as the basis for the budget calculation. 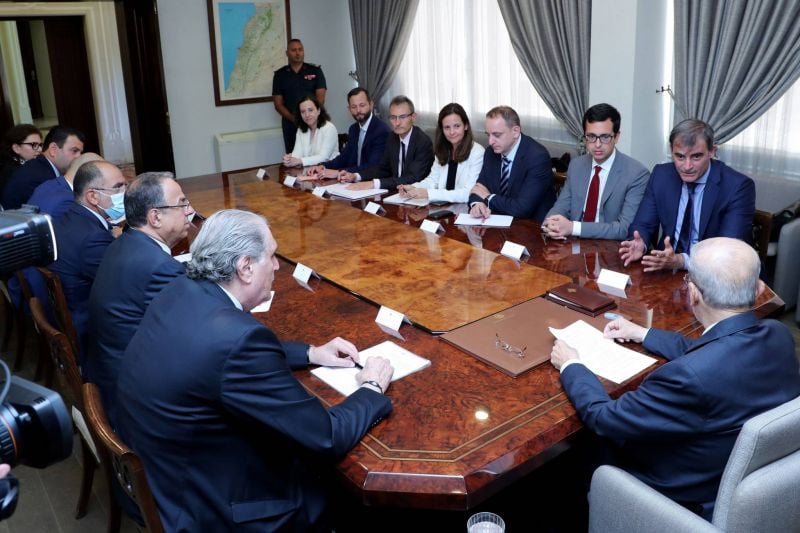 The IMF delegation (right row) during its meeting with the Head of State Michel Aoun in Baabda. (Photo credit: Dalati & Nohra)

The International Monetary Fund (IMF) delegation led by Ernesto Ramirez-Rigo completed its three-day visit to Lebanon on Wednesday, as the country seeks to unlock a multibillion dollar aid package.

On the sidelines of the UN General Assembly in New York, Prime Minister-designate Najib Mikati met Tuesday with IMF Managing Director Kristalina Georgieva, who assured him that the financial institution "was keen to reach an agreement with Lebanon as soon as possible."

But in a statement issued at the end of their visit on Wednesday, the IMF delegation was much harsher in its assessment.

During his visit to Baabda, Ramirez-Rigo said he expected more concrete measures to be adopted after the May legislative elections so that Lebanon and the IMF would reach a final agreement on a financial aid package "between the end of September or early October."

The annual fall meetings between the IMF and the World Bank are scheduled to take place in Washington from Oct. 10-16, which may mean that the IMF is hoping to attend with the Lebanese file in hand.

The IMF's assessment, published on its website, first offers its regret that the Lebanese economy is suffering a "severe depression" and that, "despite the urgency," little progress has been made to implement the necessary reforms, some of which were listed in the April 7 preliminary agreement between Lebanon and the fund.

The IMF also noted the considerable delay in adoption the 2022 budget — which still has not been passed by Parliament — and calls on Lebanese leaders to focus on developing a 2023 budget that is "credible" and based on "realistic" macroeconomic projections.

The new budget should allow the government to "significantly" increase its revenues in order to finance social spending and investments that are commensurate with the challenges, the IMF said.

The IMF also recommended that the Banque du Liban's Sayrafa platform be the only enforced rate and serve as a basis for calculating the budget.

"The existence of multiple exchange rates causes significant distortions in economic activity," said the IMF, which feels the current system fuels corruption and arbitrage, and depletes what remains of the BDL's foreign exchange reserves.

"Market intervention to stabilize the exchange rate has proven ineffective in the absence of necessary reforms," the statement continues. Earlier in the day Wednesday, MP George Adwan, who chairs the parliamentary committee on Administration and Justice, estimated that $3 billion had been injected into the Lebanese economy for this purpose since the beginning of the year.

The IMF reiterated that Lebanon must pass a law establishing formal capital controls to reduce the pressure on foreign exchange reserves. It also commented on the banking secrecy law that was adopted by Parliament at the end of July but was sent back by Lebanese President Michel Aoun— an initiative welcomed by the IMF.

Finally, the IMF said the financial sector resolution strategy prepared by the government must be implemented in such a manner as to restore confidence in the banking sector. The organization maintained that "small depositors must be fully protected" and that recourse to government assets must be "limited." A final version of the government's recovery plan provides for protection of all deposits up to $100,000.

This position implies that the IMF is still planning to make the banks incur a substantial part of the financial losses the country has to absorb, which are estimated around $73 billion.

On the positive note, the IMF stated that the discussions were "fruitful" and that the financial institution remained committed to working with Lebanon to "advance the reform agenda."

The IMF's visit was short but intense.

In 72 hours, it met with the outgoing Vice President of the Council of Ministers Saadeh Chami, caretaker Minister of Finance Youssef Khalil, caretaker Minister of Economy and Trade Amine Salam, and MPs Ibrahim Kanaan and Georges Adwan, chairmen of the parliamentary committees on Finance and Budget, and Administration and Justice, respectively.

Saadeh Chami, himself a former IMF official, heads the group charged with coordinating with the organization. BDL Governor Riad Salameh and the outgoing Ministers of Finance and Economy are also members.

A meeting was also held between the IMF and Banque du Liban officials, as well as a separate meeting the employers' organization, headed by former minister Mohammad Choucair.

According to a statement issued by Baabda, the IMF also met with members of the "financial and banking sectors."

Bank holdup protests, maritime border progress, a new low for the lira: Everything you need to know to...