Many migrants are still missing. 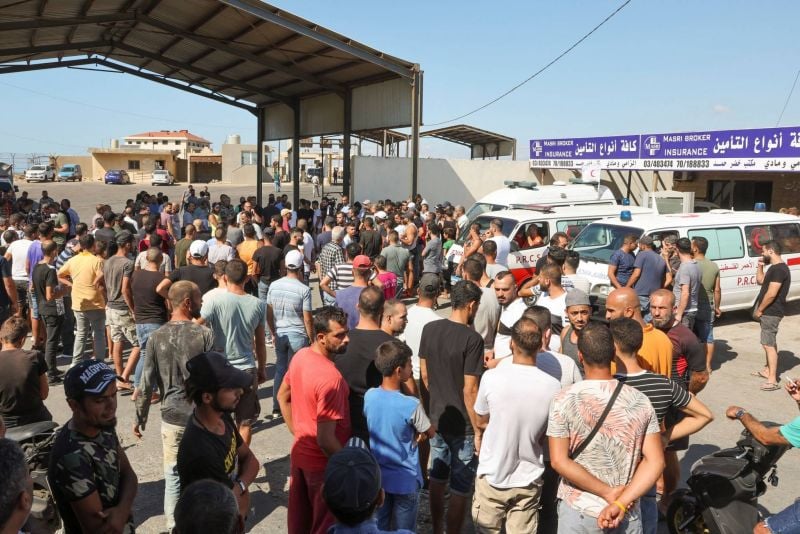 People gather following the sinking of a migrant boat, that according to Lebanese and Syrian officials sank off at Syrian coast after sailing from Lebanon, at the Lebanese-Syrian border crossing in Arida, Lebanon Sep. 23, 2022. (Credit: Mohamed Azakir/Reuters)

BEIRUT — The number of people found dead after their irregular migrant boat capsized off the northwestern Syrian port city of Tartus rose to 87 on Friday evening, according to Lebanese caretaker Public Works and Transportation Minister Ali Hamieh, as reported by the Lebanese National News Agency. The number of survivors currently undergoing treatment at the al-Bassel Hospital in Tartus hasn't changed since the beginning of the day and is still at 20, according to Hamieh.

Nine bodies belonging to Lebanese victims and two to Palestinian victims arrived in Lebanon on Friday.

The boat, on which a Lebanese flag was raised, had set sail from the village of Benin-Minyeh, north Lebanon, earlier this week, toward Italy carrying around 120 passengers including elderly people, women and children from all three nationalities — Lebanese, Syrian and Palestinian. Russian and Syrian helicopters supported the Syrian coast guards and local fishermen who continued the search operations overnight looking for more survivors, according to our correspondent. The Lebanese authorities remain in contact with their Syrian counterparts for updates without intervening in the search operations, Lebanese caretaker Minister of Public Works Ali Hamieh's spokesperson, Hassan Shukair, told L'Orient Today.

It is not clear how many Lebanese are among the dead. According to Hamieh, 19 migrants were rescued, six of whom are Lebanese. Many migrants are still missing.

On Thursday, the Lebanese Army arrested three people accused of allegedly smuggling passengers onto the migrant boat, according to L'Orient Today's correspondent.

Caretaker Prime Minister Najib Mikati said on Friday that he instructed Lebanon's High Relief Commission to coordinate with the families of the boat victims to return their relatives' bodies to Lebanon, according to a tweet. Mikati also instructed Army Commander General Joseph Aoun to "strictly" monitor the Lebanese shores and combat illegal migration crossing and arrest those involved in organizing them.

For his part, President Michel Aoun called on relevant authorities to provide all facilitations for survivors and families of the victims. 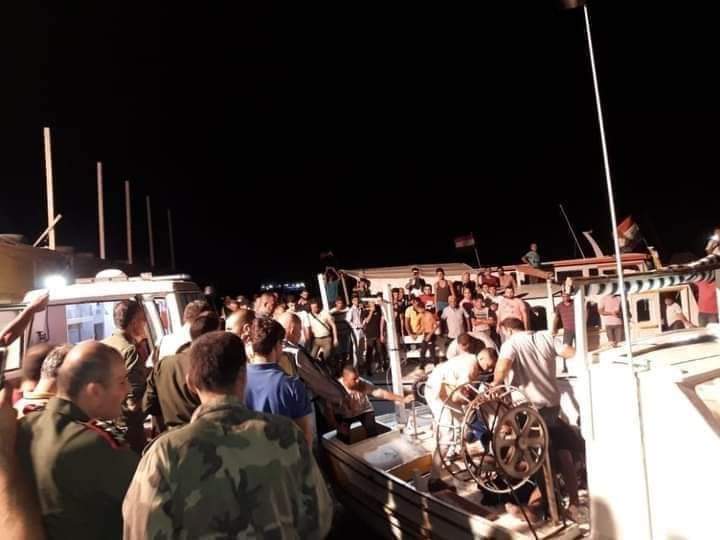 Friday evening, the Lebanese Red Cross received the victims' bodies from the Syrian Red Crescent at the Arida checkpoint on the Lebanese-Syrian border, according to the state-run National News Agency and L'Orient Today's northern Lebanon correspondent. The bodies are of seven Lebanese people and two Palestinians, who were reportedly identified by their relatives.

Nine Lebanese victims' bodies have now been transferred to Lebanon since the tragedy, after the bodies of two girls were transferred and buried Friday morning in their hometown of al-Qarqif, Akkar governorate, our correspondent reported.

Fears that bodies will never be found

The brother of Mustafa al-Manea, one of the boat's passengers who is from Bab al-Raml neighborhood in Tripoli and who remains missing at sea, told L'Orient Today that Mustafa works as a taxi driver, and that "life has become difficult because of the high fuel cost while his income is no longer enough to buy bread and food, and he is not able to enroll his two sons in school, so he chose to migrate by boat after selling his car to pay the smuggler who organized the trip." Mustafa's family has begun to accept condolences fearing that his body will never be found. 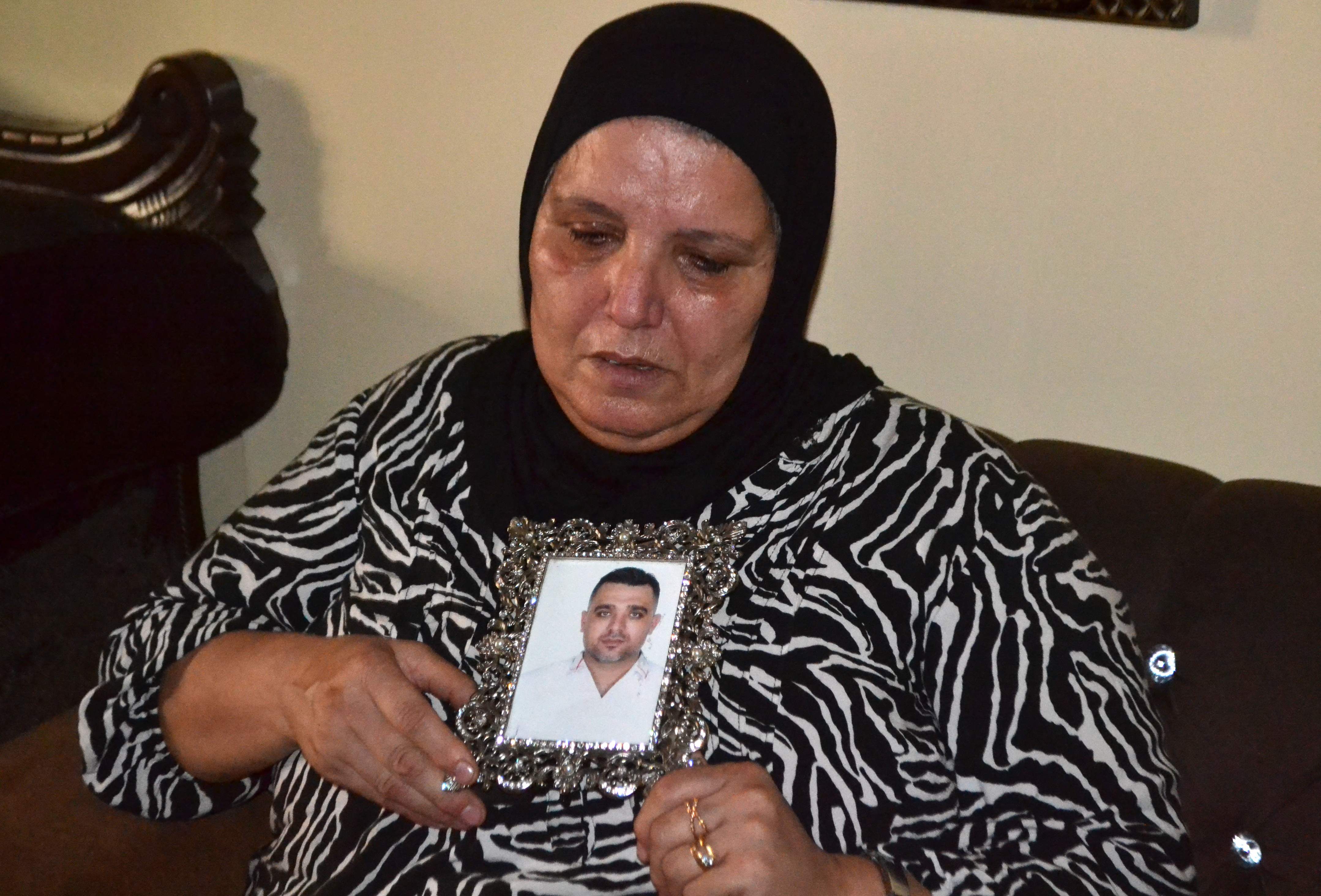 A woman reacts on Sep. 23, 2022, in the northern Lebanese city of Tripoli as she holds a photograph of a family member who drowned a day earlier, in a boat carrying migrants from Lebanon that sank off the Syrian coast. (Credit: AFP)

A member of the family of Samer al-Hosni, another passenger on the boat who is from Bab al-Tabbaneh neighborhood in Tripoli, told L'Orient Today that Hosni survived the tragic incident but that his wife and four children remain missing at sea. The family said that Hosni works as a produce carrier in the city's al-Tal square but that after Hosni lost his job "he was forced to sell everything he owned, even his house windows."

Earlier on Thursday, a relative of migrants in another boat who had left northern Lebanon told L'Orient Today that they were rescued by the Greek coast guard and then transported to Izmir, Turkey, after their boat broke down near Crete. The boat carrying 55 people had left Lebanon last week, and relatives had lost contact with the passengers on Monday. The rescue operation took place on Tuesday.

Alarm Phone, an independent initiative that supports people crossing the Mediterranean Sea, tweeted Thursday regarding another migrant boat, stating that “yesterday relatives informed us about a boat that left Lebanon on September 19 and was in distress in the Ionian Sea. It is reported that they ran out of water and food. We were only able to reach the people once with [a] poor connection.”

The volunteer network reported Thursday evening, quoting Greek media, that the people in distress were transferred to the port of Kalamata Thursday afternoon by two cargo vessels, adding that there were no fatalities and hoping "that the Greek state will respect their right to apply for asylum."

The Lebanese Army carried out a raid on Thursday in the town of Benin in Akkar and arrested two suspects for their alleged involvement in facilitating illegal smuggling across the sea, according to L’Orient Today’s correspondent.

The Lebanese Army also announced that a patrol from the intelligence directorate arrested eight people on Wednesday — four in al-Mina, Tripoli, and four in Deir Ammar, North Lebanon — for allegedly having records in smuggling operations and for allegedly planning an upcoming sea crossing, according to a statement released on Friday by the Lebanese Army. The army also said that gun in their possession was seized, adding that the detainees were handed over to the relevant authorities, who have launched an investigation.

In recent weeks, dozens of irregular migrant boats left the Lebanese coast bound for Europe. Most of the passengers are seeking to escape Lebanon's devastating economic crisis.

Most of these boats — often overloaded with passengers and in dilapidated conditions — do not reach their intended destinations. They are often intercepted by the Lebanese Army or require a rescue at sea. Last week, Italian authorities rescued 250 migrants who had been stuck for several days in the waters off Malta. In April, a migrant boat with dozens of people aboard sank off the coast of Tripoli, North Lebanon, after the Lebanese Army intercepted the vessel. Around 40 people were killed, with dozens still missing.

According to the Turkish coast guard, more than 30,000 irregular migrants were intercepted so far in 2022, more than double the number in the same period last year.

BEIRUT — The number of people found dead after their irregular migrant boat capsized off the northwestern Syrian port city of Tartus rose to 87 on Friday evening, according to Lebanese caretaker Public Works and Transportation Minister Ali Hamieh, as reported by the Lebanese National News Agency. The number of survivors currently undergoing treatment at the al-Bassel Hospital in Tartus hasn't...