Nasrallah calls for 'consensus' around a presidential candidate

Hezbollah's secretary-general maintains that the changes in UNIFIL mandate are "a trap that has been set by the enemy for many years." 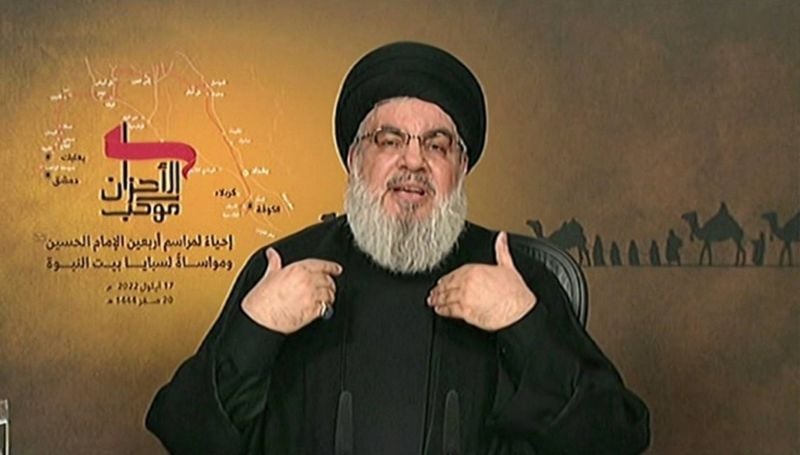 An image grab from Hezbollah's al-Manar TV on Sept. 17, 2022, shows the head of Hezbollah Hassan Nasrallah delivering a televised speech to mark the holy day of Arbaeen. (Credit: Al-MAanar/AFP)

Hezbollah Secretary-General Hassan Nasrallah called on Saturday for "a consensus on the name" of a candidate for the presidency of Lebanon, "far from the political vetoes." The country entered its presidential election period, which lasts two months, at the beginning September.

While some political forces are calling for the election of a "confrontational" candidate to face the party, others are advocating the advent of a "consensus" personality, who would not oppose Hezbollah in an overtly confrontational way.

In a speech delivered on the occasion of the 40th day following the commemorations for the martyrdom of Imam Hussein, grandson of the Prophet Mohammed, the Hezbollah leader also blasted the changes made to the mandate of the United Nations Interim Force in Lebanon (UNIFIL), in the resolution extending the mandate of this force for one year, seeing it as "a trap that the enemy has been setting for Lebanon for many years."

New amendments to this text have indeed gone almost unnoticed but strongly displease the pro-Iranian formation, including a sentence giving the right to UNIFIL to "carry out its tasks independently" without having to be accompanied by the Lebanese Army.

Incidents have occurred in recent months between UN patrols, deployed as a buffer between Israel and Lebanon, and residents of southern Lebanon, an area inhabited by large numbers of Hezbollah supporters.

Nasrallah also reiterated the need to hold the presidential election "within the constitutional timeframe" as the current head of state Michel Aoun's term approaches its end on Oct. 31.

Efforts to find a consensus candidate kick off

"There are calls for unity around a president, and we call for a consensus on a name, far from vetoes," he said, seeming to align with the idea of choosing a consensus candidate.

Nasrallah made these remarks at a time when political negotiations are in full swing to try to reach an agreement on presidential candidates. An initiative of the Forces of Change MPs, who are meeting successively with all the parliamentary blocs, aims to unite the political forces around a name. Last Wednesday, the leader of the Kataeb party, Samy Gemayel, a determined opponent of Hezbollah, appeared to extend a hand to the party by offering to support to the election of  "a rescue president" for a country in the midst of an existential crisis.

The Hezbollah chief also expressed his "great hope" that a new government will be formed "soon" to prevent the country from falling into chaos, as some fear a total political vacuum in the executive: no president and a caretaker government, a status the current cabinet assumed following parliamentary elections in May.

Such a political vacuum would be a first in Lebanon's history. Hopes that such an outcome will be avoided were rekindled with the latest visit of Prime Minister-designate Najib Mikati to Baabda as part of the government formation negotiations. On his way out of the meeting, Mikati stated that his next meeting with Aoun will last until a ministerial team is formed.

'Subsidence of the state'

On the subject of amendments brought to the final text of UN Resolution 2650, which extends the mandate of UNIFIL until Aug. 31, 2023, Nasrallah reacted by denouncing "one of the signs of the collapse of the Lebanese state, a dangerous subject and with much more dangerous consequences." He went on to say that this change "is a trap that the enemy has been setting for years in Lebanon. We have not been able to find out who is responsible for this; in any case, it is either an ignorant or a conspirator, because it creates an imminent danger in the south and the Bekaa."

On Sept. 12, the chief of staff of the Israeli army, Aviv Kochavi, once again threatened Hezbollah and Lebanon, denouncing the presence of "rockets, missiles, missile launchers and control rooms of operations in the south of the country, south of Beirut and the Bekaa Valley," areas where the party's influence is prevalent.

As for the other contentious issue between Israel and Lebanon, namely the demarcation of their common maritime border, Nasrallah said that "the importance for the Resistance is the return of oil, gas and land, not by begging but by dignity, pride and vigor."

According to him, "no exploitation of the Karish field should begin before Lebanon obtains the area delimited by Line 23," the official claim of Beirut, which recently asked to modify this line to include the entire offshore field of Qana.

"Our red line is the beginning of the exploitation of Karish oil and gas," he added. Energean, a company which specializes in drilling oil and gas wells, announced more than a week ago that it will soon start production in the Karish field.

Nasrallah also referred to the unprecedented economic crisis that is shaking Lebanon, where only a few hours of electricity are provided each day by the official state supplier Electricité du Liban.

Regarding the possibility of a donation of Iranian fuel oil to run the EDL's power plants, he said that "a delegation will go to Iran to solve this problem, in order to get help to increase the hours of [power] supply."

"This assistance is a real promise, and the horizon will clear on this issue in the coming days," he continued. Hezbollah's critics often blame it for its assumed affiliation with the Islamic Republic of Iran, which they say threatens Lebanon's sovereignty.

The Hezbollah secretary-general lastly mentioned the September 1982 massacre in Sabra and Shatila. "The Israeli enemy participated in it, but the real perpetrators of the massacre came from some well-known Lebanese parties who collaborated with the enemy in the 1982 massacre," he said, denouncing "the most serious and horrible massacre in the history of the Arab-Israeli conflict."

Sabra and Shatila: What we know and (still) don’t know 40 years later

Nasrallah also used his speech to slip a dig at the leader of the Lebanese Forces Samir Geagea, who multiplies attacks against Hezbollah: "The massacre of Sabra and Shatila is your culture. And thank God we don't look like you," he said. A few days ago,  Geagea wrote on Twitter: "You have your Lebanon, we have ours," a comment widely perceived as being addressed to Hezbollah and its political allies.

Hezbollah Secretary-General Hassan Nasrallah called on Saturday for "a consensus on the name" of a candidate for the presidency of Lebanon, "far from the political vetoes." The country entered its presidential election period, which lasts two months, at the beginning September. While some political forces are calling for the election of a "confrontational" candidate to face the party, others are...