Rami Ollaik, of the Mouttahidoun law group, 'encourages' depositors to use force to recover their blocked funds 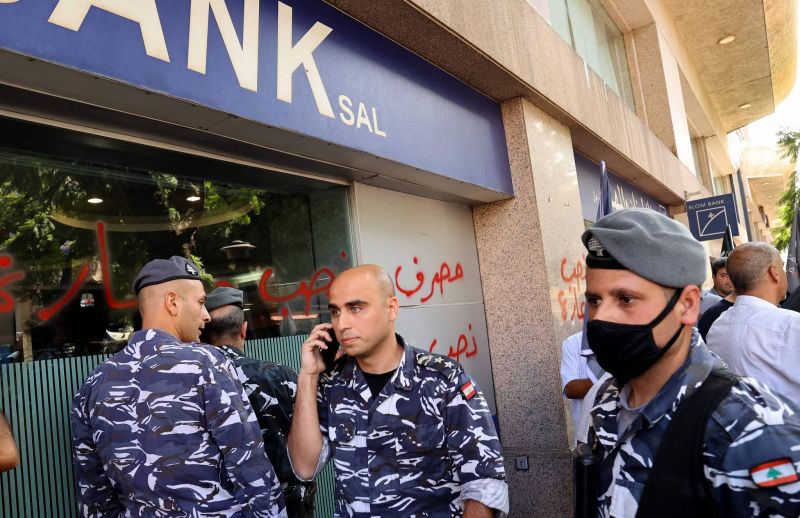 BEIRUT —Two hostage-takings took place almost simultaneously in Lebanon on Wednesday, the first at a Blom Bank branch in Sodeco, Beirut, and the second at a bank in Aley, southeast of the capital.

These actions were "coordinated" by associations defending the rights of depositors, lawyer and activist Rami Ollaik confirmed to L'Orient-Le Jour.

In both incidents, depositors took the banks hostage with the aim of accessing funds in their own accounts, upon which the banks have imposed illegal restrictions since 2019. 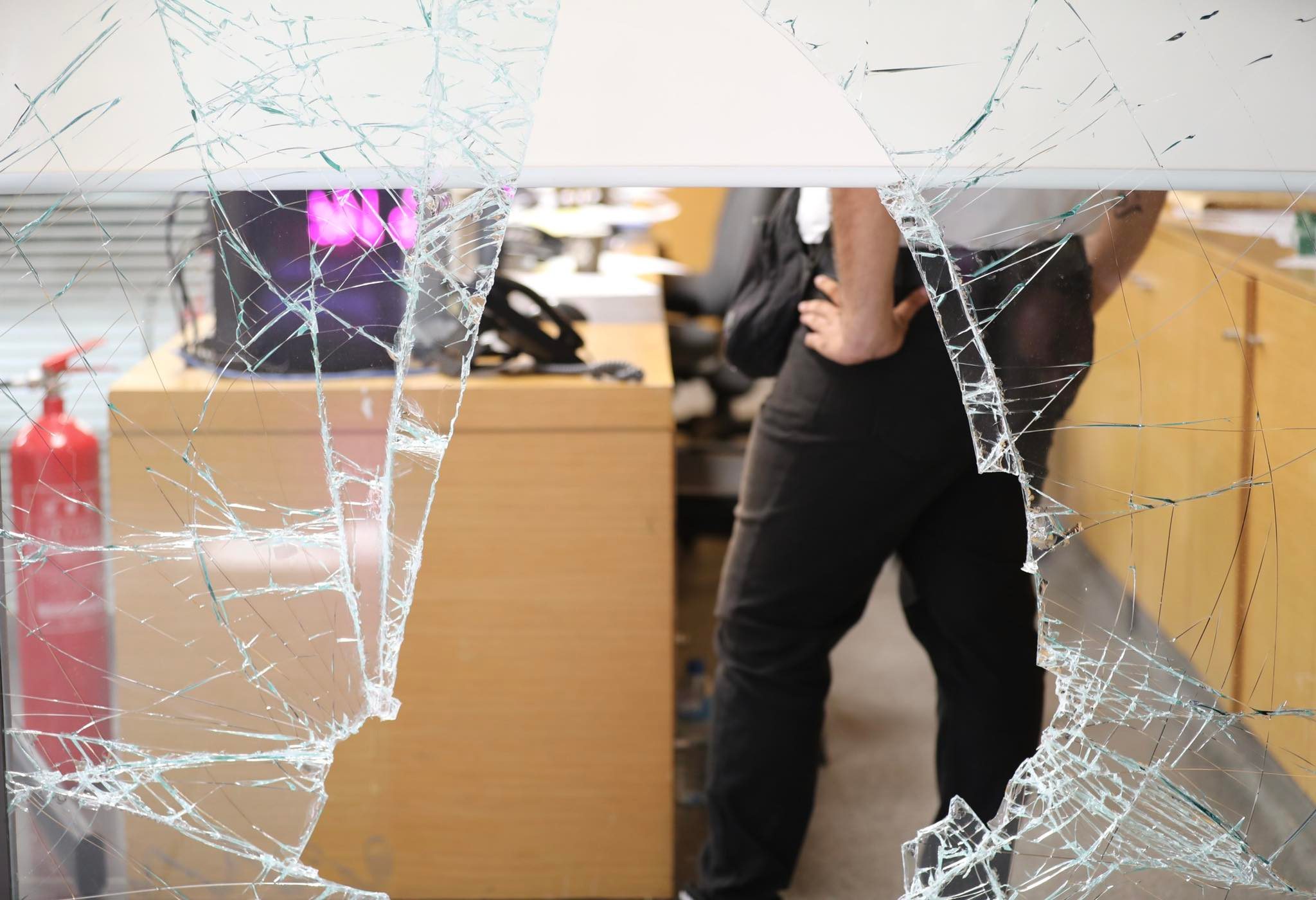 A security agent inside the Blom Bank Sodeco branch, after a hostage-taking, on Wednesday morning. (Photo credit: Matthieu Karam)

Ollaik — who also founded the Mouttahidoun alliance to defend Lebanese depositors against the banks — confirmed in a voice message to L'Orient-Le Jour that several coordinated actions were carried against banking institutions on Wednesday, and that more will follow. Wednesday's events were coordinated by bank customers and the Association of Depositors in Lebanon.

In Sodeco's Blom Bank branch Wednesday morning, Sali Hafez, filmed herself demanding her own money "for her sister who has cancer and is dying in the hospital."

"I am not here to kill or set fire ... I'm here to claim my rights," Hafez said, according to AFP. An eyewitness interviewed by L'Orient-Le Jour said Hafez doused herself with gasoline and threatened to set herself on fire. Her sister was also at the scene.

Sali Hafez was supported by activists and relatives, said Ollaik. "[Hafez] is my client ... I went with them to the bank, I support this action, and I helped them accomplish it with the necessary force, so that they can recover their deposits," said Ollaik in a message sent via WhatsApp. "The hostage taker's sister has a terrible cancer and the banks refuse to give money for this kind of case," he continued, before "encouraging people to use this type of action to recover their funds, but only for this purpose."

The husband of a woman who was present during the incident said Hafez "threatened [his wife] with a gun to her head." In an interview with a local media after the event, Hafez said she recovered about $13,000 of the $20,000 her family had deposited in the bank. The cost of her sister's care was $50,000, she said, adding that the weapon she used during the incident was fake. 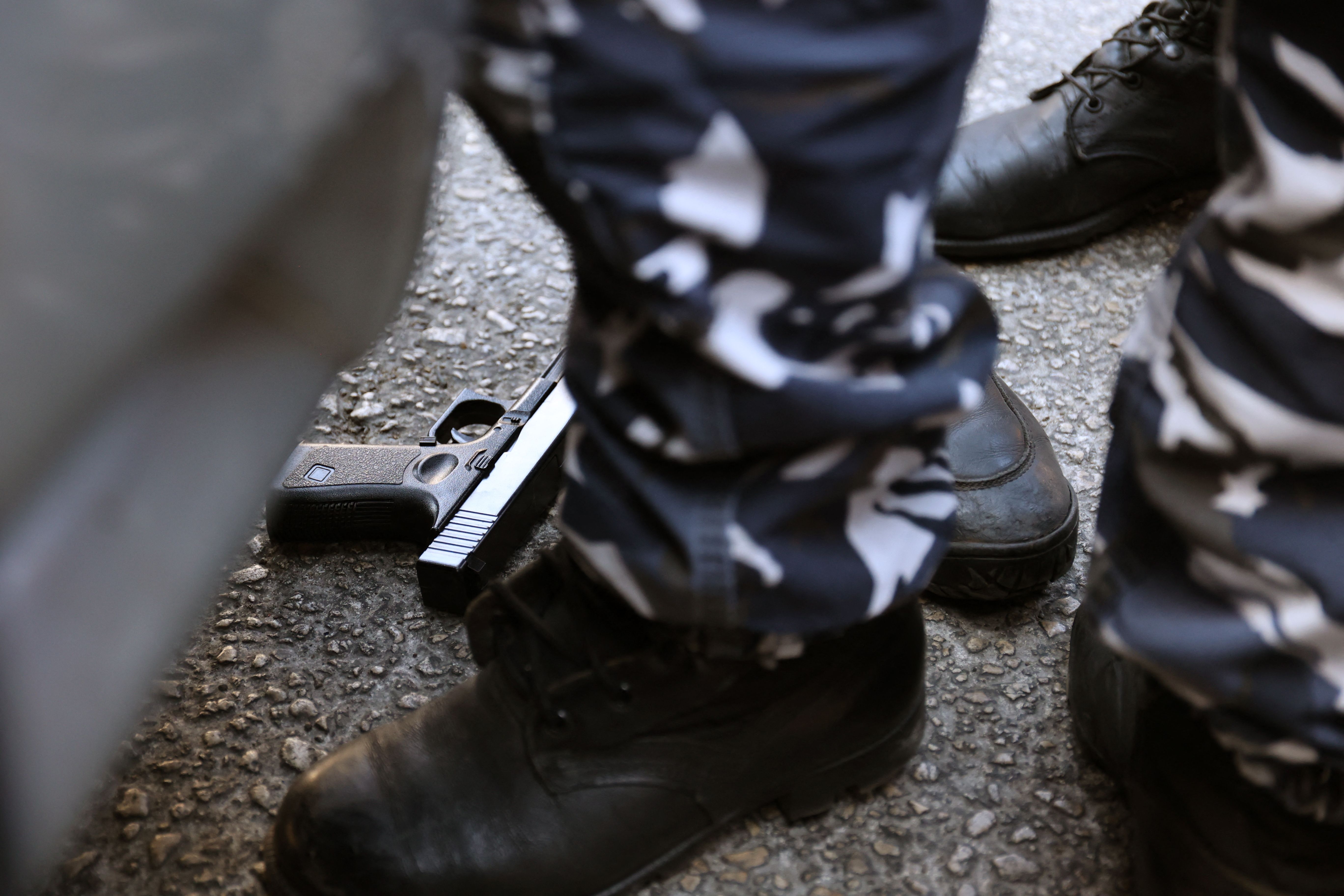 After obtaining her funds in less than an hour, Hafez and her accomplices managed to escape through a window before the arrival of security forces. However, two people were arrested by law enforcement, according to Ollaik.

Sali Hafez is a 28-year-old interior designer and activist in the 2019 protest movement against the political class, her sister Zeina told AFP. According to Zeina, the family was not aware of her intention to rob the bank.

She was hailed as a hero by many internet users in Lebanon, where images of the young woman standing on a desk in the bank made the rounds on social media. "Thank you! Two weeks ago, I was in tears at Blom Bank. I needed money for an operation," wrote one Internet user.

A few hours after the incident, Blom Bank confirmed in a statement that the customer had come to the Sodeco branch on Tuesday and spoke with its manager. She reportedly asked him to withdraw a certain amount of money to help her sister and the manager "showed full cooperation," according to the statement.

"The branch [employees] were surprised by the arrival of the client, her sister and a large group of people, who held employees and customers hostage," the bank also said in the statement. "[They] threw gasoline at those who were there and threatened to burn them, destroyed some of the bank 's property and threatened [employees and customers] with weapons." The statement claimed the incident was "preplanned with the goal of causing hurt." According to Blom Bank, "the client had not come to the branch or done any bank transaction for over a year and a half."

The bank has 'succumbed'

Meanwhile, in the early afternoon, the Association of Depositors in Lebanon announced a similar hostage situation was underway at a BankMed branch in Aley. "BankMed branch of Aley succumbs to depositors," the association posted to its Twitter account Wednesday. A few minutes earlier, the same association simply stated: "Immediate irruption in a bank of Aley." According to the National News Agency, a man was arrested in connection with the BankMed incident. NNA did not specify whether he had managed to withdraw money.

On Aug. 11, an armed customer held up employees and customers for hours at the Hamra branch of Federal Bank. He was briefly detained by the police, given $35,000 and told that he would enter into negotiations with the Federal Bank to demand that he be permitted to withdraw his account balance of $137,000. Citizens mobilized in front of the bank in solidarity.

Last January, an angry customer dozens of employees and customer hostage at a bank in the Bekaa after the bank refused to pay him his savings in dollars. The man, who eventually won his case, surrendered to the police without any casualties.

BEIRUT —Two hostage-takings took place almost simultaneously in Lebanon on Wednesday, the first at a Blom Bank branch in Sodeco, Beirut, and the second at a bank in Aley, southeast of the capital.These actions were "coordinated" by associations defending the rights of depositors, lawyer and activist Rami Ollaik confirmed to L'Orient-Le Jour.In both incidents, depositors took the banks hostage...