The plan, visibly hampered for political reasons, is being criticized by the UN’s refugee agency, UNHCR, which believes that the factors conducive to the return of the displaced are still not assured. 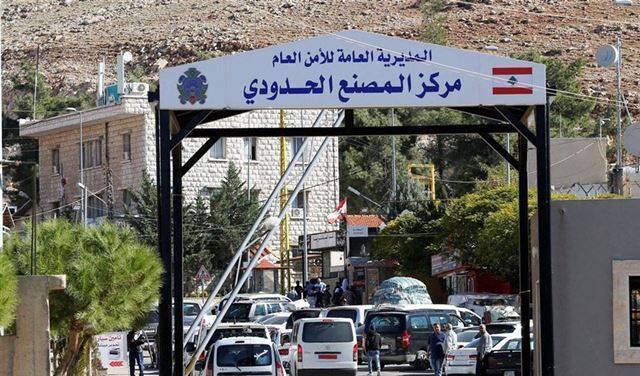 A line of cars at the Masnaa border crossing between Lebanon and Syria. (Credit: NNA)

With almost three months to go before the end of Michel Aoun’s term as Lebanon’s president, the issue of the return of Syrian refugees is back in the spotlight. Launched last July, a plan to repatriate 15,000 Syrians every month is once again being considered by Baabda, despite criticism from the UN High Commissioner for Refugees, which had assured that it was not involved in any negotiations or plans to repatriate refugees from Lebanon to Syria en masse.

After a first meeting Monday between the president and the caretaker ministers of foreign affairs and social affairs, Abdallah Bou Habib and Hector Hajjar, a second meeting was held on Wednesday, in the presence of General Security chief Abbas Ibrahim, in order to discuss the implementation of the repatriation process, which should be organized in collaboration with Damascus.

Announced and discussed in the media by the Minister of Displaced Persons Issam Charafeddine, this plan entails returning 15,000 refugees to their places of origin each month. Under the plan, Damascus would reserve the right to decide on the priority cities.

Charafeddine, who visited Syria last February, says he expects a new meeting in Damascus soon to put the project on track.

‘Half a million in three years’

“During my last visit to Damascus [in February], I understood that the Syrians were ready to embark on this project,” the minister told L'Orient-Le Jour.

“I suggested 15,000 people per month to start with. If we manage to stick to this plan, we will be able to repatriate 180,000 people a year, or half a million Syrians in three years, instead of standing idly by,” Charafeddine said.

According to figures adopted by officials in Lebanon, there are one and a half million Syrian refugees in the country, including 880,000 registered with UNHCR. In recent years, General Security has organized “voluntary returns” in partnership with the Syrian authorities, which had allowed the repatriation of 87,000 people up until 2019, according to the minister of displaced persons.

Regarding the selection of candidates for return, Charafeddine explained that Damascus will indicate each month its priority regions.

“The Lebanese authorities have information on the places of origin of Syrians living here. Each time Damascus tells us the destination, we will contact the refugees from the selected areas to propose a return date,” he explained.

He also assured that Syria will provide reception centers for those who return, “with all the necessary infrastructure to lead a decent life.”

Making sure they stay safe in Lebanon

Faced with this project that obviously brings with it uncertain consequences for the refugees, UNHCR highlights that it is not currently part of any form of return planning.

“Our position has remained unchanged since the announcement of this plan. We continue to call for voluntary and safe return. We are in contact with the Lebanese authorities to safeguard the interests of the refugees,” said Dalal Harb, UNHCR communications officer.

“Voluntary return in safety and dignity is a fundamental right for every refugee. While most Syrian refugees hope to return to Syria, their decision-making is based on weighing a variety of factors. Refugees tell UNHCR that they remain concerned about a combination of factors including: safety and security; housing; access to essential services and livelihoods. It is important that refugees are able to make an informed decision,” the UNHCR spokesperson continued.

“Lebanon hosts the largest number of refugees per capita in the world and has assumed a great responsibility at the international level. The current economic crisis has affected the whole society and pushed the most vulnerable to the brink, whether they are Lebanese or refugees. UNHCR calls on the international community to continue to support the host communities in Lebanon and all those in need, whether Lebanese or Syrian,” she added.

Despite the reluctance of UNHCR, which believes that the factors conducive to return have still not been met, Baabda persists in pursuing a returns program, while rejecting any connection that it is developing a deportation process in disguise.

“Deportations are reserved for those who are in trouble with the law. In the framework of the plan we are proposing, it is a return to the country,” a source close to the presidency explained to L’Orient-Le Jour.

When asked about the security risks that some opponents of the regime could face, Charafeddine said that “these are rumors spread by the media.”

“What can they fear in the presence of the amnesty law?” he asked, referring to a decree issued by Syria’s President Bashar al-Assad in April offering amnesty to members of the political opposition who had committed “terrorist crimes” that did not involve killing someone.

This clearly contradicts the reluctance expressed by the refugees themselves to UNHCR and some past experiences: in 2021, a report by Amnesty International had denounced cases of torture, rape or forced disappearance of Syrians who returned home after taking refuge abroad.

As for those identified by the Lebanese authorities as political refugees, Charafeddine explains that they have two options. “Political refugees can choose to return to Syria and take advantage of the amnesty, or they can turn to UNHCR to seek refuge in a third country,” the minister said.

“UNHCR has accepted 9,000 asylum applications from political refugees. Only 5,000 of them have already left. We ask for the acceleration of this process,” Charafeddine said.

Although he insists on his project, which he considers a “humanitarian duty,” Charafeddine admits that he has slowed down in recent weeks because of caretaker Prime Minister Najib Mikati’s “lack of interest” in the issue.

Mikati had threatened last June to take “a decision that is not desirable for Western countries, namely the expulsion of Syrians from Lebanon,” during the launching ceremony of the “Lebanon Crisis Response Plan 2022-2023,” supported by the United Nations. The plan aims to provide humanitarian assistance to 1.5 million Lebanese, the same number of Syrian refugees and over 200,000 Palestinian refugees. Lebanon, meanwhile, has requested $3.2 billion to deal with the ongoing impact of the Syrian crisis.

“We have slowed down the pace, after several attempts to get in touch with Najib Mikati to start the repatriation process. I requested a meeting with the prime minister, but he did not respond to my request. At one point, he told me that I was doing a good job but that he thought it was better if I limited my statements on the subject,” the minister said.

L’Orient-Le Jour contacted the prime minister’s office for comment, but at the time of publication had not yet received any reply.

With almost three months to go before the end of Michel Aoun’s term as Lebanon’s president, the issue of the return of Syrian refugees is back in the spotlight. Launched last July, a plan to repatriate 15,000 Syrians every month is once again being considered by Baabda, despite criticism from the UN High Commissioner for Refugees, which had assured that it was not involved in any...

Thrift shops enable Lebanese to remain on top of trends, despite crisis

Death or prison? Families of shipwreck victims imagine the worst