Who are Ashrafieh’s 'Soldiers of God'? 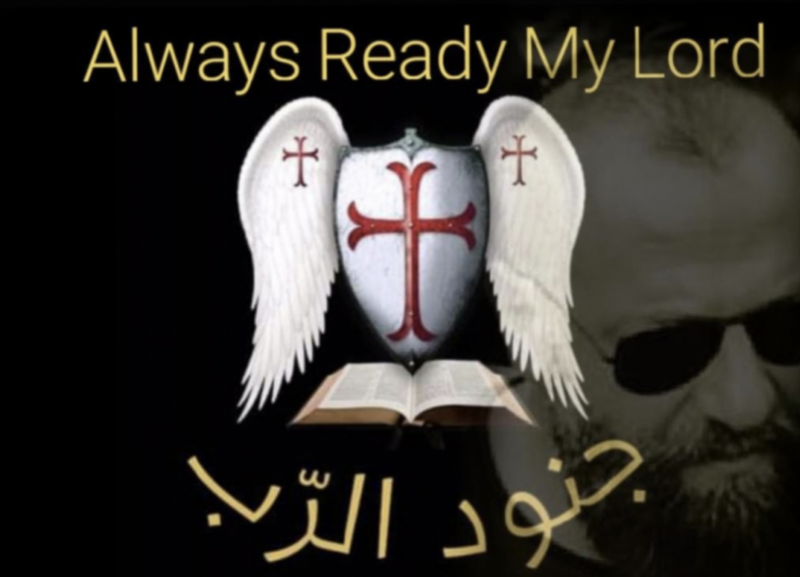 They are muscular, tattooed, bearded, and often dressed in black. They are stationed either in front of the SGBL headquarters in Sin al-Fil or the Sayde agency branch in Achrafieh. Often armed, these shabab (young men) keep a close eye on the comings and goings.

They call themselves the “Jnoud al-Rab” (Soldiers of God) and lead their own political religious fight, guided “by the word of Christ.”

On June 24, this Christian group showed up in Sassine Square, Ashrafieh, in a bid to mark their territory by destroying a billboard of flowers with the LGBTQ+ rainbow flag, which was set up by Beirut Pride for the Pride month celebrations, with the hashtag #LoveAlwaysBlooms.

In a video posted in that same afternoon, the so-called “Soldiers of God” made threats against the community, accusing them of “satanic” intentions: “We do not accept the flag of homosexuals in our neighborhoods” and “families must be careful with their children, they (LGBTQ+) kidnap them,” said Sabeh Haddad, a tall, dark-haired man with colored eyes.

The man shouting beside him was Joseph, known as “Zouzou” Mansour, the leader of this movement, described by their detractors as the Christian version of the Islamic State (ISIS).

Arriving on the scene of the incident on June 24, a few hours before things got out of hand, Hadi Damien, the creator and organizer of Beirut Pride, spoke with bikers claiming to be from “Junud al-Rab.”

“As I understood it, the rainbow flag was for them a satanic symbol, and that homosexuality was against God. They choose what they want from the Old Testament to interpret it in their own way,” Damien said.

“They talked about child trafficking and contradicted themselves often. They are precarious, disillusioned, and manipulated people,” he lamented.

Although she expected the billboard to provoke violent reactions, Karine Karam, a store owner on the street where the incident took place, was still shocked by what happened.

“That’s unfortunately the mentality here. When the bearded men trashed the flowers, the grocer next to my store said, ‘Kharjon’ (They deserve it, in reference to LGBTQ+ people),” she told L’Orient-Le Jour.

The Junud al-Rab come from working-class backgrounds and are hard-core believers. According to various people who have been in contact with them, there are hundreds even thousands of them, and claim to be ready to jump into action if something goes against their convictions.

Their coat of arms is displayed on their social networks, their cars or mopeds and their black T-shirts: a white and red crossed shield, the wings of Saint Michael and the Bible.

On their Facebook profile, the publications all look the same, mostly related to the religious universe. Photos of Jesus or the Virgin Mary and words from the Gospel. Their interpretations are usually through a dogmatic point of view.

For them the coronavirus, the political crisis, Lebanon’s bankruptcy, the power outages and bread shortages are a divine punishment.

They are against live-in partnership and abortion. For them, civil marriage is a heresy that would pave the way for marriage between two people of the same sex.

The “Soldiers of God” swear by the defense of Christian lands in the face of the “Islamist peril,” by targeting Palestinian and Syrian refugees. In particular, they defend the murderer Tarek Yatim, convicted of the murder of Georges Rif, stabbed to death on July 16, 2015, in a dead-end alley in Gemmayze, for a right of way.

According to local residents, but also according to several sources within the bank who requested anonymity, these men are part of the security group of Antoun Sehnaoui, the owner of SGBL bank, whose photo is regularly published on their social networks.

Asma Andraos, in charge of Sehnaoui’s media office, who financed her campaign in the May legislative elections in Beirut I, denied these claims.

In a country where politics and religion are constantly intertwined, some of these religious fanatics are said to be sympathizers of the Lebanese Forces, whose logo they share, along with photos of LF leader Samir Geagea, on social networks.

In a Facebook post on June 23, Sabeh Haddad (one of the men who appeared in the video of the incident) virulently attacked the 13 protest MPs.

“These people have a satanic agenda; they will enact satanic laws. They will hit the Christian community, and at its head the LF because the party remains the most powerful nerve of the community,” he wrote.

L’Orient-Le Jour reached LF spokesman Charles Jabbour who said he had never heard of them, and that they had no connection with the party “whatsoever.”

“We do not share any religious slogans,” he said.

L’Orient-Le Jour contacted Joseph Mansour, the leader of Junud al-Rab, but he declined to comment.

In an interview with Radio Liban Libre on Monday, journalist Tony Nassar asked Mansour several times, “Who are you?”

“We are the children of Jesus, and we only follow the word of the Gospel,” he replied.

“Your group has come to shout, threaten and break everything,” the journalist retorted.

Mansour asked, “Doesn’t that flag of Satan bother you?”

“It’s the flag of homosexuals, as it is indicated on Google,” Nassar commented.

“I’m talking to you about the Gospel and you’re talking to me about Google?” Mansour yelled before the interview was cut off.

This article was originally published in French on L'Orient-Le Jour. Translated by Sahar Ghoussoub.

They are muscular, tattooed, bearded, and often dressed in black. They are stationed either in front of the SGBL headquarters in Sin al-Fil or the Sayde agency branch in Achrafieh. Often armed, these shabab (young men) keep a close eye on the comings and goings.They call themselves the “Jnoud al-Rab” (Soldiers of God) and lead their own political religious fight, guided “by the word of...