Since its 'second independence' in 2005, the land of the cedars witnessed 7.5 years of institutional vacuum 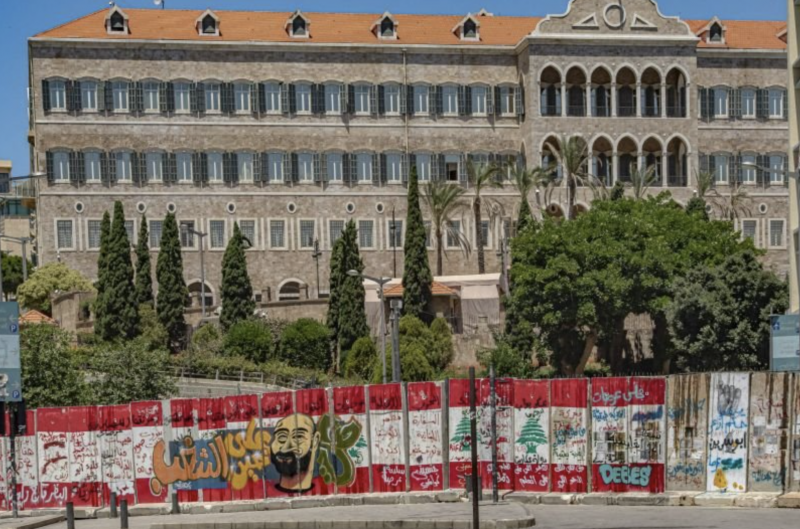 The Grand Serail, where the heads of government sit, in downtown Beirut. (Credit: Nabil Ismaïl)

The clock is ticking for Najib Mikati. Although he is not subject to a constitutional deadline to form his team, the prime minister-designate must accomplish his mission before President Michel Aoun’s mandate expires on Oct. 31.

This is not an easy feat. Since the end of the Syrian tutelage over Lebanon and the withdrawal of the Syria regime’s troops on April 26, 2005, the formation of a government and its entry into service (after the vote of confidence in Parliament) takes an average of 111 days, according to calculations by L’Orient-Le Jour.

The Tripolitan billionaire could therefore have difficulty forming a cabinet, especially in the face of some political actors’ intransigence.

The stakes are high: the presidential election, scheduled to begin at the end of August, two months before Aoun’s term in office expires, may not take place.

In the event of a presidential vacuum, the president’s prerogatives would constitutionally fall to the cabinet

This situation once again highlights one of the main causes of the Lebanese crisis: the impossibility of governance due to a practice that has continued to drift since the Taif Agreement and that requires an accord between all parties.

This is a look back at all the times the logic of compromise or vacuum had the upper hand.

The Taif Agreement that ended the 1975 to 1990 Civil War granted Sunnis (the prime minister) some of the preeminent prerogatives and powers formerly held by Christians, represented by the president of the republic, and enshrined Syria’s political and military presence in Lebanon.

During this period, the various governments, enforced by Damascus, were formed in just a few days. However, after the Syrian troops’ withdrawal of Syrian in the wake of the “second independence” of March 14, 2005 (following the assassination of former Prime Minister Rafic Hariri a month earlier), Lebanon witnessed 2,825 days of institutional vacuum, at the level of the government (1,722 days), and the presidency (1,103 days).

This is equivalent to 45 percent of the 17-year period during which 10 governments, led by five different prime ministers, were in office. On average, 111 days elapsed between the appointment of a premier and the vote of confidence, with wide variations from one case to another.

The Doha agreement and the logic of compromise

From 2008 onwards, the vacuum periods seem to drag longer.

Two years earlier, against the backdrop of a political disagreement over the creation of an international tribunal to investigate the assassination of Rafic Hariri, Hezbollah and the Amal movement, which monopolize Shiite political representation, withdrew their ministers from the government.

The two parties then challenged the legitimacy of the cabinet, accusing then Prime Minister Fouad Siniora of undermining the political participation of their community.

The government then sought to dismantle the parallel telecommunications network used by Hezbollah, prompting the Shiite party to seize control of parts of Beirut and the Chouf area on May 8, 2008 — an escalation that raised the specter of a new civil war.

The worst was finally averted when the stakeholders reached a political compromise on May 21 of the same year in the Qatari capital of Doha.

The Doha agreement, based on a “no winner, no loser” principle, enshrined a consociational formula: national unity governments, election of a unanimous president and the right of veto for all confessional components.

“Since then, sects are no longer beliefs held by citizens, but rather components monopolized politically by zaims (sectarian leaders),” Tarek Mitri, a former minister, said.

“Since the resignation of the Shiite ministers in the Siniora government in 2006, Lebanon is no longer a parliamentary democracy, but has become a consociational system, in other words, a “vetocracy,” he added.

As a result, since the Doha agreement, in order to form a government, a prime minister must deal with many stakeholders, whose interests are often divergent, even incompatible.

For instance, between the resignation of Hassan Diab’s government and the formation of the Mikati’s third cabinet, 406 days passed and two prime ministers-designate recused themselves.

Both Mustafa Adib and Saad Hariri, in trying to form a government of national unity, had to deal with several political stakeholders whose views were difficult to reconcile and who imposed often impossible conditions.

For example, Hezbollah and Amal’s attachment to the finance portfolio and the Free Patriotic Movement’s desire to dominate Christian representation in the government made the task of the two prime ministers-designate extremely strenuous.

Meanwhile other parties, such as Hariri’s Future Movement, Samir Geagea’s Lebanese Forces and Walid Joumblatt’s Progressive Socialist Party, refused to participate in a government yielding to the FPM and the two Shiite parties’ conditions.

But the record for the longest-serving prime minister is held by Tammam Salam, whose cabinet took office 348 days after his appointment in April 2013.

Salam had to deal with the intransigence of the various political blocs as then President Michel Sleiman’s term in office came to an end, while some Lebanese actors, led by Hezbollah, became embroiled in the Syrian war.

In the end, the birth of the government was facilitated by the establishment of a modus vivendi between the Future Movement and Hezbollah, and Lebanon's “disassociation” policy from the Syrian conflict, provided for in the so-called Baabda Declaration.

Then comes Hariri’s third government, which entered into service 266 days after his appointment.

Formed after the 2018 legislative elections (in which the Hezbollah camp emerged with a majority) and while the presidential compromise that allowed Hariri to ascend to the premiership and Aoun to the presidency began to falter, this cabinet was preceded by long negotiations and a real war of quotas.

Today, however, the country, which is sinking into an unprecedented financial and social crisis, cannot afford another period of prolonged institutional vacuum.

“A caretaker government has limited room for maneuver, as determined by the Council of State. It must meet the constitutional deadlines, but it cannot, for example, make the state incur significant additional expenses,” Ziyad Baroud, a legal expert and former interior minister, told L’Orient-Le Jour.

But almost three years into the crisis, Lebanon urgently needs a recovery plan, and therefore to finalize the negotiations begun with the International Monetary Fund.

But how do we get out of “vetocracy” in order to carry out the required reforms? For Baroud, the constitution must impose deadlines on the president to hold binding parliamentary consultations and to appoint a prime minister.

The prime minister should also be subject to a constitutional deadline to form his government.

“Without a deadline, the constitution almost encourages the blocking and delaying of constitutional junctures. A constitutional amendment would allow us to get out, at least partially, of these political practices,” Baroud explained.

As an example, President Aoun began his first binding consultations only two days after his accession to Baabda, but it took 51 days after Hariri’s resignation in 2019 for Hassan Diab to be appointed prime minister.

In the eyes of many observers and politicians, Aoun wanted to form a government before appointing a prime minister.

On average, since the Syrian withdrawal from Lebanon, it has taken Lebanon’s presidents 20 days to begin binding parliamentary consultations.

In early 2021, when Hariri failed to deliver a government months after his appointment, the FPM proposed amending the constitution by imposing deadlines for the appointment of a prime minister and the formation of a cabinet.

But for Mitri, imposing constitutional deadlines is only a good idea in theory.

“First, because Lebanese politicians don’t care about the constitution. Secondly, because these deadlines can be turned into a tool for party politics,” Mitri said.

He raised concerns that the president would, for example, make it impossible for a prime minister he doesn’t like to form a cabinet on time, which would necessitate the appointment of another head of government.

Thus, for Mitri, the solution lies in the political system.

“The Taif Agreement, which has not been fully implemented, provides for the creation of a Senate to reassure the confessional groups. This provision would break the deadlock of national unity governments difficult to form and would allow political and democratic life to resume its normal course, rather than having a government that mirrors Parliament,” he said.

The clock is ticking for Najib Mikati. Although he is not subject to a constitutional deadline to form his team, the prime minister-designate must accomplish his mission before President Michel Aoun’s mandate expires on Oct. 31.This is not an easy feat. Since the end of the Syrian tutelage over Lebanon and the withdrawal of the Syria regime’s troops on April 26, 2005, the formation of a...