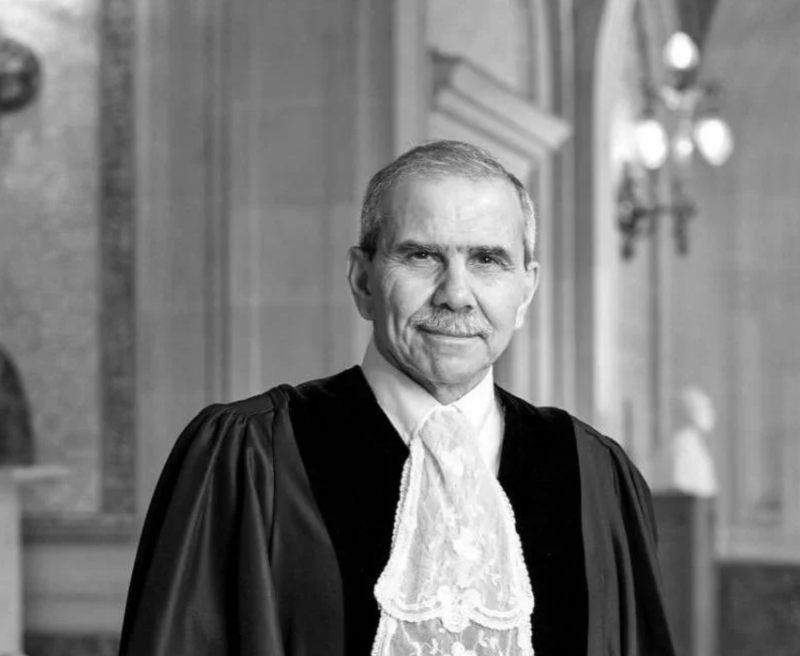 He does not live in Lebanon and has never officially said that he was a candidate for the prime minister post.

However, at every parliamentary consultation since 2019, his name comes back to the forefront of the Lebanese political scene.

Nawaf Salam sometimes looks like a mirage, like a distant hope, to which both the groups of March 14 and Oct. 17 were able to cling, but without it ever coming to fruition.

After much hesitation, he announced he would not enter the fray for the legislative elections that were held in May.

“He is the man of the moment,” a veteran politician told L’Orient-Le Jour.

The “man of the moment?” Not for everyone.

The former diplomat was not a unanimous option for all the MPs, such as the Lebanese Forces, the independent MPs, and the 13 protest movement MPs, three of whom only voted for him.

Accused by some MPs of belonging to the camp of former Prime Minister Fouad Siniora — a controversial figure in the eyes of many reformists with whom Salam refused to ally himself during the legislative elections of 2022.

He was also shunned by the LF who claimed they did not know his political program. He was finally punished by “rumors,” but also for not having honored the practices of “public relations” to which any aspiring politician in Lebanon must comply.

“Samir Geagea has never digested the fact that [Salam] did not visit him to thank him for having appointed him the first time (in 2019), while he easily meets with Fouad Siniora or Walid Jumblatt,” a politician told L’Orient-Le Jour on condition of anonymity.

“As for his program, you only have to read the tens of thousands of pages he has written about Lebanon and the reforms he advocates to get to the bottom of his thinking and his program,” a source close to Salam said.

The ICJ judge is indeed far from being a complete stranger. He has extensive international experience, but it is not his career aspirations that have guided his academic and professional path.

According to several sources who spoke to L’Orient-Le Jour , Salam is driven by his love for the country and for his home city Beirut and by a constant desire to see the phoenix that Lebanon is destined to rise from its ashes.

“He is a bookworm, not someone who follows the stock market,” Progressive Socialist Party leader Walid Joumblatt, a long-time friend of Salam, said to L’Orient-Le Jour.

“He has nothing in common with the political dinosaurs and the business dealings in which they are involved,” he added.

Salam could not be reached when contacted by L’Orient-Le Jour yesterday.

Although he comes from a family of notables — his grandfather, Salim Salam, was a member of the Ottoman Parliament in 1912, his uncle, Saeb Salam, considered one of the fathers of the country’s independence, held the post of prime minister four times between 1952 and 1973 and his cousin, Tammam Salam, was prime minister from 2014 to 2016.

Nawaf Salam was drawn to the left-wing during his university years. These years he spent them abroad earning a series of doctorates in political science, history and social sciences in Paris, before pursuing a law degree at Harvard University in the United States.Like students of his generation, he was actively involved in the pro-Palestinian struggle.

This is a cause that he would continue to defend, along with the sovereignty of Lebanon, during his role in the United Nations.

While he remains a strong advocate for Palestinian rights and has a tendency for social justice and critical thinking from his leftist affiliation, Salam has gained the skill of being pragmatic through his international experiences.

“His vision is no longer one of old-style revolutions and struggles. He knows well the limits of the left’s ambitions,” Ziad Majed, an academic, researcher and close associate of Salam, told L’Orient-Le Jour.

Since then, he has supported a reformist vision that he has expressed in several books and essays on the reconstruction of the Lebanese state, the reform of the electoral code and the independence of the judiciary. Through this, he developed a centrist approach.

His intellectual contribution but also his involvement in multiple civic actions are mainly motivated by his desire to “confront a corrupt system dominated by confessional considerations and Syrian hegemony in the 1990s,” Majed added.

Although imbued with a culture of resistance against Israel, understood in its national sense, Salam nonetheless defended the need to rebuild the sovereignty of the Lebanese state throughout the country.

“The issue of Hezbollah’s weapons can, according to him, only be solved within the framework of a defense strategy,” Majed said.

In addition to serving as Lebanon’s permanent representative to the UN in New York (2007 to 2017), Salam served as president of the Security Council in May 2010 and September 2011 when Lebanon was elected as a non-permanent member for a two-year term.

In Nov. 2017, he was elected by a majority vote at the UN as a judge at the ICJ in The Hague for a 10-year term, an extremely prestigious position that only two Lebanese people have held: himself and renowned jurist Fouad Ammoun.

His 10 years at the UN earned him unconditional respect in diplomatic circles “even among ambassadors who did not agree with him,” recalled journalist Giselle Khoury, who knew him as the best friend of her husband, Samir Kassir, a writer and journalist who was killed in a car bomb in June 2005.

It was Salam who was the architect of the policy of “disassociation” from Syria in 2012, anxious to protect Lebanon from the war that was tearing the neighboring country apart.

His tenure at the international organization was distinguished by multiple interventions in favor of UN Resolution No. 1701, which has since helped stabilize the region and prevented the resuming of hostilities.

“He has always had the right political reaction in the great moments that have marked the history of Lebanon,” Khoury told L’Orient-Le Jour.

It is with the same fervor that he worked to put an end to impunity by establishing the Special Tribunal for Lebanon (STL) in the case of the assassination of former Prime Minister Rafic Hariri, a move that was probably behind the labeling of Salam as an enemy by Hezbollah.

Hezbollah had concerns about Salam’s relations with Siniora, the architect of the STL.

It is to Siniora that Salam owes his appointment as ambassador to the UN in 2007.

His long-standing relationship with the former head of government “with whom he maintains relations as with other Lebanese political figures,” according Majed, proved to be detrimental to him in the parliamentary consultations.

He is not a zaim (sectarian leader) nor a staunch revolutionary.

When finally, Salam, who is judged by some to be a “too pro-March 14” figure, and by others “too pro-Palestinian,” seemed ready to take on the premiership role without bending to the practices of Lebanese-style compromise. However, he was immediately brushed asidetaken out of the game for a post in which he would be compelled to perpetuate the influence sharing at the executive level.

This article was originally published in French with L'Orient-Le Jour. Translation by Sahar Ghoussoub.

He does not live in Lebanon and has never officially said that he was a candidate for the prime minister post.However, at every parliamentary consultation since 2019, his name comes back to the forefront of the Lebanese political scene.Nawaf Salam sometimes looks like a mirage, like a distant hope, to which both the groups of March 14 and Oct. 17 were able to cling, but without it ever coming to...