Najib Mikati vs. Nawaf Salam: Suspense is ramping up 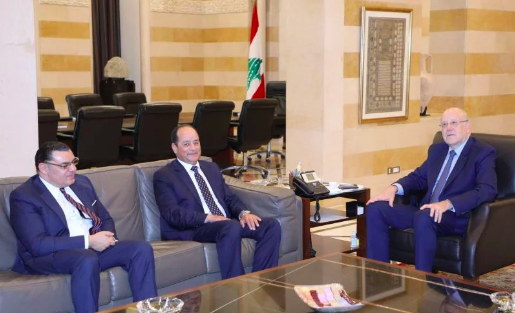 It is a two-player game. The hearts are swinging between two names: that of current caretaker Prime Minister Najib Mikati and that of Nawaf Salam, former ambassador to the United Nations and judge at the International Court of Justice.

Until last night, the decision was not final for a large number of key players, who affirmed that their position will be fine-tuned according to those of their respective allies.

As in a poker game in which no one wants to reveal their cards first, several traditional and opposition parties that were more inclined to name Salam were waiting for the landscape to sort itself out before announcing their choices. This is also the case for the Free Patriotic Movement, which is still stoking suspense over its final choice.

The announcement made in the evening by the Progressive Socialist Party, which has finally set the tone and decided to name Nawaf Salam, could be a game-changer insofar as it could set off a chain reaction and bring in its wake all those wavering over their choices.

Despite the boost given by the PSP, the Lebanese Forces, although in continuous consultation with Joumblatt’s camp, announced today that it would not endorse any candidate.

Taking the lead, the PSP finally made the decision and ended the mystery by officially declaring itself in favor of Nawaf Salam, a friend of Walid Joumblatt. The latter initially had a tendency toward Mikati, not out of conviction as much on pragmatic grounds, as he was not willing to go against the wishes of his friend, Parliament Speaker Nabih Berri.

Jumblatt’s party decision came after the Kataeb party (with four MPs) announced its willingness to support Salam, who has been its favorite candidate from the beginning.

The Free Patriotic Movement is blowing hot and cold. Speaking to local LBCI TV channel 10 days ago, its leader, Gebran Bassil, had completely ruled out the possibility of opting for Mikati.

This position was confirmed by sources close to the FPM, which said that the Aounist party is also waiting for the opposition forces and protest movement MPs to agree on a candidate to decide to support him. “Otherwise, we will opt for a blank vote,” Rindala Jabbour, FPM political bureau member, told L'Orient-Le Jour on Monday, thus excluding the Mikati option.

At the same time, Simon Abi Ramia, MP for Jbeil, spoke of another possibility: That of naming the current caretaker prime minister if he meets the preconditions set by Bassil, which include dismissing central bank governor Riad Salameh.

Will Hezbollah, which has been trying to convince its ally to soften its stance towards Mikati, succeed in doing so? “It’s a misunderstanding of Gebran Bassil to take what he says at face value. He won’t do anything that might bother Hezbollah,” said a politician on condition of anonymity. For him, Bassil is only “maneuvering, an art he masters to perfection.”

When it comes to the 13 MPs of the protest movement, it is a stampede. On Monday evening, their meeting was designed to set the tone once and for all and to bring together the disparate viewpoints.

Opinions were divided between those who wanted to name Khaled Ziadeh, director of a center for research and political studies in Beirut, Lebanese ambassador to Egypt and delegate to the League of Arab States, and those in favor of Nawaf Salam.

This is the case of Marc Daou and Najat Aoun of the Taqaddom party, who presented their peers with a fait accompli by issuing during the day a statement supporting the former representative of Lebanon to the UN.

Those who would be in favor of this choice include Waddah Sadek of Khatt Ahmar, and potentially Rami Finge and Yassin Yassin who were already tending towards this option.

During the meeting, the desire to stand united with a single name was evident, the majority had initially decided in favor of Khaled Ziadeh, said an informed source.

The recalcitrant had promised to return with an answer yesterday after consulting their respective parties. In the end, the three MPs insisted on their choice and even managed to bring with them other hesitant MPs, including Rami Finge and Yassin Yassin.

For the MPs for Saida — Abdul Rahman Bizri, Osama Saad and Charbel Masaad — their guiding principle is not to vote for Mikati. This position goes against the wishes of Bahia Hariri, who is working hard to ensure that the Tripolitan billionaire is re-designated, said a political analyst from Saida on condition of anonymity.

It is still unclear, however, what the second option is for these three MPs and whether they will support Salam.

In the camp that claims to be in favor of Mikati’s designation, things are a little clearer: In addition to the Amal-Hezbollah tandem, the Marada movement, some independents who have not yet announced their decision and the independent Sunnis have joined this procession unsurprisingly.

Nine of them have already pledged to designate the current caretaker prime minister during a series of meetings held at the residence of Nabil Badr, MP for Beirut and head of a group close to the Hariri movement.

The game is therefore far from over. There are 24 hours left before the landscape becomes clearer. Unless the consultation in Baabda are postponed, which is an option that remains on the table.

This story has been updated to reflect the Lebanese Forces party's decision not to endorse a candidate.

It is a two-player game. The hearts are swinging between two names: that of current caretaker Prime Minister Najib Mikati and that of Nawaf Salam, former ambassador to the United Nations and judge at the International Court of Justice.Until last night, the decision was not final for a large number of key players, who affirmed that their position will be fine-tuned according to those of their...