The priorities of the Sunni MP from the Chouf include Lebanese women’s right to pass down her nationality and universal health coverage. 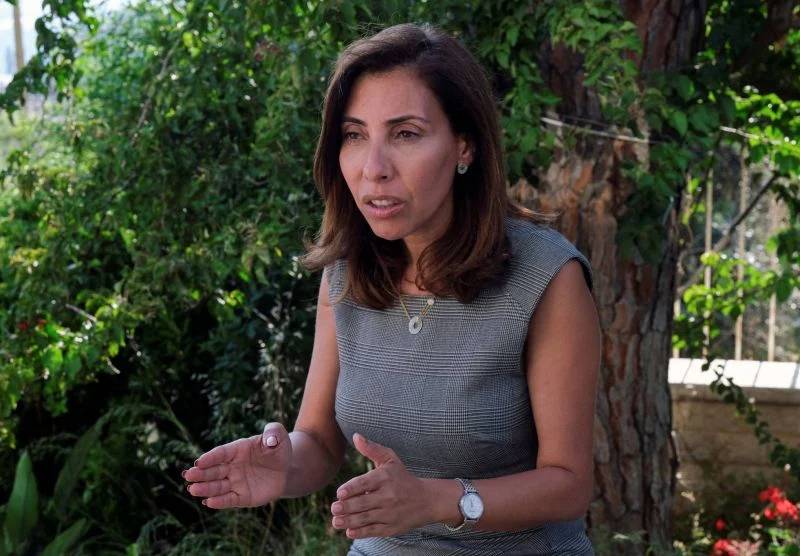 Halimé Kaakour’s project is to bring the population together around universal health coverage. (Reuters/Emilie Madi)

A year ago, she published a study revealing the obstacles facing Lebanese women who wish to run in the parliamentary elections. These obstacles had prevented the committed feminist and professor of law and political science at the Lebanese University of Saida from signing up to run in the 2018 elections.

On May 15, she was elected MP with 6,684 votes. Kaakour, 46, is the first woman from Iqlim al-Kharroub, more precisely from the Sunni village of Baasir, to make her way into the Lebanese Parliament.

To do so, the candidate broke long-established taboos, like the taboo of daring to claim a Parliament membership that is “traditionally reserved for candidates from the largest localities of Iqlim, Shehim and Barja,” as Kaakour put it.

She also broke the taboo of “campaigning in the upper Chouf, traditionally reserved for Druze candidates,” Kaakour said, and that of “defying the patriarchal norms that favor male candidates.”

“This is the first time that the Lebanese Parliament has a woman of this character, independent and transparent, gentle and diplomatic, an excellent negotiator and at the same time who has strong convictions,” said Joelle Abou Farhat, co-founder of Fiftyfifty, an NGO that aims to create gender parity in political life.

In her family home, which is always full, the self-proclaimed “MP of the nation,” tried to catch her breath after her triumph on the “United for Change” list propelled her into a whirlwind of emotions.

The phone didn't stop ringing and messages followed in quick succession, while an army of volunteers were still mobilized.

“I still don’t believe it,” she said.

But already, the euphoria of victory has been overtaken by fierce criticism leveled by clerics of the highest Sunni authority, Dar al-Fatwa, against newly elected Sunni MPs, including Kaakour, on the pretext that they are in favor of civil marriage.

“I came under a lot of pressure during my campaign for being in favor of a secular state and optional civil marriage,” she said.

The rumors spread, according to her, to discredit her, including accusations of antitheism. The MP underscored that she is a believer and “observes Ramadan.”

“In the mosques, sermons were given against me and other candidates of change (from the Oct. 17, 2019 uprising),” she said.

The accusations have “touched” her family, who have united to support her, but the criticism did not discourage Kaakour, a woman with a strong character who is also an athlete and knows how to remain calm under pressure.

“I campaign for all human rights, women’s rights in particular,” she said. “My priority, however, is to have Lebanese women pass down their nationality.”

As for calls for the secularization of personal status laws (currently governed by the religious communities’ laws, which often discriminate against women), she fears “it would be too early to see them come to fruition.”

Politics is in Kaakour’s blood.

This identity has been forged over time thanks to a solid academic background and hard work. After she obtained a university degree in political science with a diploma in international relations and diplomacy, she pursued her master’s degree on the universality of human rights and cultural specificities in France.

She crowned this specialization with a PhD in public law. It was in 2015, during the waste crisis, that Kaakour joined politics.

“I am one of the protesters who believe in the Kellon yaaneh kellon (“All of them means all of them”) slogan, a slogan that, for me, aims to dismantle the sectarian political system and fight against the policy of the axes [of March 8 and March 14],” she said.

Over time and through crises, she forged strong ties with the forces of change, to the point of becoming a leading, heard and respected figure.

“She is persistent, a fierce human rights advocate and knows how to convince people with her clear ideas and structured thinking. This makes her a role model for young people,” said Nada Anid, the founder of the Madanyat NGO, which works for women’s participation in politics.

The newly elected MP, who became a member of the independent coalition Tahalof Watani’s political bureau in 2018, actively participated in the popular uprising of 2019, an outpouring of anger against the ruling elite, accused of being responsible for the economic and financial crisis.

She was then a member of the political group called LiHaqqi, which stemmed from grassroots activist communities in Chouf and Aley, which at the time did not want to become a political party, she said. Because “no political action can be done outside political parties,” she said, she founded in 2021 with a dozen activists the social-democratic political party called Lana (@LNALebanon).

Kaakour describes Lana as “A non-communist party that aims to grant individual freedoms and socio-political rights for all which are fundamental in the fight against structural inequalities and poverty, trigger sustainable development and protect the environment.”

Certainly, “This requires universal health coverage and free education,” Kaakour said. It is then, she added, that “a people gathered around vital societal projects will no longer need to follow Hezbollah (and its illegal armament) or the Lebanese Forces (who position themselves as a bulwark against this armament).”

No to re-elect Berri

Her commitments also include the independence of the judiciary, the fight against economic monopolies and the introduction of a progressive taxation system.

“It is an indivisible whole to which we must add the amendment of the electoral, legislative and municipal laws,” she said.

The activist’s discourse is attractive, said Zeina Helou, a long-time friend and co-founder of the Lana party.

“Thanks to her, the Lana party attracts a large number of young people who are against political sectarianism,” said Helou. “Not only is this university professor particularly appreciated by her students, but she has also built excellent relations with the youth.”

Ahead of her first parliamentary session, Kaakour is preparing her talking points with the other MPs of the new forces of change. One thing is certain, she said she intends “to free [herself] from any policy of compromise and the sharing of the pie.”

“I will not vote for Nabih Berri for the post of Parliament speaker,” she said.

She said that she isn’t a candidate for the post of prime minister, as she believes in the importance of keeping different governmental levels independent from each other, adding, “I am a member of Parliament and against combining the legislative and executive roles.”

This story was originally published in French in L'Orient-Le Jour

A year ago, she published a study revealing the obstacles facing Lebanese women who wish to run in the parliamentary elections. These obstacles had prevented the committed feminist and professor of law and political science at the Lebanese University of Saida from signing up to run in the 2018 elections.On May 15, she was elected MP with 6,684 votes. Kaakour, 46, is the first woman from Iqlim...