He has participated in nearly every protest since the 1990s. Much to his surprise, he was elected in the May 15 vote and made it to Parliament. He is not afraid to disturb the ruling class 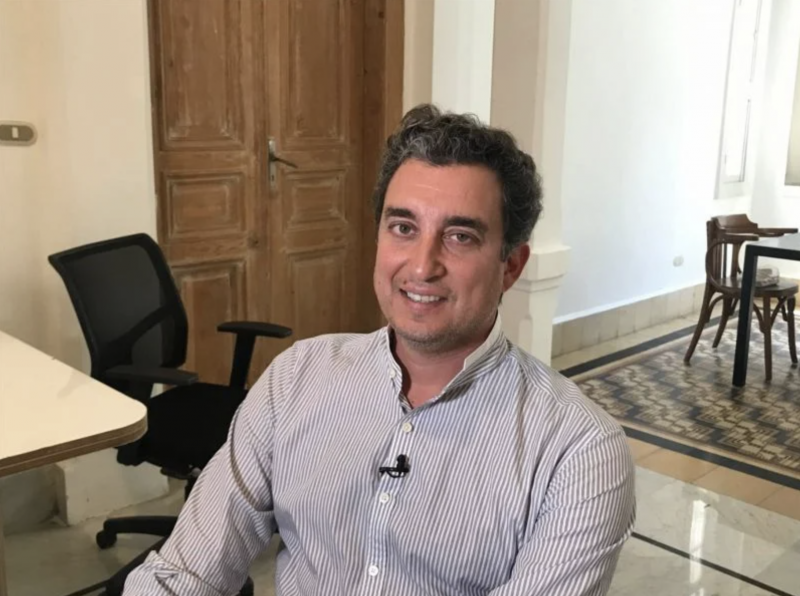 Mark Daou, MP for Aley who won the seat held for over 30 years by former MP Talal Arslan, in his office in Gemmayzeh. (Credit: Zeina Antonios/L'Orient-Le Jour)

A candidate for one of the Druze seats in Aley, he surprised everyone by dethroning Talal Arslan, one of the leading figures in the establishment decried by the Oct. 17, 2019, popular uprising.

Mark Daou, who co-founded the Taqaddom party in November 2019 with several civil society activists, was elected by a landslide of 11,656 votes, the highest tally in the district — a result that he said did not see coming.

Daou, who unsuccessfully ran in the 2018 elections, is ready to fully assume his new role.

“I knew that our list would have good results, but coming first in Aley was a surprise,” he said.

A graduate at the American University of Beirut and the London School of Economics and Political Sociology, Daou, a publicist and university professor, is convinced that reform has already begun.

“Public opinion is in favor of a radical change in the country. It is time to turn the page and start a new political phase, far from the logic of civil war and the sharing of the cake,” he told L’Orient-Le Jour.

Dressed casually and with messy hair, the 43-year-old bachelor, who has been active in political circles since the 1990s, is preparing to enter Parliament head-on.

Surrounded by a team of young people from all communities, he is working out the details in his office in a traditional building in Beirut’s Gemmayzeh area.

“We meet every morning with the team members. Then we organize meetings with voters and interviews with the press. In the evening, I spend a good deal of time answering the many calls and messages I receive,” Daou said.

He owes his victory to the thawra (revolution), “which won the battle,” in his words.

“Oct. 17, 2019, has changed the game. Before, we were waging war on the system to obtain reforms. Today, we just want to end the system,” he added.

Attracted to political activism since his university days, Daou was already fully committed to the battle for independence launched in the early 2000s alongside journalist Samir Kassir, who was assassinated in Beirut in June 2005, at the height of the Cedar Revolution.

“In 2004, Samir was working to set up a secular party (the Democratic Left Movement). Meetings were held at our home,” said Gisele Khoury, a journalist and Kassir’s widow.

“One day, Samir introduced me to one of his comrades in [the] struggle and told me that I was going to witness the birth of a future political leader. The young man in question was called Mark Daou,” added Khoury, who shared this anecdote on social networks, a few hours after the announcement of results.

For Laury Haytayan, a researcher and general coordinator of the Taqaddom party, Daou is the right man for the job, and “able to communicate with people, while keeping an eye on the prize.”

“I met him in 2013 in Riad al-Solh, Beirut, during the protests against the extension of the Parliament’s mandate. We continued to advocate together in 2014 and then in 2015, during the waste crisis. In 2018, we ran for the legislative election each on our own,” recalled Haytayan.

She praised the man who became a friend.

“Despite his busy schedule, he didn’t hesitate to take the time to call me with advice for my election campaign,” she told L’Orient-Le Jour.

“Mark has worked hard to get to this point, he was not parachuted into office. He is close to the people and knows their problems well. I think he is where he should be now,” she added.

While he is happy to have been elected MP is Aley, Daou is well aware of the security risks he faces.

In January 2021, he found a Kalashnikov bullet on the windshield of his car, a thinly veiled death threat.

At the time, he told L’Orient-Le Jour that he had been the subject of all sorts of threats, related to his commitment during the popular uprising and his multiple criticisms of the ruling parties, including Hezbollah.

“The militias are ready to resort to murder, but as long as we stick together, there is hope for change. Since the assassination of Lokman Slim (in February 2021 in the south of the country), we know very well who we are dealing with. But it is important to have the courage to face them,” Daou said.

This an increased security risk in view of certain battles that the newly elected MP intends to lead, such as the candidacy of Parliament Speaker Nabih Berri to succeed himself.

“The Constitution does not specify the confession of the Parliament speaker. Any MP can therefore accede to this position,” Daou said.

He added, “A government of national unity is not an option. It is better to form a cabinet of independent technocrats.”

Daou has no illusions about the animosity of the other side.

“The ruling parties will be disturbed by our presence because we do not fit into any religious mold. We are not linked to foreign countries like them. We represent a new system that confronts the ruling class. It is only a matter of time before they lose more privileges,” he concluded.

This was originally published in French by L'Orient-Le Jour.

A candidate for one of the Druze seats in Aley, he surprised everyone by dethroning Talal Arslan, one of the leading figures in the establishment decried by the Oct. 17, 2019, popular uprising.Mark Daou, who co-founded the Taqaddom party in November 2019 with several civil society activists, was elected by a landslide of 11,656 votes, the highest tally in the district — a result that he said...