Will the Armenian vote go off the beaten track?

Lebanese-Armenian voters are torn between their desire for change and their identity. The hope of electing opposition candidates remains high in Beirut I 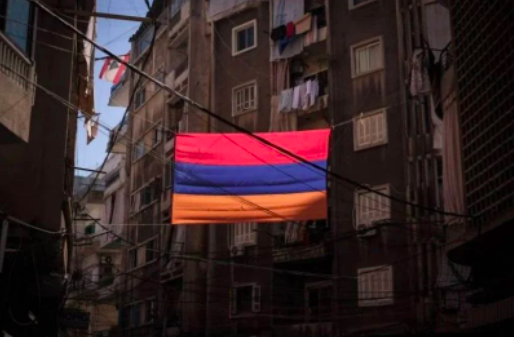 An Armenian flag hangs over a street in Bourj Hammoud, an Armenian neighborhood in Beirut. (Credit: Joao Sousa/L'Orient Today)

Concentrated in Beirut I, Metn and Zahle, nothing is certain for the Lebanese-Armenian voters this year amid acute economic, social, and political crises.

The 2018 polls saw the influential Tashnag party take half of the six seats set aside for Armenians in Parliament, with Hagop Terzian and Alexandre Matossian elected in Beirut I, and Hagop Pakradounian, Tashnag's secretary general, winning the seat reserved for Armenians in Metn.

The other two seats in Beirut I are held by MPs Paula Yacoubian, the only one considered to represent civil society groups, and Jean Talouzian.

The seat in Zahle went to Jean Demerdjian, a lesser-known candidate, who made his way to Parliament with barely 77 votes, much less than the Tashnag candidate, Georges Bouchikian, Lebanon’s current labor minister — a result of the shortcomings of the electoral voting system in the country.

The Tashnag (also known as the Armenian Revolutionary Federation) is today the most influential Armenian party on the Lebanese scene, with an extensive political, social, economic and educational infrastructure.

Founded in the late 19th century, the party established itself in Lebanon in the 1920s after the arrival en masse of Armenians fleeing the genocide of 1915.

In 2005, the Tashnag joined the pro-Syrian-Iranian camp of March 8, consolidating its alliances with Hezbollah, the Free Patriotic Movement and the Murr family, especially in Metn.

All the incumbent Armenian MPs are running again in the 2022 election, except for Demerdjian, and this year they will face many independent candidates or candidates claiming to represent the Oct. 17, 2019, popular uprising.

After Yacoubian’s victory in the 2018 elections, will Armenian voters allow other candidates close to the protest movement to make a breakthrough in the May 15 polls?

Beirut I is home to the most independent Lebanese-Armenian candidates for this election.

In Zahle, Armenian candidate Leena Manouk Koukjian, from the protest groups, is running on the “Change” list.

The “Independent Sovereignists” list, supported by Michel Daher — an independent MP who left the Aounist parliamentary bloc — and opposition groups close to the protest movement, supports Martine Demerdjian, an independent.

The “Zahle se Revolts” list, made up of opposition figures, supports the candidacy of Armen Asfahani, a candidate from the thawra (revolution) groups.

In Metn, of the six lists participating in the race, only the “Sovereigntists of the Metn” list, which advocates federalism, has a candidate who is not sponsored by a political party, Shant Sarafian.

In the face of these multiple candidacies, which pit traditional political parties against newcomers from the protest movement, Georgia Dagher, a researcher at the Policy Initiative, believes that “there is a chance of having independents again in Beirut I.”

“Armenians in the capital who used to vote for the traditional parties and who might change their minds this time are likely to turn most to Paula Yacoubian,” said Dagher, who thinks it is unlikely for other civil society candidates in Beirut to be elected.

“But it is not realistic to expect such a scenario in Metn and Zahle. The strong candidate in Zahle is the one from Tashnag, Georges Bouchikian. He will probably be elected,” he added.

Meanwhile, Dagher believes that the Armenian vote will not really affect the outcome of the election, due to the high abstention rate of Lebanese-Armenian voters.

“Even if a number of Armenians decide to vote for candidates from the opposition groups, their vote will not have much impact, because Lebanese of Armenian origin have the lowest turnout among the population. I think that not all of them feel concerned by the election because there is a politically separate Armenian identity,” she said.

According to figures provided by The Policy Initiative, the majority of Lebanese-Armenian voters cast their ballots for a candidate of Armenian ethnicity in 2018.

In Zahle, 25 percent of Armenian Orthodox voted, and 72 percent of them chose an Armenian candidate.

In Metn, 29 percent of Lebanese of Armenian origin went to the polls and 51 percent of them elected a candidate from their community.

An estimated 99,000 Lebanese-Armenian voters cast their ballots in 2018 in all constituencies.

Parliament reserves six seats for Lebanese of Armenian origin (five for Armenian Orthodox and one seat for Armenian Catholic).

In Bekaa I (Zahle), there is also one seat reserved for Armenian Orthodox.

‘The Tashnag is part of the system’

Paul*, in his forties, is one of those who fervently defend the Armenian cause.

This voter close to Tashnag explained, however, that he is torn between his belonging to the Armenian community and his desire for change, after the events that rocked the country over the past few years.

“In previous elections, I voted for the Lebanese Forces, then for the FPM and Tashnag. This time, I don’t know if I will vote for an independent candidate or someone close to Tashnag,” Paul said.

“Unfortunately, the Tashnag is part of the failed system. What is certain is that I will not vote for the FPM. It has clearly proven that it is not trustworthy,” he added.

Paul believes that most Lebanese-Armenian expatriates are preparing to vote for independents, while those living in Lebanon will probably vote for Tashnag.

“In Metn, they will continue to vote for Tashnag. The Armenian vote will not change much in Beirut. Lebanese of Armenian origin support a cause that is unique to their people. If the Tashnag asks them for something, they will listen to it because they believe that this party acts on behalf of the community,” Paul explained.

When asked by L’Orient-Le Jour about the Armenian vote, Hagop Havatian, head of communications for Tashnag, said he is confident, despite the changes in the local political scene.

“The Armenian voters know who protects their rights and who work for the good of the community. We have confidence in our voters,” he said.

He also defended his party’s electoral alliances that might displease part of his electorate, irritated by the performance of the ruling parties.

“In the 2018 elections, we allied with the FPM and we were part of the same parliamentary group. This year, in Metn, the party’s interest is to ally with Michel Murr, which will not prevent us from joining other political groups in the new Parliament,” Havatian said.

“As for Zahle, it is the electoral coefficient that counts. To be able to win the elections in this district, we have allied ourselves with Hezbollah and the FPM," he explained.

Alliances that Paul said he understands, in light of the history of the Armenian people in the region.

“As a minority, Armenians are obliged to be close to the strongest. In Metn, they have abandoned the FPM and allied themselves with Michel Murr. This way of doing things is rooted in the culture and will never change,” he said.

Armenians in the diaspora, on the other hand, seem to be more divided than ever about the usefulness of their participation in the elections.

In Armenia, where a large number have taken refuge after the Aug. 4, 2020, explosion that destroyed many of their neighborhoods, the elections do not seem to convince many people.

“There will be no polling station in Yerevan because there were not enough registered voters,” Havatian said. “But we have learned that many of them will come to Beirut to vote,” he added.

According to Interior Ministry figures, 2,984 Armenians of all denominations in the diaspora registered to vote remotely this year, representing 1.39 percent of all voters abroad.

Georgia Dagher believes that the majority of voters in the Lebanese-Armenian diaspora “will remain loyal to their political affiliations.”

This is a trend that could be challenged this year by some voters eager for change, like Rafi*, in his thirties, who is preparing to fly to Beirut to take part in the vote.

This young expatriate registered in Metn intends to cast his ballot for the opposition, regardless of the candidates’ ancestry.

“I usually vote for Kataeb. This year I will vote for an alliance between Kataeb and the opposition from Oct. 17,” Rafi said.

The same is true of Jacques*, in his sixties, registered in Metn.

“It is absolutely necessary to vote against the Iranian project in the region, even if the candidate is not of Armenian origin,” he told L’Orient-Le Jour.

“There is a need for change in general within the Armenian community. Many are not satisfied with the renewal of the Tashnag alliance with the FPM in Beirut and Zahle,” Jacques added.

“The only way to counter Iranian influence is to start by bringing down the FPM,” he said. While Jacques is determined to go to the polls on May 15, he revealed that his relatives in the United States will probably not vote abroad.

“Many Lebanese-Armenians have emigrated in recent years. But most of them are not interested in voting, especially in the US. The country is huge and they will have to drive for hours to get to the polling stations, for a ballot that is not worth it in their opinion,” he said.

*Names have been changed

Concentrated in Beirut I, Metn and Zahle, nothing is certain for the Lebanese-Armenian voters this year amid acute economic, social, and political crises.The 2018 polls saw the influential Tashnag party take half of the six seats set aside for Armenians in Parliament, with Hagop Terzian and Alexandre Matossian elected in Beirut I, and Hagop Pakradounian, Tashnag's secretary general, winning the...