In the South III district, Amal and Hezbollah will have difficulty winning all seats

The LF may sanction the protest movement’s list, which was unified after much wrangling, because of its ‘ambivalence’ toward Hezbollah’s weapons. 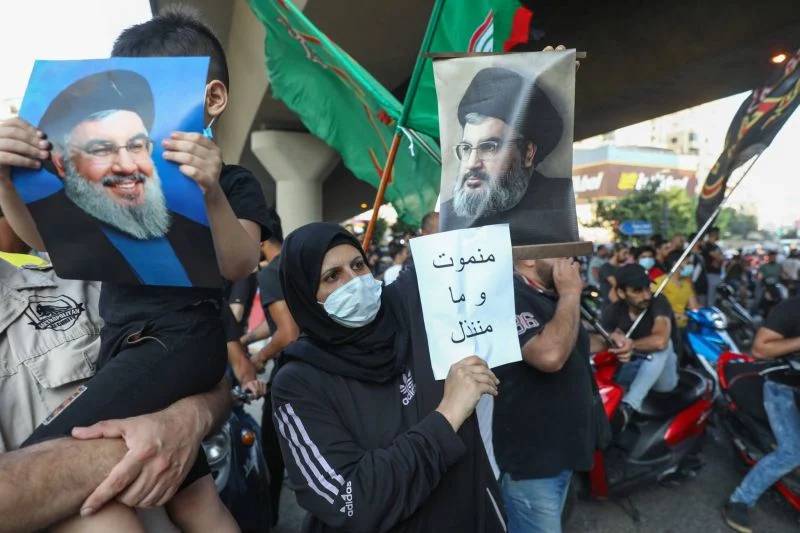 This constituency may best represent the two main issues at stake in the upcoming legislative elections, namely renewal of the old elite and the challenge to Hezbollah and the Amal movement’s sway over the political landscape.

In the South III constituency, which includes the districts of Nabatieh, Bint Jbeil, Marjayoun and Hasbaya, the battle between the new forces and those of the political establishment — which in this constituency means two parties nominally representing the Shiite community — will be direct and severe due to the duality of the existing lists.

The forces emanating from the Oct. 17 protest movement finally managed a masterstroke in unifying their ranks in this constituency, running on the same list despite all their diversity.

This alliance was not formed without a price, since its candidates’ positions on the issue of “the resistance” and Hezbollah’s weapons — an extremely sensitive topic in this area bordering Israel — could not be reconciled.

Thus, for the 497,621 voters called upon to elect the 11 MPs in the constituency (eight Shiites, one Sunni, one Greek Orthodox and one Druze), the choice is no longer systematically between armed Shiite resistance or a sovereign state that has a monopoly on arms; rather, they have to choose between being with or against the old order and traditional forces.

The protest movement’s list will compete against a Hezbollah-Amal-sponsored list, whose influence there is not as absolute as elsewhere, due to the presence of a large Sunni-Druze-Christian electorate in the Marjayoun-Hasbaya area.

The list concocted by Amal and Hezbollah is solid, to say the least. Chaired by incumbent MP and head of Hezbollah’s parliamentary bloc Mohammad Raad, it includes seven other incumbent MPs and figures that are well-known in their respective districts and have been re-elected several times.

Remarkably, the list managed to include two financial magnates, able to drum-up the necessary funds. They are Nasser Jaber — whom Parliament Speaker Nabih Berri substituted for Yassine Jaber (who was the list’s financial backer in 2018) — and former minister of state Marwan Kheireddine, a Druze banker and chairman of the board at Al-Mawarid Bank.

Traditionally backers of Talal Arslan, who is Kheireddine’s brother-in-law, have considered this a secure seat.

The other list is a coalition of the main Oct. 17 protest movements. This broad spectrum which was created after much wrangling, includes a range of tendencies and parties that do not always agree on all issues.

“The goal was to form a list that brings together a broad spectrum of the protest movement groups. It was necessary to make many concessions to achieve this,” said a source who has closely followed up on the list formation.

This list includes the Lebanese Communist Party, which has a significant base in many Shiite localities in the area.

In the 2018 elections, the division of opposition candidates into four different lists made it much easier for Amal-Hezbollah to win: with an electoral threshold of 20,526 votes, the parties received 193,224 votes, thereby taking 11 seats.

The Shiite community’s support for these parties was massive, allowing the entire list to be elected. This can be contrasted with the Christian, Sunni and Druze electorate, which threw its weight behind the list supported by the Free Patriotic Movement, the Future Movement and the Lebanese Democratic Party.

By unifying their ranks this time, the protest movement made every effort to prevent Amal-Hezbollah from obtaining high electoral numbers and to increase their chances to win.

- Amal's declining unpopularity: “The game is likely to be close, particularly since Hezbollah’s voters are frankly not interested in voting for Amal this time,” said an analyst from the area, declined to be named.

In Marjayoun-Hasbaya, where he is running, “Ali Hassan Khalil is less and less appreciated,” said a local resident.

Since several members of the Amal Movement have been implicated in the Beirut Port blast — including Berri protégé Ali Hassan Khalil, against whom an arrest warrant was issued in this regard — not to mention accusations of corruption, this movement will have a hard time winning the same number of votes as in 2018, said an expert who preferred to remain anonymous.

Hence the presence of two bagmen — Nasser Jaber and Marwan Kheireddine — particularly since “a lot of money needs to be spent this year for the movement to save face,” said a resident of Nabatieh.

“Hezbollah will face two serious problems, said Carnegie Middle East Center researcher Mohanad Hage Ali: many people have lost their money in the banks. How to convince them to vote for a list where Marwan Kheireddine is enthroned as if nothing had happened?”.

The other problem, he added, is that Hezbollah, which has an inarguable surplus of votes in this constituency, “will find it difficult to transfer preferential votes to Amal, especially to Ali Hassan Khalil.”

In an attempt to please everyone, the candidates on the list — two of whom are “pro-resistance” — have adopted contradictory positions on Hezbollah’s weapons and anti-Israeli militancy.

- The withdrawal of the Lebanese Forces: There is also the question of who will benefit from the approximately 4,000 pr0-LF votes.

The Christian party tried to hold talks with the protest movement list to negotiate giving its votes to Greek Orthodox candidate Elias Jaradeh. This effort failed after two members of the list categorically refused to accept LF support.

Dating back to the Civil War, the animosity between the LF and some leftist movements was rekindled on the day the Lebanese commemorated the Beirut port explosion anniversary last year. That day, Gemmayzeh neighborhood saw a brawl break out between communist party supporters and Geagea backers, leaving several people injured.

On Saturday, the LF leader finally announced that his party will not participate in the electoral battle in South III, saying, “the agenda of the majority of candidates and lists formed is close to that of Hezbollah.”

“We do not want to support a list that is ashamed of us and our principles,” said an LF official.

“It is an overstatement to say that the list is close to Hezbollah,” commented a figure close to the protest movement.

While one or two candidates espouse views that are close to that of the resistance, this is not the case for the others, some of whom are known for their opposition to Hezbollah influence. This is particularly the case for Ali Mrad and Wissam Ghandour, whose respective fathers, political actors in the area, are fierce opponents of Hezbollah’s line.

The list will not benefit from the votes of the 5,000 Aounists in the constituency, who, in the absence of a FPM candidate, do not seem enthusiastic to take part in the elections.

The list will be able to compensate for Christian absenteeism with the diaspora vote, especially since some of its members have close relations with Lebanese living in Senegal, Nigeria, France, the United States and Britain and are betting on a massive vote this year.

The protest movement will also be able to count on Sunni votes in Shebaa and in the Khatib family, which in 2018 gave more than 8,500 votes to family member Imad el-Khatib, who had led the 2018 campaign of one of the opposition lists.

Electoral experts anticipated that the Greek-Orthodox candidate on the protest movement’s list could win the seat, one of them saying that “there is even a great chance for a second threshold for the Sunni seat.” They added that at this point it would be simplistic to declare a victory for Hezbollah-Amal as overwhelming as the one in 2018.

Eleven seats to be filled: eight Shiite, one Greek Orthodox, one Sunni, one Druze.

1- Hope and Loyalty: Amal-Hezbollah and their allies

2- Together towards Change: protest movement groups and the Communist Party

3- Voice of the South: incomplete list of independent figures

This article was originally published in French in L'Orient-Le Jour. Translation by Joelle Khoury

This constituency may best represent the two main issues at stake in the upcoming legislative elections, namely renewal of the old elite and the challenge to Hezbollah and the Amal movement’s sway over the political landscape.In the South III constituency, which includes the districts of Nabatieh, Bint Jbeil, Marjayoun and Hasbaya, the battle between the new forces and those of the political...