A plethora of lists divides the opposition

Ego warfare, personal interests and the race to secure an electoral threshold have all shifted the protest movement’s objectives 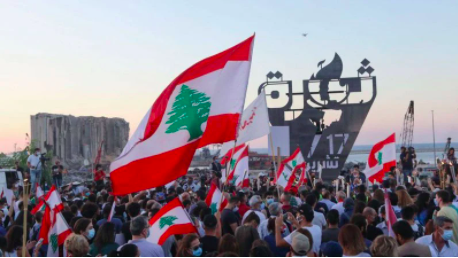 Demonstrations in Beirut in 2020 to commemorate the symbolic date of Oct. 17. (Credit: Anwar Amro/AFP)

It was a birth accompanied by all the usual pains. The opposition parties’ and protest groups’ electoral lists finally emerged, in the form of a stampede instead of a united front.

Up until the last minute before the deadline to form electoral lists, talks continued in an attempt to scrape together the pieces and make yet another effort to merge the lists and rally the people in a dramatic rescue mission.

However, all the protagonists were aware that there is strength in unity and that this was a necessary step to increase the chances of a change in power worthy of the name.

But nothing was done. And it is thus in scattered ranks that the opposition, as it currently exists, will fight a very tough battle on May 15.

With the exception of one constituency, South III, where the movements stemming from the Oct. 17 uprising managed to form a unified list, the rest of the landscape is rather disappointing.

Almost everywhere, fragmentation is the order of the day. It is caused by the appetite for power, the warfare of egos and, to a much lesser extent, differences in ideals, which has dashed the hopes of all those who had bet on a solid front to confront the political establishment that these groups promised to decimate.

“They were almost all in agreement on the slogan ‘eliminate outgoing government,’ but apart from this convergence on the need to renew the political class, there is not necessarily the same vision of the Lebanon of tomorrow,” Karim Bitar, a political scientist, said.

In this varied landscape, there are those who embraced the fight against the political class by resorting to a sovereignist discourse, targeting Hezbollah, its weapons and its allies.

There are also those who joined Kataeb, in terms of defending the principle of Lebanon’s neutrality, in a dynamic that is equally opposed to Hezbollah and its supporters.

A third category of liberal groups under the protest movement’s slogan of the “Kellon yaaneh kellon” (“All of them means all of them”), completes the picture with a multiplicitous left that is distributed on several lists.

In this mishmash, several candidates claiming to be part of the Oct. 17, 2019, protest movement joined March 8 or March 14 lists as well.

“We are facing the ‘Iznogoud syndrome’ or the ‘I want to be caliph instead of the caliph,’ which came to replace the battle of ideas,” said Karim Bitar.

“The protest groups that advocated change have finally been reduced to a race to secure the electoral threshold,” an expert who closely followed up on the formation of lists said.

This fragmentation was aggravated by the “excessive” appetite of some of the leading figures of the protests, such as former minister Charbel Nahas, the founder of the Citizens in a State party (MMFD).

Nahas wanted to fly solo and sponsor nearly 70 candidates across the country. It is a model that resigned MP Paula Yacoubian likely wanted to clone, by supporting, alone, some 13 candidates in more than seven constituencies.

“Charbel Nahas was the smartest [among the protest groups] because he understood that only the political parties can win in this hybrid game,” a former MP said.

To sum it up, there were simply too many candidates for too few seats in an unhealthy and self-destructive race.

“There is an immaturity among the parties stemming from the protest movement, which insist on ideological positions and on personal quarrels which multiplied the vetoes of the ones on the others,” Bitar said.

As a result, no one wanted to sacrifice themselves to make room for others. This is what has often made alliances difficult within groups that are supposed to have minimal homogeneity.

“It’s a real disaster in the full sense of the word,” said a campaign manager of one of the protest parties, who declined to be named.

What happened in some constituencies is symptomatic of what has been described as a “collective delirium” that ended up undermining the ranks of both the opposition and the forces of change.

In Beirut I, three lists supported by protest groups will cross swords. Last Saturday, hopes of reaching an agreement were high, although there was talk of a final obstacle, which was the Christian minorities’ seat.

A last-minute change caused the mediation to fail.

Beirut Madinati, one of the components that were to join the coalition sponsored by Paula Yacoubian, raised the stakes by demanding three seats. Yacoubian then turned to Nahas’ party to negotiate a new deal. In the end, none was made.

In Beirut II, the problem of split was slightly alleviated, but not completely resolved, with the announcement of a main list of the protest groups led by former president of the Beirut Bar Association Melhem Khalaf.

“The problem is that instead of being inclusive, this list embraced exclusion by phasing out high caliber candidates,” the above-mentioned elections expert said, in reference to figures such as Hassan Sinno (Lana party) and Roula Ajouz (Mazallit Beirut).

However, the list managed to bring together some of the protest groups, such as Beirut Resists, Khatt Ahmar, the National Bloc, Tahalouf Watani and independents. But, it lost Beirut Madinati along the way, without succeeding in attracting the Citizens in a State party either, which formed their own list.

In this constituency, the so-called renewal forces will also have to compete for votes with the new so-called opposition figures that MP Fouad Makhzoumi has included in his list.

In Baabda (Mount Lebanon III), Metn (Mount Lebanon II), Kesrouan-Jbeil (Mount Lebanon I) and North III, the reasons behind failing to unite the ranks were also due to a principled position that ended with a splitting of the protest movement into two: whether or not to join the old guard that claims to be the opposition, such as the Kataeb party or former MPs including Neemat Frem and Michel Moawad.

Initially, the protest movement brought together 12 major parties (the G12). Six of them, including the National Bloc, Minteshreen and Khatt Ahmar, were in favor of an alliance with the veterans. Six others, such as Beirut Madinati, Marsad and Lana, were against such an alliance.

Talks to try to cement this bloc continued until the last minute, in the hope that such an achievement could be reflected in the formation of lists, but to no avail.

The enduring split has led to unprecedented situations. In Metn, the alliance agreed to between Kataeb and the National Bloc, which supported Ghassan Moukheiber's candidacy, led the latter to withdraw from the race.

Moukheiber had wanted the thawra (“revolution”) forces to unite their ranks in advance in order to better negotiate a list with Kataeb, and not the other way around. In this constituency, there are lists competing against the Kataeb list, such as Matniyoun Siyadiyoun (Sovereign Metniots) and Citizens in a State, which reduces the chances of the protest movement’s figures achieving a breakthrough.

In Baabda, this horizontal division between opposition groups and forces for change has led to a situation that borders on the absurd.

Two lists —one sponsored by former army general Khalil Helou, who is close to Kataeb, and another with Michel Helou (former director of L’Orient-Le Jour), supported by the NB, which had already concluded an agreement with Gemayel’s party — will compete in a game that already looks like a playoff.

“The negotiations to unify the two lists were intense. Without success,” said a source familiar with the matter. In the end, Khalil Helou ended up maintaining his own list, and Michel Helou as well, thus embarrassing Kataeb.

Last night, the political bureau of the Christian party officially announced its support for Khalil Helou. According to Kamal Feghali, an electoral expert, Kataeb have between “1,500 and 1,800 votes in this constituency” which will benefit the candidate they support.

In North III, the split is also final, even if the Shamaluna alliance — which refused to ally with opposition figures such as Michel Moawad — was able to gather several candidates from the protest movement of a particular caliber on the same list.

In contrast, there is another list formed by resigned MP for Zgharta Michel Moawad, and a third supported by Nahas, and finally the core of a fourth list, bringing together independents.

However, a glimmer of hope emerged from South Lebanon. In the Bint Jbeil-Nabatieh-Marjayoun-Hasbaya (South III) constituency, the alternative forces finally managed to find common ground by merging their lists. Even Nahas agreed to play the game and to join the final list named “Together towards Change.”

It is a successful move in this landscape of desolation. This achievement is all the more commendable because in 2018, the political opposition was divided into four different camps in this constituency.

“The candidates involved showed a very high sense of responsibility and exceptional self-sacrifice. Several candidates withdrew so that the merger could succeed,” said an opposition figure who followed up on the negotiations.

It was a birth accompanied by all the usual pains. The opposition parties’ and protest groups’ electoral lists finally emerged, in the form of a stampede instead of a united front.Up until the last minute before the deadline to form electoral lists, talks continued in an attempt to scrape together the pieces and make yet another effort to merge the lists and rally the people in a dramatic...