#1 Are Lebanese alternative parties that different from traditional ones?

Parties emanating from the popular uprising are proposing a new approach to politics. Conflicting egos and difficulties in taking a clear position on key issues are, for the moment, clouding the success of the project. 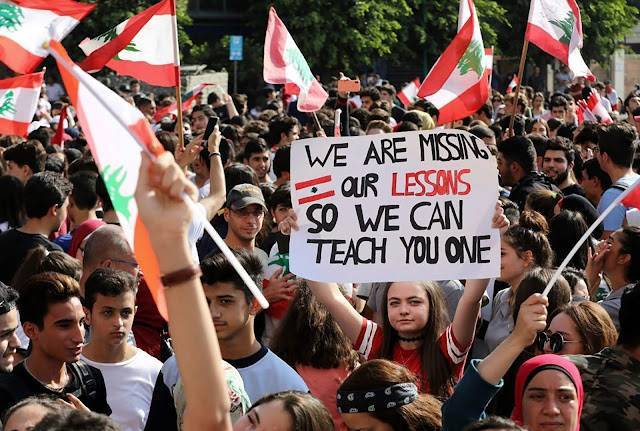 In the wake of the Oct. 17, 2019 uprising, a swarm of movements was born, many of which developed into alternative political parties.

Many now covet power and promise to give meaning to political change, which has been practically absent from the Lebanese landscape since certain parties have monopolized power by closing off the system. For instance, this has been the case of Hezbollah, the Amal movement and the Free Patriotic Movement since 2008.

Will the new alternative parties be able to do better? Ultimately, are they so different from the traditional political establishment that they criticize mercilessly?

“The old guard has set the bar so low that it is not very difficult for them to do better,” said political scientist Karim Mufti, reflecting upon the political class’ decadeslong mediocrity.

While it is still too early to make a judgment at this stage, given that the active protest groups have not yet been faced with the vicissitudes, temptations and dangers of power, one can only note that a new way of doing politics has emerged.

After Oct. 17, which turned the streets into a pedestrian zone, an army of experts and young activists with diplomas came on TV to oust the conventional figures who had little to say to citizens overwhelmed by the scale of the crisis.

A new discourse — more rational, less personal — has emerged, as has a new way of thinking about public affairs. “One of the added values we can offer is an honest discussion and enunciation of principles, values and ideas we advocate,” said Zeina Helou, activist and expert in voting behavior.

These principles include the need to shake up the whole sectarian edifice upon which the country has been operating for decades. The alternative movements and parties, the vast majority of which advocate secularism, are aware of the Lebanese political system’s dysfunction and the need to introduce radical structural reforms.

The new discourse is about rethinking power sharing, taking it away from the quotas of sectarian “zaims” and “fromagistes” (cheese eaters), as former President Fouad Chehab called them.

“One of the important differences is that the traditional parties remain sectarian, family or militia parties, while the emerging alternative parties are mostly cross-sectarian and deeply hostile to [political] sectarianism. The traditional parties claim to be modern, liberal and democratic, while they remain stuck in their conservatism,” said Karim Bitar, a political scientist.

A fundamental change of mentality has encouraged the introduction of a new logic advocating citizens’ rights at the expense of the discourse of Christian, Shiite, Sunni or Druze rights.

“We are consistent with ourselves and categorically refuse to give a rostrum to Dar al-Fatwa or Bkirki,” said Helou, in reference to the new groups’ denunciation of the religious institutions’ predominant role in politics.

The new parties can also boast of their distinguishing themselves from the political establishment by introducing mechanisms of accountability, a culture that has been absent from the institutional and political spheres for decades.

“It is about the principle of accountability of the traditional parties that got it all wrong since the 1990s without ever getting worried about it,” Mufti added.

The new actors are determined to change these practices. “These newcomers have realized that the basic problem is not the lack of solutions to defective services, such as electricity, but the political blockages. There is a political-financial oligarchy and private interests that continue to prevail and to block all potential reforms,” he noted.

Hence, the parties stemming from the uprising have worked on the idea that change will be gradual, and must undoubtedly go through a shift in mentalities and political mores; it is a long-term process.

In the meantime, there is also the problem of the “political-sectarian entrepreneurs,” as Bitar described them. “They are very powerful. They have thick skin and will not fall easily,” said Mufti.

This is what differentiates them from the new political actors, who are often considered as naive as altar boys in comparison with the ruling class.

The reformers also want to give concrete answers and solutions in terms of public policy and restoration of service. These groups proposed dozens of studies and projects on all public policy issues, such as electricity, industrialization, bank restructuring and agriculture.

A number of them have developed a series of cost proposals, which can be part of the election campaigns for those who have decided to run in the May legislative elections.

“I challenge any traditional party to tell us what’s its vision for the country, if it has ever developed a project on a specific issue, including maritime assets, water scarcity or the rehabilitation of the banking sector,” Helou said. “The alternative parties have done it,” she added.

Circles close to the protest movement praise the newcomers’ ideological variety, as well as the breadth of the intellectual currents and socio-economic programs, ranging from the liberal right, social democracy, radical left, and the various shades of socialism.

While this variety of thought is healthy in a democracy, it has not been reflected in purely political issues, which also highlights the approach’s limitations. The alternative parties are certainly more serious, more rational, and provide technical solutions, but without solving the political Gordian knots that remain at the heart of the problem.

The issue of Hezbollah is the best example. On this subject, the new elites are deeply divided and ended up splitting along lines similar to the traditional parties, without however managing to make a clear position on this taboo issue.

A balance between identity and coherence

Many of them have simply chosen to avoid the issue, preferring to postpone the debate on such a divisive subject.

Others have argued that the priorities lie elsewhere, i.e., in the socio-economic reforms. Few in the protest movements are in favor of Hezbollah maintaining its weapons. But some felt that this should not be the sole focus.

These divisions demonstrate that, as a whole, the alternative parties have so far failed to take a clear position on geopolitics and diplomacy, and have in turn become stuck in the quicksand of a debate that they have brushed aside, because it is unfruitful.

“We must find a balance between identity and coherence in foreign policy — a problem that is the main issue separating the March 8 and March 14 camps,” Mufti said.

Another source of contention that fully divided the alternative parties is the alliance with certain figures or traditional parties, such as the Kataeb, or so-called independent figures who were part of the old order.

“It’s the root of the problem,” said Mufti, in reference to the disagreements between the different actors within the opposition.

This problem ended up undermining the movements and parties that emerged from the uprising, which are now divided into two groups: Those who consider that an alliance with parties like the Kataeb — “a conventional party that has nevertheless made its act of contrition and repentance” — is legitimate. Others, described as purists, radically refuse this choice and prefer to run alone.

“The real challenge is how to reconcile pragmatism with our dreams of change. Apparently, the new generation wants much more clarity in alliances, in political discourse, in positions,” said Michel Doueihi, a candidate registered on the independent Shamaluna list in North III.

Many believe that a unification of ranks is counterproductive, as the electorate is itself very fragmented. “Pooling resources is not necessarily the best strategy in a context like Lebanon,” said Mufti.

Meanwhile, Helou said, “Our ultimate goal is not to concoct electoral alliances, but long-term political alliances.”

Beyond the strategic and political quarrels, the new parties have not yet really distinguished themselves from the old order in their ability to put the general interest ahead of the personal ambitions of the few.

“They are affected by the predominant disease in Lebanon — bloated egos and personal ambitions. The main temptation for many of them is to imagine a role for themselves that is out of proportion to their real power,” Bitar said.

This is first article in a series on Lebanon's new political parties in the runup to the May 15 elections.

In the wake of the Oct. 17, 2019 uprising, a swarm of movements was born, many of which developed into alternative political parties.
Many now covet power and promise to give meaning to political change, which has been practically absent from the Lebanese landscape since certain parties have monopolized power by closing off the system. For instance, this has been the case of Hezbollah, the...