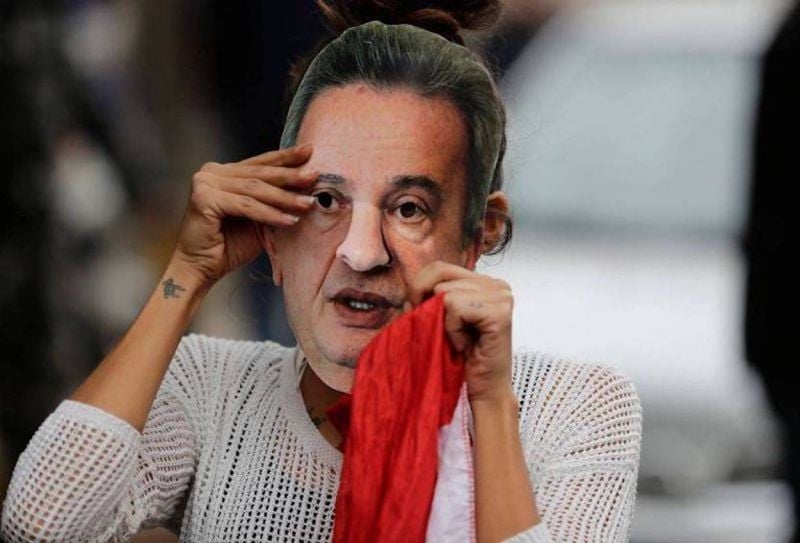 A protester holds a mask of BDL Governor Riad Salameh during a sit-in in front of Beirut's central bank headquarters in November 2019. (Credit: Joseph Eid/AFP)

We are pleased you are joining us for the journey, and we are looking forward to hearing your questions and opinions.

The International Monetary Fund is back in town. The negotiating team headed by Ernesto Ramirez Rigo arrived in Beirut on March 27 and will be staying until mid-April. Prime Minister Najib Mikati announced the visit last week from the Doha Forum. It seems that getting back into the Gulf countries’ good graces infused Mikati with an extra dose of optimism, as he announced that a deal with the fund will be signed in the next two weeks. Mikati has made similar optimistic promises before, and so far, they have not panned out, but perhaps this time will be different.

The events of this past week suggest that change could well be upon us.

On Wednesday the cabinet finally approved a capital control draft law, but not before it tried for the second time to sneak a version through the Parliamentary joint committees without the required approval from cabinet. This raises questions about the government’s ability to follow its own procedures. Approving the draft law and sending it to parliament should be a straightforward process but perhaps supporting unpopular measures could be construed as political suicide. In a rare display of solidarity among political parties, Deputy Parliament Speaker Elie Ferzli; Ibrahim Kanaan, chair of the Finance and Budget Committee; Georges Adwan, chair of the Administration and Justice committee and a long list of MPs from various political blocs, came out frantic from the meeting, indignant that the government had circumvented procedure and sent a text without proper endorsement. They all found fault with the document, particularly with the section that confers unrestricted powers to a committee composed of the Prime Minister, the Finance Minister, the Economy Minister and finally the central bank governor. However, the text has now boomeranged back to Parliament, albeit with minor modifications.

If passed by Parliament,the capital control draft law, as amended by the government, will be valid for two years and will confer responsibility for implementing the law to a committee composed of the finance minister, the central bank governor, two economic experts and a judge. The economic experts and the judge will be handpicked by Mikati.

In six months, the government has managed to pass the buck to Parliament on the capital control law and on the 2022 budget. The IMF wants proof of progress. In addition to the capital control law and the 2022 budget, which the parliamentary Finance and Budget Committee is going over with a fine-tooth comb, the audit of the central bank’s accounts and the economic recovery plan are the most important requirements to any potential agreement.

As far as the audit of BDL goes, the cabinet approved during the same Wednesday meeting the payment of fees to the auditing companies Alvarez & Marsal, Oliver Wyman and KPMG. The unpaid fees is said to have been one of the main reasons the audit had stalled, so fingers crossed that it is just a matter of time before the public gets a glimpse of the final reports.

However, the economic recovery plan, also a requirement to reach an IMF deal, remains as elusive as ever. Previous leaks revealed the government’s thinking on the way it is planning to deal with the financial sector losses, lirafication — converting part of the foreign currency deposits into lira — and bail ins — exchanging deposits into shares in banks.

The plan apparently was not acceptable to the IMF’s team, who did not mince words when explaining to their local counterparts the rudimentary financial concept of hierarchy of claims, which dictates that depositors come last in line when distributing losses, behind the government, the central bank and finally the banks’ shareholders. Deputy Prime Minister Saade Chami, however, continues to insist that the losses borne by the government should be limited to ensure debt sustainability, yet he has no qualms when proselytizing about the increasing size of the financial sector losses, estimated initially at $69 billion in December, then revised to $73 billion by early March. An additional $4 billion may be loose change for an economy the size of the United States’, but when a country’s domestic production is only $20 billion, an extra 20 percent brings a lot more pain.

No overview would be complete without mentioning the Salameh brothers, Riad and Raja. Their saga has taken this week a turn for the worse — or for the better, depending on one’s point of view. Since Raja was arrested two weeks ago on charges of complicity in illicit enrichment, events have accelerated. His arrest itself was unexpected, given that high-profile figures in Lebanon rarely face legal or judicial consequences in cases of alleged wrongdoing, and the fact that he remains in state custody has been even more baffling to many observers.

Adding to the confusion is the recent flurry of back-and-forth legal filings between Mount Lebanon Public Prosecutor Ghada Aoun, the judge behind Salameh brothers’ recent legal misfortunes, and Nicholas Mansour, the lead investigating judge at Mount Lebanon Court of Appeal, who is currently in charge of Raja’s case. The upshot so far is that Raja remains in jail, despite Mansour having authorized his release on bail alongside the imposition of a travel ban and a freeze on assets.

Judge Aoun has appealed Mansour’s decision, and it will be up to the Indictment Chamber to issue the final verdict. Raja’s lawyer has also filed a request with the same chamber to review the bail amount, set by Mansour at LL500 billion. This is the highest amount ever in the history of the Lebanese courts,the equivalent of $22 million when converted at the current parallel market rate.

Riad on the other hand was more careful; after his indictment by Judge Aoun for illicit enrichment on March 21, he kept a low profile and made the central bank’s headquarters his permanent residence. He has few other options, having been banned from traveling since Jan. 11 by Judge Aoun. Furthermore, on March 28, the European Union's criminal justice agency announced it had frozen $132 million of Lebanese assets, an action German prosecutors later confirmed to be related to the multiple cases filed against Riad Salameh in different European jurisdictions.

Not even an invitation to attend the cabinet session on Wednesday was enticing enough to lure the central bank chief out of hiding.

Despite all the distractions, Salameh managed to find the time to extend the deadline of Circular 161 until the end of April. The BDL governor, under political pressure and assured of a swift deal with the IMF, has trapped himself in a one-way strategy since Dec. 16. The cost of stabilizing the lira is too massive to ignore. The latest numbers, from April 1, show that the central bank has used up $1.6 billion from its foreign currency reserves in the three months since the start of the intervention.

None of the economic markers has shown signs of improvement, and Russia’s invasion of Ukraine has led to a sharp increase in the price of commodities, not to mention the complete dependence of Lebanon on these two countries for its food needs. Eventually, and with no IMF deal in place, the moment Salameh decides to put an end to Circular 161, the lira will sink like a stone with nothing left to backstop it, not even the dazzling rhetoric of Lebanese officials.

Another piece of news that may have fallen off the radar but is too important to ignore is related to the recovery of cash and financial portfolios that were transferred abroad after October 17, 2019. A joint parliamentary committee session scheduled on Wednesday to work on the law, failed to achieve the required quorum and the session was postponed. Some stones are better left unturned.

In the meantime, in a galaxy far away, Saudi Arabia sent $5 billion to the central bank of Egypt while Qatar announced it is investing around the same amount in Egypt’s economy. Despite talk of a rapprochement between Lebanon and the Gulf, the Gulf countries so far appear unwilling to loosen their purse strings in a similar fashion for Lebanon.

With the recent accelerated pace of financial events intertwined with unprecedented confrontations between the judiciary and commercial banks and between the judiciary and the governor of the central bank Riad Salameh and his entourage, we decided to take a step back from the daily mayhem and show you how these fit into the bigger picture. We are pleased you are joining us for the journey, and...