The international community waits for a chance to catch Lebanon out

All Western embassies agree that the pretext that the government lacks the necessary funds to proceed with elections scheduled for May 15 is not acceptable in any way. 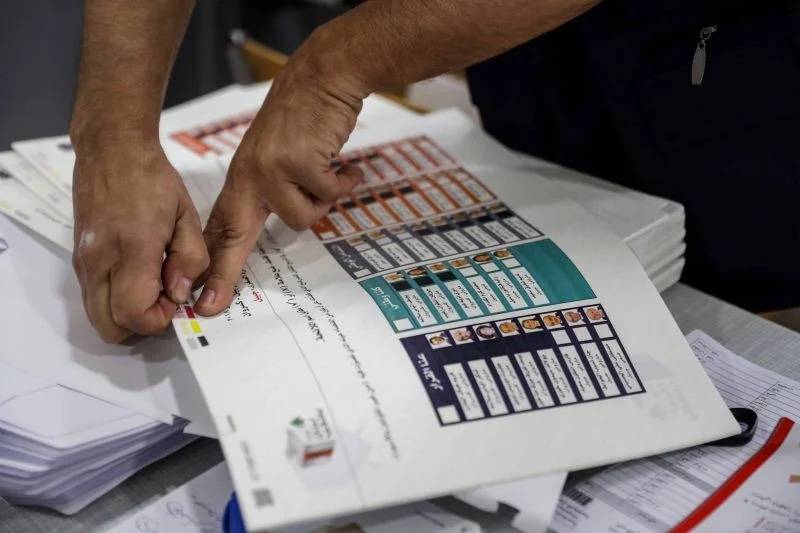 Civil servants organizing the lists of voters in a polling station in Jbeil, during the legislative elections of May 2018. (Credit: Joseph Eid/AFP)

Internal and international pressures have forced the government to finally decide, albeit a little late, to fulfill its most basic duty to finance the legislative elections, slated for May.

The international community warned in a series of strongly worded messages, backed by civil society groups, against any attempt to delay the legislative elections, which led the cabinet to approve a credit transfer of LL40 billion from the state budget reserves to the interior ministry to cover the elections’ cost.

Parliament must also vote in favor of a LL60 billion treasury advance to the Foreign Affairs Ministry for the Lebanese nationals living abroad to vote on May 6 and 8. Another LL260 billion advance to cover the total cost of the elections on the Lebanese territory, which is estimated at around LL300 billion, must be approved by Parliament as well.

While the executive branch ended up making things right in terms of allocating funding, concerns continue to mount that the elections will be postponed or called off. Be they official remarks and analyses, references to this scenario have increased over the past two weeks. It almost feels like there is an attempt to prepare the people, in a slow but steady way, for the possibility that the ballot will be sabotaged— a ballot the international community absolutely desires to see held on time.

Commenting on the government’s decision, Aly Sleem, executive director of the Lebanese Association for Democratic Elections, said, “It is a first step that is certainly praiseworthy, but it came a little bit too late, and only under pressure, while the [elections] date is just around the corner.”

The night before, the Electoral Reform Coalition, of which LADE is an active member, warned in a press conference against any attempt to torpedo the elections. “The lack of seriousness in the organization and management of the ballot shows that we are faced with two options: it is either a prelude to the cancellation of elections, or a sign that they will lack integrity, transparency and democracy,” the statement said.

A few hours ahead of the cabinet session on Tuesday, a meeting was held at the Interior Ministry, at the UN’s request, bringing together multiple international stakeholders, including France and civil society representatives. The meeting aimed to take stock of the preparations for the parliamentary elections and to call to order the authorities who have been dragging their feet on the matter under a variety of pretexts.

Clearing his name from the accusation leveled by the head of state three days ago, Interior Minister Bassam Mawlawi said, “Tell me where our ministry failed to meet its obligation.” Michel Aoun had struck pre-emptively, holding the Interior Ministry and the government responsible for a possible cancellation of legislative elections, washing his hands of any responsibility for annulling the ballot. “The problem does not have to do with the president, but rather with the government,” Aoun told the press on Saturday.

Founded by Aoun, the Free Patriotic Movement, which risks losing the largest number of seats in the event that the elections are held as planned, is not the only party that fears parliamentary elections.

Fearing this ultimate test that could show how seriously their popularity has been hurt, the country’s traditional political players have exchanged the accusation of seeking to sabotage the electoral process.

A set of sanctions

The major powers are watchful and will not accept any excuse to torpedo the elections. A French diplomatic source said there is absolutely no wiggle room to call off or delay the ballot. This firm tone reflects an equally uncompromising position that US Ambassador to Lebanon Dorothy Shea voiced to Reuters.

​​“The international community is unanimous that the elections must be held on time in a fair and transparent manner,” Shea told Reuters. “There's no wiggle room.”

The American diplomat, who spoke on behalf of all international partners, paved the way for an equally intransigent statement made on Feb. 11 by the International Support Group for Lebanon, which called on Lebanese officials to comply with constitutional rules and deadlines.

“The sad truth is that the international community has no means of deterrence. Beyond the usual protests in the event the vote was canceled, there are no retaliatory measures that would really hurt, even if this would mean that the already delegitimized political class would lose even more of its legitimacy,” Karim Bitar, a political scientist, told L’Orient-Le Jour.

However, both the US and France, and more discreetly the European Union, assure anyone who will listen that Lebanon can longer benefit from extenuating circumstances, and that the political establishment risks facing an array of concerted sanctions this time around.

According to a European diplomatic source, pressure for the elections to take place is being maintained. Failing that, the EU — which unanimously adopted a sanctions policy on the matter last summer — has a whole range of tools that can be employed.

The policy provided for the possibility of sanctioning Lebanese personalities or entities should they decide to cancel the polls.

‘They are testing our patience’

The US, the first to have inaugurated the sanctions policy against Lebanon, will not stand idly by either, and appears to be planning on wielding this weapon in turn.

“Future sanctions are already being discussed among members of Congress. Should the legislative elections be torpedoed, the US will most likely resort to the Magnitsky Act,” Toufic Baaklini, director of the Washington-based In Defense of Christianity foundation, told L’Orient-Le Jour.

The Magnitsky Act is a law applied in cases of corruption, abuse of power and violation of human rights. In November 2020, Free Patriotic Movement leader Gebran Bassil was sanctioned on the basis of this act.

An American diplomat confirmed that there would indeed be a series of sanctions in the event the elections were torpedoed.

What’s more, the international community is well aware of the argument of lack of funds necessary to hold the elections and has decided to provide significant financial, material, technical and political support to the electoral process — a commitment that the ISG reiterated on Feb. 11.

Lebanon’s international partners are unlikely to let go and are endeavoring to counter any excuse the Lebanese authorities might be tempted to make to cancel the vote.

In this vein, a French diplomatic source recalled that the EU is the main donor, along with the US Agency for International Development (USAID), of the assistance program for the holding of elections, sponsored by the UNDP, which has offered substantial aid to help finance the electoral process.

The UNDP program, dubbed the Lebanese Elections Assistance Project 2020-2024 (LEAP), offers technical assistance of up to 6 million euros, allocated to the purchase of equipment (paper, ink, etc.) as well as the printing of ballot papers.

The EU is also allocating an additional 5 million euros to observing and ensuring the smooth holding of the scheduled elections.

The USAID program contributes up to 2 million euros to support the electoral process, which will have a total cost of $18 million, according to the Lebanese government’s estimation.

​​This article was originally published in French in L'Orient-Le Jour. Translation by Sahar Ghoussoub and Joelle El Khoury.

Internal and international pressures have forced the government to finally decide, albeit a little late, to fulfill its most basic duty to finance the legislative elections, slated for May. The international community warned in a series of strongly worded messages, backed by civil society groups, against any attempt to delay the legislative elections, which led the cabinet to approve a credit...