A document listing 12 'conditions' for restoring diplomatic relations with the Gulf was handed over to the Lebanese authorities by Ahmad Nasser al-Mohammad al-Sabah at Riyadh’s request. 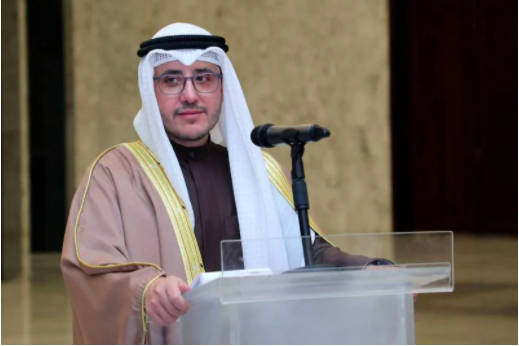 Admittedly, the Kuwaiti foreign minister’s visit to Lebanon over the weekend is of political significance.

This was indeed the first trip of an official representing the Gulf monarchies since the beginning of the diplomatic crisis with Lebanon, which erupted at the end of October 2021 against the backdrop of former Lebanese Information Minister George Kurdahi’s scathing remarks about Saudi Arabia’s war in Yemen.

In light of these developments, the Kuwaiti senior official’s visit is seen as a first step on the road of restoring relations.

“I bring three messages: the first is our solidarity with the Lebanese people; second, our desire that Lebanon would not serve as a platform for attacks on the Gulf countries; and finally, that the land of the cedars adheres the reforms that are required of it,” Ahmad Nasser al-Mohammad al-Sabah said at the beginning of his visit, which, according to him, aims to “restore confidence” with Lebanon.

But beyond these three “messages,” a list of 12 “ideas and proposals” were handed over to the Lebanese authorities, which were called upon to give their answer by Saturday, Jan. 29, during a meeting of Arab foreign ministers in Kuwait, including Lebanon’s Foreign Minister Abdallah Abou Habib.

“We will today look into the Kuwait letter and finalize everything before Saturday,” Abou Habib said from Baabda Palace on Jan. 24.

These proposals were presented by the Kuwaiti senior official in Beirut in coordination with Arab countries in the Gulf, notably Saudi Arabia, and they reflect the “unchanging Saudi conditions” vis-à-vis Lebanon.

Sabah also said that he was visiting Lebanon in his capacity as a representative of the Gulf countries.

“It was Saudi Arabia that requested Kuwait to lead this initiative,” an Arab diplomat said.

“Nobody wants to abandon Lebanon, but the country’s authorities must implement what is required of them so that the Lebanese state regains its place as a founding member of the Arab League whose decisions should be respected,” the source added.

These statements were confirmed by a Saudi diplomat, who told L’Orient-Le Jour on condition of anonymity that “Saudi Arabia has accepted Kuwait’s initiative to visit Lebanon and hand the authorities a document of 12 conditions that the country must undertake in a bid to restore relations.”

This means that Kuwait’s initiative cannot be seen in isolation from Riyadh’s contacts since Kurdahi’s resignation in December 2021, which were reflected in a pledge of goodwill on the eve of French President Emmanuel Macron’s visit to Jeddah.

On the sidelines of a meeting with Saudi Crown Prince Mohammad bin Salman, Macron, who’s closely following up on the Lebanese issue, announced an initiative that would create a “French-Saudi humanitarian support mechanism,” which would be financed by Riyadh and other Gulf countries, and a commitment to restoring ties between Lebanon and the kingdom.

Paris and Riyadh had, however, conditioned the restoration of relations on “the need to restrict the possession of weapons to legal state institutions,” a jab at Hezbollah, which is the only party to have kept its arms at the end of the 1975-90 Civil War.

What is required of Lebanon?

The “proposals” of the Kuwaiti senior diplomat are the same as the Saudi conditions imposed by Riyadh at the Jeddah meeting between Macron and MBS, notably the respect of the Taif Agreement and the need to hold elections on time, the implementation of political and financial reforms in accordance with the terms of the International Monetary Fund and the international community.

The Kuwaiti letter also refers to UN Security Council Resolutions 1559 (with regard to the disbandment and disarmament of militias, including Hezbollah) and 1701 (which in 2006 reinstated a cessation of hostilities between Israel and Hezbollah).

It also mentioned the need for Lebanon to readopt a policy of disassociation and non-interference in the affairs of Arab countries, notably the Gulf countries, stressing the state monopoly on arms, control of borders and crossing points, as well as the need to strengthen security measures at the ports and airport to prevent drug trafficking into Saudi Arabia.

Lebanon is also called upon to prohibit any political activities carried out by parties hostile to the kingdom and the Gulf monarchies, in reference to the conference that was organized a few weeks ago in Beirut by a Bahraini opposition group, and another more recent conference sponsored by Hezbollah in support of the opposition to the Saud regime.

Also in the document, Hezbollah is requested to cease its interference in the conflict in Yemen and to stop receiving Houthi rebel fighters.

“The document sets the bar very high and contains conditions that are very difficult to meet entirely,” the Arab diplomat said.

“But any response from Lebanon is supposed to pave the way for negotiations with the Gulf countries and lead to the signing of a joint charter stipulating an end to political, media and military aggression against the monarchies,” he added.

Commenting on whether the document clearly requires that Hezbollah withdraws from Yemen, the diplomat said this is “an essential condition, even if it is a difficult objective to achieve.”

“But usually, in negotiations, each party raises the stakes in a bid to get their own way. It is a long road that is also intricately linked to regional and international developments,” the source added.

On Lebanon’s side, the authorities seem to welcome Kuwait’s approach.

“Lebanon wants to rehabilitate relations with the Gulf and is ready to coordinate with these monarchies to restore confidence,” a close associate of Mikati told A document listing 12 “conditions” for restoring diplomatic relations with the Gulf was handed over to the Lebanese authorities by Ahmad Nasser al-Mohammad al-Sabah at Riyadh’s request..

The source, however, added that some points “cannot be settled quickly because they are part of a broader regional context that goes beyond Lebanon, such as the weapons of Hezbollah and its positioning.”

Meanwhile, a source close to Lebanon’s President Michel Aoun said that he was the first to call for improving diplomatic relations with the Gulf.

“The president went so far as to criticize Hezbollah, his ally, calling on it to stop undermining relations between Lebanon and these countries,” he said, adding that the president had recently invited Lebanese political leaders to the negotiating table to discuss the national defense strategy, but was unsuccessful in his endeavor.

For his part, Parliament Speaker Nabih Berri also reacted positively to the Kuwaiti initiative, according to a source close to him.

The president, the speaker and the premier will collaborate in order to present a written response announcing Lebanon’s total commitment to restoring relations with the Arab countries and the Gulf monarchies.

According to a government source, the Hezbollah issue will be discussed within a regional context that goes beyond Lebanon’s borders and can only be resolved within the framework of a global agreement.

Meanwhile, according to Hezbollah sources, the Shiite party denounces any attempt by Saudi Arabia to impose its will on Lebanon through diplomatic channels after having failed to do so through politics and on the ground.

Admittedly, the Kuwaiti foreign minister’s visit to Lebanon over the weekend is of political significance.This was indeed the first trip of an official representing the Gulf monarchies since the beginning of the diplomatic crisis with Lebanon, which erupted at the end of October 2021 against the backdrop of former Lebanese Information Minister George Kurdahi’s scathing remarks about Saudi...