After the reported failure of a political compromise, the Constitutional Council loses its voice

The Constitutional Council’s deliberations led to a non-decision on Tuesday, meaning the Free Patriotic Movement has lost its battle and the amendments to the electoral law are binding. 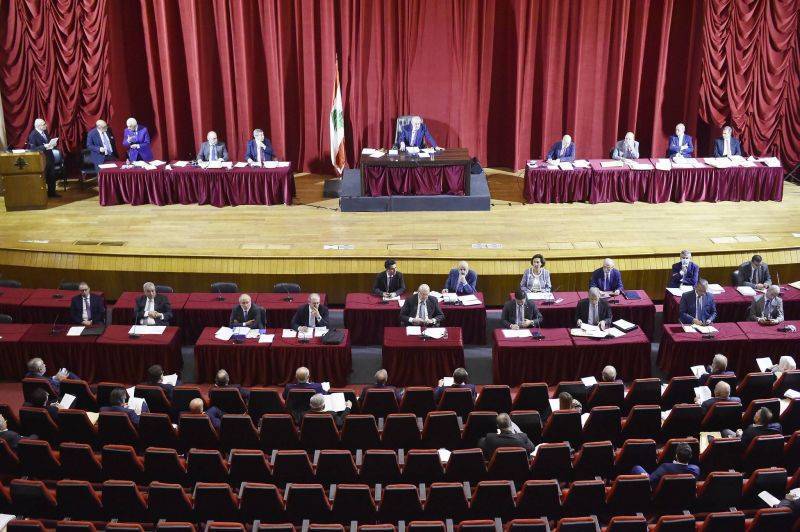 Parliament met on Oct. 28 to discuss the amendments made to the electoral law. (Credit: Hassan Ibrahim/Lebanese Parliament)

In the last 48 hours, the country has narrowly escaped the fallout of a political maneuver aimed, primarily, at debunking Tarek Bitar, the judge heading the investigation into the deadly Aug. 4, 2020 Beirut port explosion, as Hezbollah wants. But what resulted from this escape is also less than ideal.

Meeting yesterday for the seventh time to discuss the appeal for the invalidation of the recent amendments to the electoral law presented by Gebran Bassil’s party the FMP, the Constitutional Council failed to take a final decision on the matter. This means that the appealed amendments to the electoral law are now de facto in force. The FPM’s appeal concerned several points, the most important of which are the terms under which expatriates will vote in next year’s legislative elections and the means by which Parliament counted a majority as being in favor of the amendments in question.

During a parliamentary session on Oct. 28, devoted to the study of the amendments made to the law after President Michel Aoun returned them to the legislature for further discussion, Parliament Speaker Nabih Berri gave a personal interpretation of Article 57 of the constitution. This text is, however, very clear. It stipulates that Parliament should vote on a law referred by the head of state by an absolute majority (half plus one) of the total number of deputies who “legally compose the Parliament.”

The required majority is therefore 65 deputies out of 128. However, Berri did not interpret it that way. He had set the majority required to pass the law amending the electoral legislation at 59 out of 117 deputies. It was under this logic that the holding of the elections on March 27 instead of at beginning of May was approved by a majority of 77 votes (including those of the Hezbollah parliamentarians), while the vote of emigrants in Lebanon’s 15 existing constituencies (instead of in a special six-member 16th constituency) was approved by a majority of 61 votes.

Clearly, the members of the Constitutional Council avoided drowning in the maze of electoral and political calculations. But it remains that the interpretation of Article 57 of the constitution was at the heart of the debates between the 10 judges who make up the body, and who in their overwhelming majority are supported by the main local protagonists. A judicial source told L'Orient-Le Jour that the members of the Constitutional Council presented various interpretations of the article in question, particularly with regard to the calculation of the majority required to pass a law. In such cases, the council does not usually make a decision, the source said, assuring that the divisions within the council are not confessional or political.

However, the argument does not seem very convincing. This is also what emerges from information L’Orient-Le Jour was able to obtain from corroborating sources.

A lawyer who has followed the case closely suggested that the judges in the orbit of the Shiite parties Amal and Hezbollah very rarely deviate from the order issued by the political parties in question. They would thus have opposed the FPM’s appeal.

From judicial sources, it is also understood that the two Sunni judges were in favor of the Aounists’ appeal, despite the completely frozen relationship between the FPM and the Future Movement.

Similarly, sources indicated that four Christian judges were in favor of accepting the appeal, while the fifth, an independent judge, was opposed, as was the Druze judge. The six in favor were not enough to tip the balance, as the council’s decisions are taken by a majority of seven votes (out of 10).

“No compromise in the making”

The non-decision of the Constitutional Council came as several local media outlets reported a package deal in the making to bring the cabinet of Prime Minister Najib Mikati out of the artificial coma in which it has been placed for more than two months, due to disagreement among its ministers over the future of Bitar’s leadership of the port blast probe. Hezbollah insists on Bitar’s dismissal from the probe, while Berri’s party Amal wants the judge’s remit in respect to prosecuting ministers and MPs curtailed. Under the latter’s preference, the political figures prosecuted in the probe would be tried before the Supreme Council — a judicial body established to try presidents and ministers.

According to reports, the broad outlines of the deal included the Constitutional Council’s acceptance of the appeal presented by the FPM in exchange for the FPM’s acceptance of at least a limiting of Bitar’s remit in the port investigation. This would pave the way for a meeting of cabinet, during which a new president of the Supreme Judicial Council (Maronite), the highest judicial body, would be appointed, as well as a new public prosecutor (Sunni) and a new financial prosecutor (Shiite).

However, “the council’s decision proves that there was no package deal in the making,” a source close to Berri commented. “It is now up to the president to convene the electoral college for a vote to be held on March 27,” the source added, knowing that Aoun was clear that he would only accept the dates of May 8 or 15 for the holding of the legislative elections, and that for elections to be held in March the president would have to sign the decree convening the college before Dec. 27.

This article was originally publish in French in L'Orient-Le Jour.

In the last 48 hours, the country has narrowly escaped the fallout of a political maneuver aimed, primarily, at debunking Tarek Bitar, the judge heading the investigation into the deadly Aug. 4, 2020 Beirut port explosion, as Hezbollah wants. But what resulted from this escape is also less than ideal.Meeting yesterday for the seventh time to discuss the appeal for the invalidation of the recent...