While Saad Hariri continues to be absent from the local scene and appears to be keeping the future of his political movement in limbo, his rivals are trying to stand out from the country’s main Sunni party in a bid to galvanize support for the upcoming legislative elections. 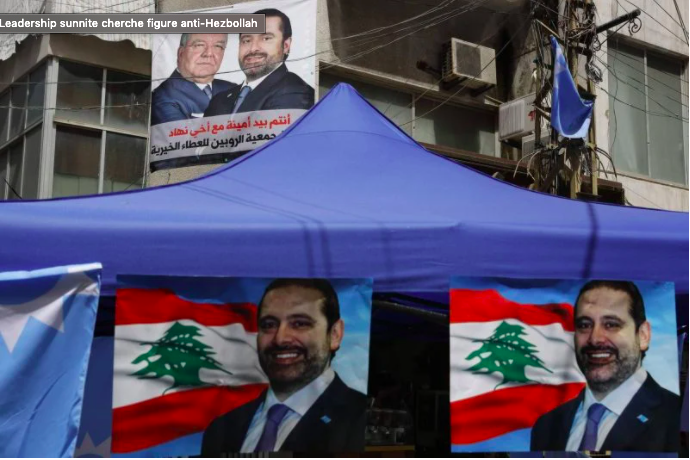 An electoral poster depicting Nouhad Machnouk (left) and Saad Hariri, candidates on the same list in Beirut II during the legislative elections of 2018. “You are in good hands with my brother Nouhad” can be read. Joseph Eid / AFP

“The premiership has been idle since 2009,” former Interior Minister and MP Nouhad Machnouk said in November.

These incendiary remarks by the Sunni politician who defected from Saad Hariri’s Future Movement sum up the deep frustrations on the Sunni political scene, which sees itself undermined locally and regionally, overshadowed by Iran’s influence in the country through Hezbollah, its Shiite protégé.

In 2009, Hariri took office as prime minister. The son of Lebanon’s former Prime Minister Rafik Hariri, he wanted to live up to the role his father played during the 1990s at home and abroad until his assassination in 2005. He wanted to prolong his father’s political legacy.

Today, a few months from the parliamentary elections, ambiguity continues to reign over Hariri’s political future and that of his political party.

According to several corroborating sources, the former premier is not likely to toss his hat in the ring in the upcoming elections, leaving the arena free for his rivals, who have been overshadowed by the Hariris’ monopoly on the country’s Sunni leadership for the past three decades.

“Saad Hariri failed to do what his father had done. [Hariri senior] managed to undercut the traditional political familes in a bid to consolidate his position as the leader of the Sunni community,” Bassam Hammoud, the head of the Islamic Group [or al-Jama'ah Al-Islamiyah, a Sunni Islamist political party] in the south of Lebanon, told L’Orient-Le Jour.

Mustafa Alloush, the Future Movement’s vice president, denied all claims that the Hariri family seeks to control the Sunni community in the country.

“The main political families have maintained their positions. In Tripoli, for instance, more or less half of the votes went to the Future Movement, and the other half to the rest of the Sunni figures,” Alloush said.

Politically monochrome or not, it is clear that several question marks hover over the cohesion of Sunni leadership in Lebanon.

For Ashraf Rifi, a Sunni hawk of the “sovereignist” camp [or anti-Hezbollah political forces] and former justice minister from 2014 to2016, the answer is crystal clear. “The Sunni leadership is collapsing,” he said.

“But that does not mean the end of the community,” Rifi told L’Orient-Le Jour in his office, the walls of which are adorned with portraits of Rafik Hariri and other assassinated politicians from the March 14 camp.

For the former director of the Internal Security Forces, known for his rocky relations with the Future Movement, Saad Hariri made a series of political mistakes, notably by being overly conciliatory with Hezbollah and its allies.

As a result, “the community with the largest demographic weight is now the weakest,” he said.

Back in 2005, Hariri was part of a quadripartite alliance with the Progressive Socialist Party of Druze leader Walid Joumblatt and the Shiite parties, Hezbollah and the Amal Movement.

He had subsequently adhered to a modus vivendi strategy with Hezbollah, which raised the ire of Saudi Arabia, Hariri’s political patron.

In a bizarre sequence of events in November 2017, Hariri, then prime minister, was said to be held in Riyadh and coerced to resign from his post.

Today, those who are seeking to take over the Sunni leaders appear to want to undercut Hariri’s relatively conciliatory policies toward the party of God.

“There is a Lebanese and Arab appetite for an anti-Hezbollah discourse, which could explain the rhetoric of certain Sunni figures who were previously more in the background,” a Sunni MP, who wished not to be named, told L’Orient-Le Jour.

It is in this context one ought to examine the actions of Bahaa Hariri, Saad’s brother, who, through his Sawa Li Lubnan Movement [Arabic for Together for Lebanon], began to move his pawns ahead of the legislative elections.

Resentment against Hezbollah grew after the Oct. 14 shootout in Beirut’s Tayyouneh district between Amal Movement supporters and armed men allegedly belonging to the Lebanese Forces, which left seven people dead and dozens injured (the LF has denied involvement).

The bloody clashes brought back to mind the events of May 7, 2008, when Hezbollah invaded neighborhoods in West Beirut and the Chouf area, following the decision of the government of then Prime Minister Fouad Siniora to cut off the Shiite party’s parallel telecommunications network.

The Sunni community was particularly traumatized by this sequence of events, which left its leadership helpless and unable to defend Beirut’s neighborhoods against the Shiite militia.

Meanwhile, LF leader Samir Geagea described the Oct. 14 events as a “mini-May 7” against Christians, where his young supporters were able to “defend” themselves.

While the Future Movement called into question its modus vivendi with Hezbollah after Oct. 14, Alloush stressed his party’s political choices.

“We are keen on preserving the civil peace and intercommunity dialogue. Those who want to brandish populist discourse and run the risk of a civil war are free to do so. We have never stopped them,” he said.

But, businessman and MP Fouad Makhzoumi has a different opinion.

“Saad Hariri wanted to be a partner of the Shiite party, and ended up being its puppet,” Makhzoumi, whose name has been mentioned several times for the premiership, said.

“We must take advantage of the 2022 elections to break the majority held by Hezbollah and its allies in Parliament,” he added.

However, regardless of the party that holds the majority in Parliament, the sectarian power sharing in Lebanon is based, especially since the 2008 Doha Agreement, on the logic of compromise amongst the main sectarian stakeholders — a logic that imposed itself on Saad Hariri’s political path.

This prompts Rifi to consider that Hariri’s “real mistake” was the October 2016 presidential compromise that ended a 30-month-long political vacuum, which was the result of the impasse created by Hezbollahd and the Free Patriotic Movement to have Michel Aoun elected as president.

The agreement saw the former Maronite army general ascend to the presidency and Hariri to the premiership.

"The vacuum was much better than what we are experiencing today. This excuse should have not been used to offer the country to the Iranian side,” Rifi said.

Machnouk appears to concur with the former minister’s statements.

“The presidential compromise was a mistake and I regret having taken part in it. But this is not the main cause of our community’s decline,” Machnouk told L’Orient-Le Jour.

“Since the government of national unity [of Saad Hariri] was overthrown in 2011 by Hezbollah and its allies, the prime minister’s role as the guarantor of political balance in Lebanon has been undermined. The scales have tipped in favor of Hezbollah,” he said.

Machnouk’s office is not lacking in portraits of Rafik Hariri. The former Future Movement member was closer to Hariri senior, and began drifting away from his son in the aftermath of the 2018 legislative elections.

Sources close to Hariri claim that Machnouk’s “personal ambitions” were behind his defection from the Future Movement — statements that he squarely rejects.

But how to deal with Hezbollah, a powerful armed movement with 100,000 fighters in its ranks, according to the party leader Hassan Nasrallah? In recent years, the party has managed to have the upper hand in any state decision.

Rifi believes that Hezbollah’s disarmament is more the responsibility of regional powers than Lebanon’s, stressing that armed confrontation must be avoided.

“We must prevent Hezbollah’s armed operatives from leaving the party’s strongholds while waiting for a regional agreement on its disarmament,” he said.

Machnouk, however, appears to be more confrontational in this regard.

“We must create a united Sunni front that would suspend [Hezbollah’s] participation in government, paralyzing political life until the Shiite party agrees to make concessions,” he said.

“I propose that this Sunni front would call for including a national defense strategy in the ministerial statement as a condition of [the party’s] participation in any future cabinet,” Machnouk added.

A coalition in this sense seems indeed to be the only option for the fragmented Sunni political community, which has yet to produce a new leader — something that even Rifi and Machnouk admit, considering that only a web of “mini-leaderships” could emerge on the Sunni regional landscape.

“No one can reclaim the monopoly on Sunni leadership today,” Jamil Mouawad, a political science researcher, said.

“The Sunni scene today looks more of a heterogeneous group with different political movements of different orientations, especially in the absence of support from a regional power, mainly Saudi Arabia,” he explained.

Mouawad also argues that Saad Hariri’s exit from the political scene should not be yet considered a foregone conclusion.

“The Future Movement leader has not yet taken his final decision, even if he does not participate in the upcoming parliamentary elections. He is likely to remain influential, at least in the foreseeable future,” he said.

Mouawad concurs with Alloush, who warns those who are getting ahead of themselves by claiming the end of the Hariri camp.

“The Future Movement is likely to survive even if Saad Hariri is out of the picture. The party could choose another figure to succeed him. I know that Hariri’s aunt, Bahia, is ready to take on this role,” Mouawad said.

According to several sources, Bahia Hariri fears closing all the doors to the Hariri family.

Siniora, who is traditionally close to the Hariri family, previously serving as the head of the Future Movement parliamentary bloc, appears to be keeping a low profile for the moment.

According to some observers, however, he could be a possible successor to Hariri on the Sunni political landscape.

“The premiership has been idle since 2009,” former Interior Minister and MP Nouhad Machnouk said in November.These incendiary remarks by the Sunni politician who defected from Saad Hariri’s Future Movement sum up the deep frustrations on the Sunni political scene, which sees itself undermined locally and regionally, overshadowed by Iran’s influence in the country through Hezbollah, its...