While Macron and MBS capitalized on their recent summit, can Lebanon take advantage? 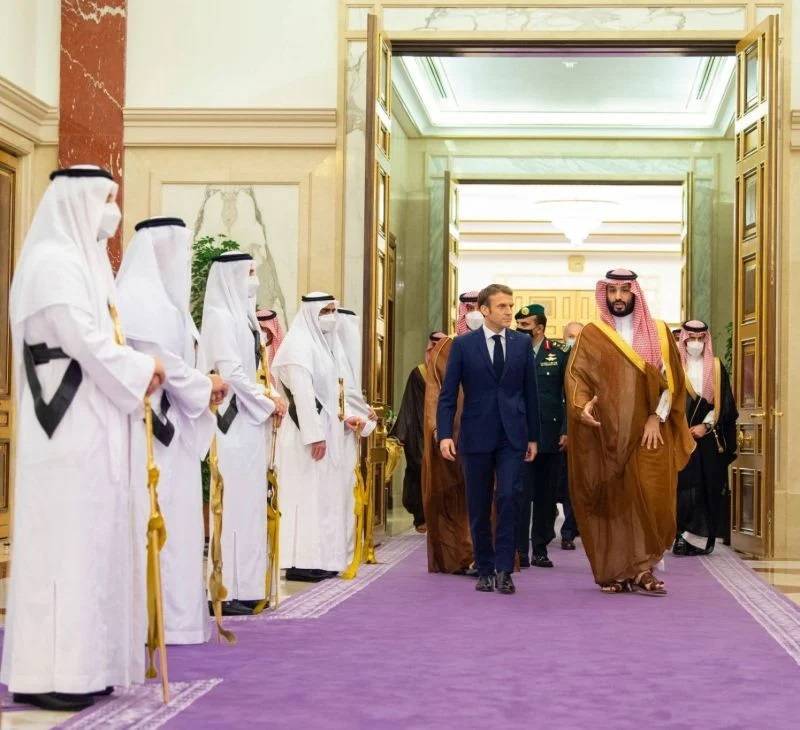 Hardly anyone believed that Lebanon could be placed back on the Saudi agenda and that Riyadh could demonstrate a willingness to assist the crumbling country. However, the meeting Saturday between French President Emmanuel Macron and Saudi Crown Prince Mohammad bin Salman was a breakthrough for Lebanon’s faltering relations with Riyadh.

By managing to get Lebanon back on track with Riyadh, at least as a matter of Saudi lip-service for the time being, French President Emmanuel Macron has presumably succeeded in his plan to advocate for Beirut once again.

For his part, bin Salman, the heir to the Saudi throne who fell out of favor with the West following the 2018 murder of Saudi journalist Jamal Khashoggi, has also found his groove by hosting a key Western leader at his residence.

While the two leaders managed to take advantage of this historic visit, can Lebanon for its part, which was a key dossier at this meeting, claim success? The answer is neither obvious nor positive. No concrete results have been visible yet.

The remarks of former March 14 alliance Secretary-General Fares Soueid probably best sum up the French-Saudi diplomatic breakthrough. He said Lebanon should take the hand that’s just been offered to it.

“The [Jeddah] summit has been a meeting point of two ambitions: that of a young Arab leader who has positioned himself as a key figure in the region” and a French president seeking diplomatic success ahead of a re-election battle next spring, Soueid, an expert on Lebanese-Saudi relations, said.

Following their meeting on Saturday, Macron and bin Salman pledged to restore relations between Beirut and Riyadh — an ambitious objective following Saudi Arabia’s declarations that Lebanon is under Iran’s thumb.

The two leaders called on Lebanon’s political caste to abide by the Saudi-brokered Taif Agreement, which according to their joint statement enables the preservation of “national unity and civil peace in Lebanon.” This reminder was followed by another requirement: “The need to restrict the possession of weapons to the legitimate state institutions,” while simultaneously strengthening the role of the Lebanese army so as to ensure state sovereignty.

This convergence between Riyadh and Paris on certain sovereignty-related fundamentals demonstrates a rapprochement between the two sides. It is also proof that the criticisms, which some parties leveled against France for going too far in its complacency towards Iran regarding the Lebanese dossier, were unfounded. In fact, the monthslong delays to the formation of Najib Mikati’s cabinet in September had prompted Paris to urge Iran Iran to break the political deadlock.

“By agreeing with his Saudi interlocutor on the need to restore sovereignty and respect [UN Security Council] resolutions, the French president managed to reestablish a particular balance, while proving that Paris is closer to Riyadh than to Tehran when it comes to the substance of the problem,” a political analyst told L’Orient-Le Jour.

This point of view is even shared among Hezbollah circles. The French are interested in ensuring Lebanon’s stability, and “do not want to see Lebanon as an Iranian or Turkish zone of influence, but rather returning to the Arab fold,” an analyst close to Hezbollah says.

While Macron and bin Salman scored victories, for Lebanon, one would be overly optimistic to believe that this is more than a minimal success and a temporary improvement of the image of Prime Minister Najib Mikati, who notched a conference call with the Saudi crown prince and French president Saturday.

One thing is sure, the establishment of a French-Saudi humanitarian aid mechanism for Lebanon, which could be financed by Saudi Arabia and other Gulf countries.

“The Franco-Saudi initiative involves the provision of humanitarian aid to Lebanon which will be granted under transparency conditions,” Khaled Batarfi, a Saudi scholar and analyst, says.

Yet, this assistance will probably not exceed the humanitarian aspect. “We can expect the current restrictions to be lifted, but I don’t believe that Saudi Arabia would provide financial assistance unless new elements are made available,” on the Lebanese side, a French diplomat specializing in Saudi political affairs, told L'Orient-Le Jour on condition of anonymity.

Saudi media has been downplaying the scope of the commitments made by both sides as long as the essence of the problem between Riyadh and Beirut persists.

The kingdom believes that Lebanon, or rather the political majority in power, has given up its Arab roots for some time and has given free rein to Hezbollah. Riyadh has accused the organization of supporting the Houthis in the Yemen war and posing a threat to Saudi and regional national security.

Although Macron and bin Salman discussed the need to restore diplomatic relations between Beirut and Riyadh this concession is far from being established for the moment.

“The possible restoration of normal diplomatic relations depends heavily on the Lebanese political class’s ability to comply with the terms listed in the joint Franco-Saudi statement,” Batarfi adds.

Just as the political conditions made by Riyadh and Paris are difficult for Lebanon to meet at the moment, so are the reforms required to unlock any potential aid.

France and Saudi Arabia called for Lebanon to reform its financial and electricity sectors and fight corruption as well as for Mikati’s cabinet to resume work. This last condition is hard to meet as long as Hezbollah continues to paralyze the government, which has not met since Oct. 12, with its calls for Judge Tarek Bitar to be removed from the investigation into the Aug. 4, 2020 Beirut port explosion.

“On Monday, the situation will be back to square one, as well as the conflict over the Bitar affair,” Soueid says.

Progressive Socialist Party leader Walid Jumblatt fears the same vicious circle. Jumblatt, who praised France, asked how progress can be achieved while the government is paralyzed.

“During this dry period which involves the risks of falling into the abyss of the unknown, Macron’s initiative, which is designed to save Lebanon, is remarkably courageous. Yet, one must not forget the forces of the darkness and their traditional role of scuttling and killing everything,” the Druze leader wrote in a tweet, in an implicit reference to Hezbollah.

Hardly anyone believed that Lebanon could be placed back on the Saudi agenda and that Riyadh could demonstrate a willingness to assist the crumbling country. However, the meeting Saturday between French President Emmanuel Macron and Saudi Crown Prince Mohammad bin Salman was a breakthrough for Lebanon’s faltering relations with Riyadh.By managing to get Lebanon back on track with Riyadh, at...