Why has Bitar not been able to resume his investigation into the Beirut port explosion yet?

Although Judge Habib Mezher was suspended and the Court of Cassation has been determined as the sole court authorized to examine appeals against the investigative judge, the latter has not resumed the probe yet. 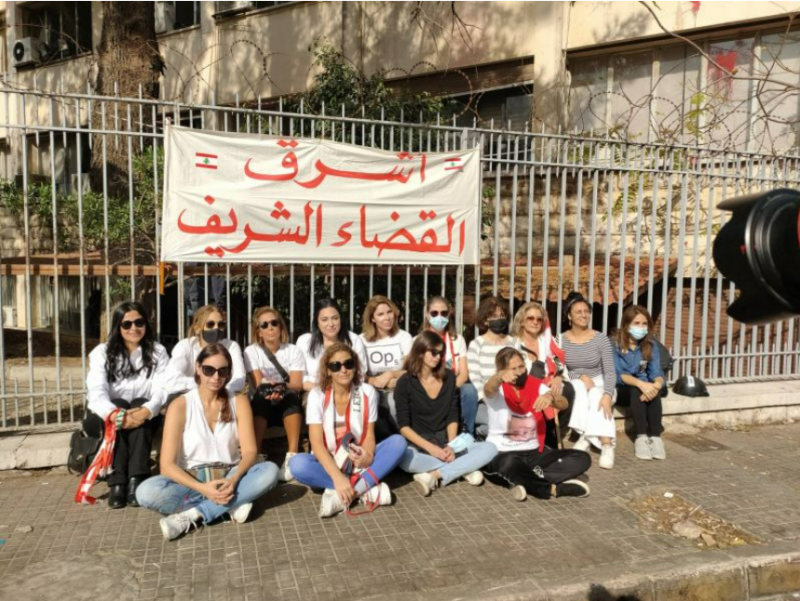 Members of the Noun collective in front of a poster on which is written: "The honorable judiciary shines." (Credit: Claude Assaf/OLJ)

The recent judicial measures should have allowed Judge Tarek Bitar to resume his probe into the Aug. 4, 2020, Beirut port explosion. However, obstacles continue to prevent him from getting back on the case.

The judicial decisions that were taken in Bitar’s favor include a ruling issued last Tuesday by the First President of the Beirut Court of Appeals, Judge Habib Rizkallah, who decided to remove Judge Habib Mezher, the interim head of the Beirut Court of Appeals’s Twelfth Chamber, from reviewing a lawsuit by former minister Youssef Fenianos seeking to remove Bitar from the case. Bitar had issued an arrest warrant in absentia against Fenianos in September.

Mezher had exceeded his prerogatives three weeks earlier, according to Rizkallah, and rushed to notify Bitar of the filing, which triggered a suspension of the probe.

The second decision is supposed to prevent the investigative judge from being repeatedly stalled in his case. The Court of Cassation’s General Assembly ruled on Friday that only one of its chambers has the authority to examine appeals requesting Bitar’s recusal. Why, then, has the judge leading Lebanon’s investigation of the century not yet resumed his work?

“Since Mezher notified Judge Bitar of the lawsuit filed by Fenianos requesting to have him removed, it is therefore necessary that this notification be revoked so that Bitar can resume his investigation,” Saeed Malek, a public law specialist, told L’Orient-Le Jour.

He added that Rizkallah is the authority entitled to retract this notification.

Elvia Saghbini, member of the Noun collective, which organized a sit-in outside the Justice Palace this week to pay tribute to the judges who rejected several lawsuits against Bitar last week, urged Rizkallah to “revoke the notification that Mezher addressed to Bitar, so that the latter can resume his hearings.”

The activist, who called to “put an end to political interference,” believes that “the first president of the Beirut Court of Appeals has already procrastinated enough when it took him three weeks to decide that it is about two separate cases,” in reference to the two recusal appeals filed by Fenianos requesting the dismissal of Beirut Court of Appeals’s Twelfth Chamber president Judge Nassib Elia as well as Bitar.

Fear of yet another recusal?

On the other hand, a lawyer who declined to be named argued that a notification cannot be revoked

“This is not an arrest warrant that a judge can reverse,” he said, explaining that the probe’s resumption mainly depends on Judge Rizkallah appointing a president of the Twelfth Chamber, a post that has been vacant following the successive recusals of Elia and his replacement Mezher.

Hence, Rizkallah, who must allocate the tasks to the judges, must appoint one of their colleagues to preside over the Twelfth Chamber.

It is up to the Twelfth Chamber’s president, along with his two counsellor judges, to rule on the request to have Bitar removed, whether Elia ultimately stays in his post or is replaced.

One of the two counsellors, Rosine Hjeili, is also subject to a recusal appeal as part of the legal imbroglio caused by the politicians implicated in the probe. If the lawsuit to have her removed is accepted, Rizkallah must appoint a replacement. Otherwise, Hjeili will be able to take the bench again.

No matter who the chamber’s members and president are, they must necessarily declare that they do not have the jurisdiction to examine the request to remove Bitar, given that the General Assembly of the Court of Cassation has limited the examination of such appeals to one of its chambers.

Once the Twelfth Chamber renders its ruling, Bitar will be able to resume the probe. However, a lawyer familiar with the case anticipates that Fenianos or the other officials implicated in the case will then lodge a new lawsuit before the Court of Cassation to have the judge disqualified and that the subsequent notification of the request would result in suspending the case for the umpteenth time…

The lawyer says that it is unfortunate that the Court of Cassation determined that only one of its chambers has the competence to recuse an investigative judge at the Court of Justice, while the law does not address this point.

“The courts interpret laws, but cannot replace them,” he said

The lawyer underscored that “the loophole in the judicial texts should be closed in a new law that would settle the question of whether or not it is possible to remove the judge.”

The recent judicial measures should have allowed Judge Tarek Bitar to resume his probe into the Aug. 4, 2020, Beirut port explosion. However, obstacles continue to prevent him from getting back on the case.The judicial decisions that were taken in Bitar’s favor include a ruling issued last Tuesday by the First President of the Beirut Court of Appeals, Judge Habib Rizkallah, who decided to...