A politician and ex-militiaman, bearer of a national project and Christian leader: the head of Lebanese Forces is constantly driven by these dualities 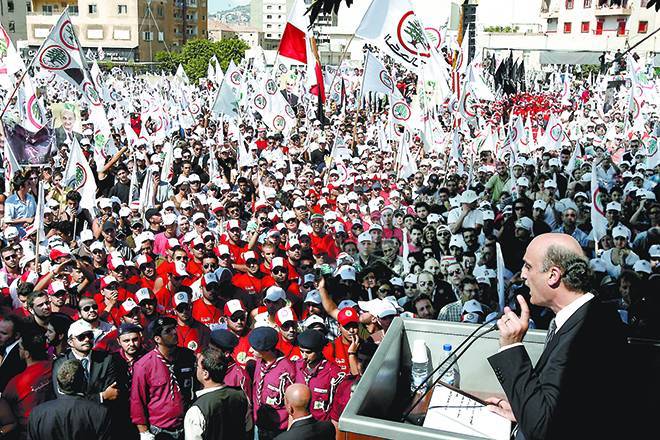 Samir Geagea during the Lebanese Forces' “martyrs mass” on September 21, 2008, during which he admitted his mistakes and those of his militia during the war. (Credit: Ramzi Haïdar/AFP)

The sky was cloud-covered over Ghodreis, where Samir Geagea resided, on April 21, 1994, although it was springtime. An army unit was there looking for the Lebanese Forces leader in order to take him to the Defense Ministry in Yarze, where a solitary confinement cell awaited him.

“I want you to show courage. I can hang in there for ten years,” the ”Hakim,” Geagea’s nickname, Arabic for doctor, told his comrades.

In the midst of the screaming, crying and swearing, Geagea stayed calm.

“Shut the door behind me,” he said before departing.

Geagea would remain behind bars for 11 years, three months and five days until he was freed on July 26, 2005.

The leader of the LF, a militia created by Bashir Gemayel and turned into a political party,was the only warlord who paid the price of being part of the Lebanese Civil War that the 1989 Taif Accord had officially ended.

Following his release from jail, the Hakim claimed to be a new person. The “Samir Geagea of the war died in prison,” he said repeatedly, drawing a straight line to a past that brought him the adulation of some and hatred of others.

He has left no stone unturned for years in his attempt to build himself a different image, that of a statesman, defender of state sovereignty and institutions. Nevertheless, he has not managed to fully forge a new identity for himself or to bury the image of the Christian militiaman that a large segment of the public opinion associates him with.

The Oct. 14 clashes that erupted in Tayyouneh between fighters of the Shiite duo and armed men who are probably affiliated with the LF – an affiliation that the LF, however, denied – brought back memories of this aspect of his persona.

The echoes of the Civil War, in a neighborhood as symbolic as Ain al-Rummaneh, rekindled bad memories and brought back the spectre of the LF leader’s militia past. For better or for worse, this image still brings him the admiration and respect of some, the disgust and fear of others, although 30 years have passed since the war ended. Ambiguous, mystical, this person has never ceased to stir up controversy.

While all other warlords committed horrendous crimes during the Civil War, Geagea’s defenders say, none of them is portrayed by critics as “bloody monster.”

“He was not more violent than the other militia commanders, who were even more cruel sometimes,” Naji Hayek, a former member of the National Liberal Party and present official of the Free Patriotic Movement, said.

Geagea’s problem, he said, is that “he is among the vanquished.”

“They are making him bear the brunt of the past, at a time when there are other [leaders who] have their own militiamen in the streets today, such as Hezbollah, Amal and the Syrian Social Nationalist Party,” Hayek, who has known the LF leader for nearly 40 years, added.

Geagea has a sort of mythology, both positive and negative, surrounding him. It is associated both with his involvement in the bloody episodes that are engraved in the minds, and with his cold and impenetrable personality.

“If some opponents point to his ‘bloody’ past, it’s because during the war he was accused of behaving that way,” Nawaf Kabbara, a university professor, said.

The LF leader was accused of being part of the group that committed the Ehden massacre in 1978, in which Tony Frangieh, son of former president Sleiman Frangieh and leader of the Marada militia, was assassinated in his home along with other members of his family.

He was also at the center of several inter-Christian wars, especially the deadly conflict which led him to expel Elie Hobeika (commander-in-chief of the LF at that time) from Christian areas in 1986 following the tripartite agreement Hobeika signed with the Syrians.

This is not to mention the fratricidal war that pitted Geagea’s partisans against the Lebanese Army under Michel Aoun’s command, in 1990. Moreover, “many Tripolitans are still convinced that he is responsible for the death of (former Prime Minister) Rachid Karameh,” in 1987, Kabbara added.

When the war was over, the LF, like the other militias with the exception of Hezbollah, consented to handing over their heavy weapons. Under the Syrian tutelage, an amnesty law was issued in order to forget war crime in every sense of the word.

However, the text of the law specifies that when a person is involved in a legal procedure, even if not indicted, all the cases of the past could be reopened. The trap had been set. And it would slam shut on Geagea, the only Christian leader capable of standing up to the Syrian occupation, at a time when Michel Aoun was in exile in France.

In 1994, Geagea was arrested and accused of being behind the deadly bombing of the Lady of Salvation in Zouk, Kesrouan in February of that year, which left 10 people dead.

The investigative judge dismissed the case in favor of Geagea. But in 1995 and 1999, the LF chief was the subject of new trials wherein he was sentenced to three death sentences, commuted to life imprisonment, for the assassination of several political rivals, including former Prime Minister Rachid Karameh in 1987; Elias Zayek, an LF official close to Hobeika, in 1989; and finally Dany Chamoun in 1990.

In the wake of the Tayyouneh clashes, the man’s history was brought back to the forefront of the national debate when Geagea was summoned to give testimony before the military court. However,he refused to appear before the tribunal unless “Hassan Nasrallah goes first.”

‘Not against the Islamists in power’

The massive demonstration of March 14, 2005, and the Syrian army’s subsequent withdrawal changed the situation in Lebanon, prompting the Geagea’s release from prison and Aoun’s return from exile.

Granted amnesty, Geagea was released on July 26, 2005. He left Lebanon to seek medical treatment abroad. At the Beirut airport, the meeting with his supporters was emotional.

Many of the young LF members did not even know him. His longtime friends were present there. Embraces, laughter and tears dominated the scene.

Addressing the Lebanese, Geagea said, “The conditions of my imprisonment were very difficult, but I can tell you that I was nonetheless calm, because I was living by my convictions, even in a space of six square meters,” in the Defense Ministry’s basement.

When he got out of prison and in a famous speech during the annual mass in commemoration of the martyrs of the Lebanese resistance in 2008, Geagea appears to have changed his political discourse. He was one of the few Lebanese warlords and politicians — along with Druze leader Walid Joumblatt — to admit his own mistakes and that of his militia during the war.

The “new” Geagea was now advocating a unifying language, notably that of the March 14 coalition.

“His discourse was in line with that of the state. He was upholding a national discourse, one that was not restricted to Christians only,” Hayek said.

The LF leader took the opposite view of the alliance of minorities theory tacitly advocated by his rival Aoun, who had in the meantime allied himself with Hezbollah.

When mass revolutions swept the Arab world, Geagea said audaciously that he was not “against the arrival of Islamists in power,” while some Christians had mounting fears of seeing the Arab Spring turn against them.

Geagea wanted to prove that he was not limited to an identity discourse. Defending his community, however, remained his natural inclination, especially when he felt that he was losing ground among Christians.

Fearing to be overtaken by the Aounist movement, Geagea supported the so-called “Orthodox” election law, which enshrined a form of total confessional federalism.

“The competition with the FPM and his ambition to dominate the Christian scene clouded his vision,” Hayek said.

Three decades after the end of the war, “Doctor” Geagea stands alongside “Mister” Samir. Geagea, the politician, clearly took precedence over Geagea, the militiamen, but without killing him and without even demonstrating a real will to do so, limiting his room for maneuver at the national level.

“Had he not had this heavy past, Samir Geagea could have been a national leader today, especially for all those who oppose Hezbollah, notably among Sunnis,” Kabbara said.

But his main weakness is also his greatest strong point.

In the wake of the bloody Tayyouneh clashes, Nasrallah made scathing comments against the LF leader, in an attempt to arouse in the public any feelings of hatred Geagea might have inspired in the past.

However, the Hezbollah chief appears to have failed in his quest, so much so that many commentators believe Nasrallah did Geagea a favor with these remarks.

By designating him as the enemy that must be defeated, Nasrallah presented Geagea as the main deterrent to the pro-Iranian party in a context where the latter is facing mounting animosity.

In the minds of a large section of the Christian community, Geagea is still seen as a “life insurance” against Hezbollah — a leader capable of defending Christians in the event of conflict with the Shiite party. This dynamic increases Geagea’s viability in the upcoming legislative elections.

With this, it appears that the LF leader may have managed to set the right balance between “Doctor” Geagea and “Mister” Samir, at least in the eyes of a portion of the public.

This article was originally published in French in L'Orient-Le Jour. Translation by Joelle El Khoury and Sahar Ghoussoub.

The sky was cloud-covered over Ghodreis, where Samir Geagea resided, on April 21, 1994, although it was springtime. An army unit was there looking for the Lebanese Forces leader in order to take him to the Defense Ministry in Yarze, where a solitary confinement cell awaited him. “I want you to show courage. I can hang in there for ten years,” the ”Hakim,” Geagea’s nickname, Arabic for...