How Hezbollah lost the Christians’ support

A few years ago, the Shiite party was perceived as a lesser evil compared to the danger of the jihadist groups. But the October 2019 uprising, the crippling economic crisis and the 2020 Beirut port explosion have changed this dynamic. 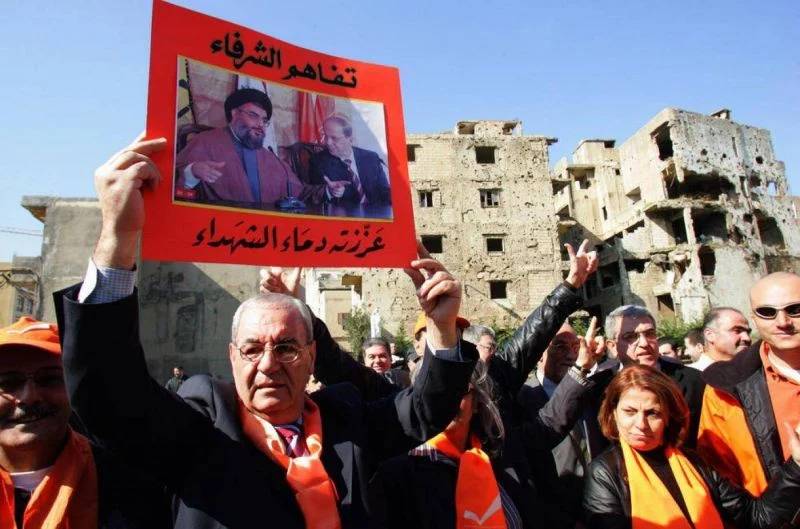 CPL supporters hold a photo of Michel Aoun meeting Hassan Nasrallah, in front of the Mar Mikhael church, after a mass for the victims killed in riots near this church on Feb. 3, 2008. (Credit: AFP)

At the end of August 2017, the towns of al-Qaa and Baalbeck were celebrating.

The jihadist specter, which had been hovering over these Christian towns bordering Syria since the radical groups of Jabhat al-Nusra and the Islamic State took control of some areas in the nearby hinterlands, was finally gone.

Hezbollah, which had been engaged in the Syrian war for several years, had just pulled off a masterstroke. After a landmark operation, with the support of the Lebanese Army, the Shiite party had succeeded in warding off the jihadist threat.

The party’s propaganda was going at full throttle: Hezbollah was the protector of Lebanon.

The message could not be clearer: Without us, swathes of Lebanese land would have ended up under jihadist groups’ control; without us, Lebanon would have suffered the same fate as Iraq and Syria, with ISIS controlling large swathes of the territory.

But how could an armed militia, which operates outside the laws of the state and in service of a foreign country, act as a protector of Lebanon? This notion appealed to a portion of the Lebanese population, including a large section of the Christian community.

This, however, does not mean that Christians have become pro-Hezbollah as a community or that their divisions around this issue have disappeared.

But whether they publicly uphold this opinion and or are reluctant to admit it, many Christians at that time believed that Hezbollah was able to prevent a jihadist breakthrough in the land of the cedars. They viewed the Shiite party as the lesser of two evils.

“Aware that they would be the first to pay a high price for any jihadist incursion in Lebanon, Christians had indeed considered that Hezbollah was in some way a savior,” Michel de Chadarevian, a former Aounist supporter, tells L’Orient-Le Jour.

Four years later, this period seems like a distant memory. In the town of al-Qaa, people continue to mourn the death of Sahar Fares, a young woman member of the Civil Defense who died in the Aug. 4, 2020, Beirut port explosion.

This tragedy, which hit Christian neighborhoods hard, was the last straw for many Christians, who now accuse Hezbollah of being directly responsible for the blast.

In the span of a few years, the “Party of God” lost much of the credit and reputation it had taken 10 years to build among Christian communities.

It all started in 2005. Michel Aoun, the founder of the Free Patriotic Movement had returned to Lebanon from France, where he had been in exile for more than a decade. He soon realized that he needed a strong ally to be able to “conquer” the country and eventually become president.

Aoun’s supporters went to the streets in the massive March 14 demonstrations marking the one-month anniversary of the assassination of former Prime Minister Rafik Hariri.

The ensuing March 14 political camp, however, did not want Aoun to be part of it; or rather, it did not want him to be its leader, despite Aoun’s resounding victory in the legislative elections in the same year.

This prompted Aoun to make a crazy bet. He forged an alliance with Hezbollah in February 2006, while a few months ago, he had been quick to launch tirades against the party’s weapons.

The army general had such a strong influence among Christians that he managed to make them swallow the pill of this turnaround although it went against the grain.

“We should not forget that a large section of the Christian community was anxious to put an end to the slogans of Christian militias. As a consequence, some of them found it difficult to accept the idea of a Shiite militia as a substitute,” Naji Hayek, an FPM official, says.

The alliance between the two was built at the leadership level. Meanwhile, the Christian and Shiite supporters among both parties’ rank and file kept their distance from each other.

But among a portion of the Christian community, the idea of Hezbollah as an ally in a predominantly Sunni region was taking hold.

The alliance of minorities theory was gaining ground and culminated with the Syrian war’s outbreak and the rise of Sunni jihadist groups.

Shiite Islamism appeared to pose much less of a threat than its Sunni counterpart to the Christian minority’s survival.

Even Maronite Patriarch Bechara al-Rai aligned himself with the position of several eastern churches and echoed the Christians’ apprehension vis-à-vis the jihadist peril.

But Hezbollah failed to win over all the country’s Christians. Many of them were opposed to the regime of Bashar al-Assad in Syria and castigated the party’s involvement in the Syrian war.

The Shiite party’s actions, however, were tolerated more than ever compared to a more threatening danger . But the moment would not last long.

Aoun finally became president in 2016, the ultimate sign of the partnership's success and, paradoxically, the beginning of the Hezbollah agreement’s descent into hell.

The president had promised reforms, and even championed the fight against corruption, and his powerful ally was ostensibly there to help him win this battle.

With Hezbollah’s help, Aoun also sought to put an end to the ruling troika of then-Prime Minister Saad Hariri, former MP and then-Progressive Socialist Party head Walid Joumblat and Parliament Speaker Nabih Berri, who were accused by the Aounists of having seized power at the expense of the Christians in the aftermath of the 1975-90 civil war.

The Shiite party, however, appeared not to be ready to fulfill its end of the bargain. The criticisms repeatedly voiced by Aoun’s son-in-law and FPM head Gebran Bassil to this effect were unequivocal.

Hezbollah never accepted to alienate its ally, Berri, decried by the FPM as being responsible for all the country’s ills.

Hezbollah “is reduced to defending Khalil’

The Shiite party claimed to defend revolution and the oppressed, but it effectively became the main sponsor of the establishment and defender of the status quo — something that was clearly evidenced with the outbreak of the October 2019 uprising.

For Karim Emile Bitar, a political scientist, the decline in Hezbollah’s popularity began with the first speeches of the party’s chief, Hassan Nasrallah, just after the Oct. 17, 2019, popular demonstrations.

“With the October revolution and then after the Aug. 4, 2020, Beirut port explosion, it became evident that Hezbollah, which has long presented itself as an opposition and anti-establishment group, was rushing to rescue a political ruling class that is corrupt to the core,” Bitar says.

Not only Hezbollah is now considered by many to be a bulwark against change, the party is also accused by a large portion of the Christian population of being behind the crippling economic crisis that’s rocking the country.

On the one hand, according to them, Hezbollah turned a blind eye and even participated in the looting of the state. On the other hand, they also blame the party’s presence for Lebanon’s international isolation.

A proof of this is Rai’s toughened discourse vis-à-vis the Shiite party, which the Maronite patriarch considers to be a state within a state.

The 2020 explosion came to further alienate Hezbollah from Christians, some of whom accuse it of being directly involved in the blast. The fact that Hezbollah is also now trying to obstruct the much-anticipated investigation into the explosion further complicates its relations with Christians.

“Twenty-five years ago, Hezbollah was a group that fought against [former Israeli prime ministers] Ariel Sharon and Benjamin Netanyahu, and against the Israeli occupation,” Bitar says.

“Today, it is reduced to defending Ali Hassan Khalil, Ghazi Zeaiter and Nouhad Machnouk, [three top officials implicated in the explosion probe], against an honest judge who is trying to put an end to more than a decade of impunity,” he adds.

In this context, even the alliance with the FPM has seriously faltered but is maintained at the leadership level, despite major differences, Nasrallah having absolutely need of Bassil and vice versa.

Among the Aounist ranks, however, this partnership has become increasingly difficult to defend.

“This forced marriage could not last, simply because Christians support the concept of the state and the monopoly on legitimate violence. This project turned out to be in total contradiction with Hezbollah’s doctrine based on the velayat-e faqih [guardianship of the Islamist jurist],” Hayek says.

Meanwhile, Naim Aoun, a former FPM partisan, says, “Over time, we have found that this partnership was made not in the interest of the FPM, its popular base or even Christians, but quite simply to serve two key people in the party, [Aoun and Bassil] and that Hezbollah was ready to defend whatever they do at all costs.”

‘Fed up with Hezbollah’s arrogance’

Things took another turn for the worse with the deadly clashes that took place in Beirut’s Tayyouneh area [on Oct. 14] between the supporters of Hezbollah and the Amal Movement, and armed men allegedly belonging to the Lebanese Forces. (The LF has denied this).

Christians appeared to overwhelmingly gang up against the two Shiite parties. On Monday, LF leader Samir Geagea was summoned to the hearing by the military tribunal [to explain his party’s alleged connection to Tayyouneh’s fighting].

This dissuaded the most hardline among Christians, who “are fed up with Hezbollah’s arrogance,” according to Antoine Nasrallah, a former FPM official.

“The alliance of minorities in the region that had long fueled the rhetoric of the Syrian regime and Hezbollah is no longer relevant,” says Ziyad Sayegh, a public policy expert.

Nasrallah devoted his entire Oct. 18 speech to addressing Christians, which was an indication that he is well aware of the high stakes for his party, and the risk of seeing his political ally lose in the upcoming elections, mainly because of their partnership.

Hezbollah’s leader tried to convince his Christian audience not to join the LF, but his arguments seemed to date from another time — when a large portion of Christians did not view the Shiite party as the main threat to their existence.

At the end of August 2017, the towns of al-Qaa and Baalbeck were celebrating.The jihadist specter, which had been hovering over these Christian towns bordering Syria since the radical groups of Jabhat al-Nusra and the Islamic State took control of some areas in the nearby hinterlands, was finally gone.Hezbollah, which had been engaged in the Syrian war for several years, had just pulled off a...