What do we know about Hezbollah’s troops?

Hassan Nasrallah said on Monday that his movement has 100,000 fighters. Experts say this statement should be taken with a grain of salt. 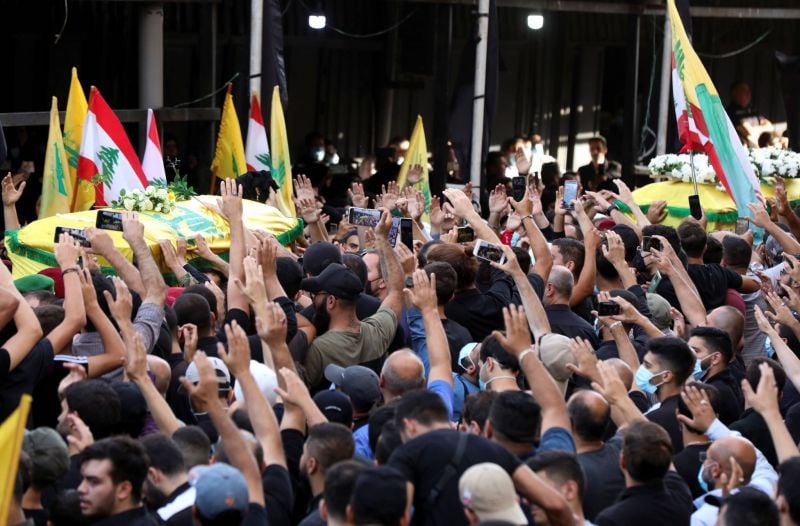 Hezbollah supporters at a funeral in Beirut on Oct. 15 (Credit: Mohamed Azakir/Reuters)

Monday was the first time Hassan Nasrallah appeared to lay bare the number of fighters within his party’s ranks.

The Hezbollah leader said on Monday evening that he had 100,000 men under his command, bewildering experts and other observers. As the party is usually discreet about its military capabilities, the Shiite movement’s decision to unveil these data was surprising.

“Hezbollah’s military apparatus is one of the most secretive in the world; even the Israelis are not really sure about the information they have. This is one of the party’s strategic assets,” says Bachir Saade, a religion and politics lecturer and researcher at the University of Stirling in the United Kingdom, and the author of Hizbullah and the Politics of Remembrance: Writing the Lebanese Nation.

Nicholas Blandford, a Beirut-based researcher with the Atlantic Council, whose work has studied Hezbollah for 25 years, gives the same appraisal.

“In general, Hezbollah is silent about its military capabilities. From time to time, it leaks only rumors, which are confirmed only when the group goes into action. This was the case, for instance, when the party claimed that it possessed Russian Kornet anti-tank missiles at the turn of the millennium, up until it used them in 2005,” the researcher said.

A fighting force this size merits further consideration, particularly because it is at least nominally a militia, not an army. With 100,000 troops, Hezbollah would rank 48th among the world’s largest militaries, higher than the Lebanese Army, which comprises about 60,000 soldiers, a number about equal to the size of the Jordanian Army.

One hundred thousand fighters is a number about three to four times higher than most thorough estimates have suggested in recent years. Jane’s Intelligence Review, a British monthly journal focusing on global security issues, estimated in 2017 that the Shiite party had 25,000 full-time fighters, including special forces, and roughly the same number of reserves.

“Nasrallah is in general known to be precise about the facts he puts forward, but things can always change,” Saade adds. In his eyes, the size Hezbollah leader’s declared is not, however, absurd. “The military apparatus is the party’s priority and the raison d'être,” he says.

The Shiite party has invested heavily in its military wing, especially since the 2006 war against Israel. “Before the 2006 war, Hezbollah had between 3,000 and 5,000 fighters. Since then, this number has been steadily on the rise, and it may have hit 100,000 by now,” Blandford speculates.

Hezbollah’s size has shifted especially throughout the Syrian civil war. Its engagement in the conflict alongside Bashar al-Assad’s regime has enabled the party to promote its capabilities and grow its number of fighters.

“The party keeps around 4,000-5,000 troops in Syria on a permanent basis, but the total number of fighters that were sent there is certainly higher. Its presence there is also governed by turnover. I spoke to a fighter who went to Syria for three weeks, before going back home for a month,” he adds. The Shiite party has lost several thousand men on the other side of the border, according to estimates.

Daher, however, categorically dismisses Nasrallah’s claims. “That is an exaggerated number for sure. One hundred thousand without counting the civil associations — that would mean that all the Shiites in the country are pro-Hezbollah.”

This is not the only reason for experts to be skeptical. There are also financial constraints that are relevant to such a force. “A huge budget would be needed to maintain such a large army,” Daher indicates.

Does Hezbollah have the means to finance this battalion, even if it is backed financially by Iran? “Hezbollah is even more discreet about its finances than its weapons. We don’t know much about it, but paying salaries, feeding and equipping 100,000 men would be way too expensive,” Blandford says.

While secrecy has been one of Hezbollah’s assets, why has it decided to flaunt its strengths now? “It is pretty simple. Hezbollah wants to flex its muscles,” Daher says.

Nasrallah made the declaration following last week’s events in Tayyouneh, when a protest organized by the Hezbollah-Amal Movement tandem devolved into a firefight with men allegedly affiliated with the Lebanese Forces. (The LF has denied involvement.) Seven people, including three Hezbollah members, two Amal figures and two civilians, were killed, and more than 30 were wounded in the altercation, which sparked fears of an escalation that may drag the country into civil war.

Ostensibly, the Shiite party’s chief wanted to reassure his popular base that he is still the most powerful leader on the ground, but also, as he said in Monday’s speech, to scare his foe at home, LF leader Samir Geagea, into “rethinking his calculations.”

Monday was the first time Hassan Nasrallah appeared to lay bare the number of fighters within his party’s ranks.
The Hezbollah leader said on Monday evening that he had 100,000 men under his command, bewildering experts and other observers. As the party is usually discreet about its military capabilities, the Shiite movement’s decision to unveil these data was surprising.
“Hezbollah’s...