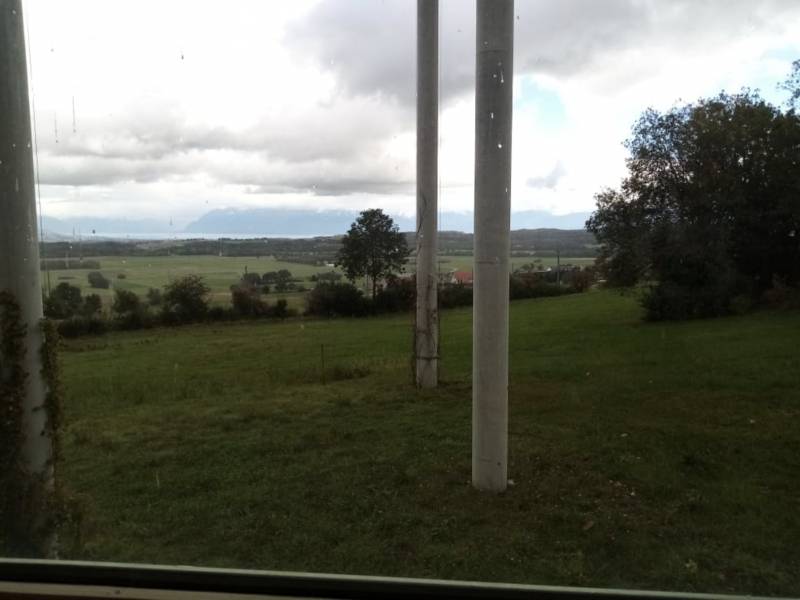 Looking out the window of her cabin in a small Swiss village, Lina Mounzer contemplates how impossible it seems that such a place is just a plane and train ride from Lebanon. (Credit: Lina Mounzer)

It’s been two years since we took to the streets in October 2019, though the distance from that moment can’t really be measured in time. Or maybe it’s that the time feels so distant that a category like “two years” sounds completely meaningless. We have been so transformed by that long and violent fall from the heights of Oct. 17, 2019 that we have our own language now. What makes sense to others is senseless to us; likewise, how we measure and understand things can no longer be translated to those outside this reality in any satisfactory way. And so where those outside this reality might be able to say “two years ago,” and leave it at that, in our language it would be more accurate to say, “two million empty stomachs ago,” or “a stable currency ago”; “an intact city ago”; “a sense of hope and future ago.”

And yet the story of what has become of us over the last two years cannot but begin with, or at least include, those bright, electrifying couple of months at the end of 2019, even if we can no longer credibly apply the world “revolution” to them.

I’ve been thinking a lot about this story — how to tell it, and with what language — ever since I arrived here at this writing residency in a small Swiss village. The massive window of my cabin overlooks a storybook green, cow-speckled valley, with Lake Geneva sparkling and Mont Blanc towering in the distance. That this place is only a plane and then train ride away from Lebanon seems completely impossible. Again, the distance is not something that can be expressed in the usual categories. It would be more believable to say that I’ve stepped through a teleportation device to another planet, or been zapped into a parallel universe by an alien ray-gun.

I am in residence here with a small group of other writers and translators. So far, everyone else is either from Europe or North America, and though there are many, many languages spoken among us, there is no one with whom I can speak this new language that Lebanon has invented for us over the last two years. Thus, to answer all the curious questions I’m getting — some informed, some less so — about the place from which I’ve come, I have to perform a translation far more complicated than any other I’ve ever had to do.

Partly this is because to tell the story of what Beirut is, what Lebanon is, today, to make felt its full impact, I can’t leave out what it once was, nor what it once dreamed it could be. Partly also because the details of everything are so complicated, and the series of events that have taken place so dramatic and extreme that, relayed all together, they can almost sound ridiculous.

I want to say: it’s like being in a dream but I’m not sure which is the dream, the nightmare of Lebanon or the fantasy of this green and untroubled place. I want to say: it feels like the worst kind of betrayal to discover without a doubt that this entire time we’ve been flailing and suffering that there was a whole other world out there, conducting itself more or less normally, and this even despite the disruptions of the pandemic.

I want to describe how, while I waited to board my flight at Beirut airport, there was suddenly a loud bang, and several people screamed, myself included, and how the officials there reassured everyone kindly that it was just a podium that had been knocked over, and how I looked at the woman who’d been sitting next to me and I apologized for overreacting and how she smiled and patted my hand and said, “it’s ok habibti, there’s no one here who isn’t on their last nerve.” And then how, at the train station in Geneva, when an attendant carrying stack of wooden boards dropped them with a mighty clatter, I jumped out of my skin, and then looked around to see that no one had even registered the sound, and how I’d felt so shaky, especially after my long and sleepless flight that I’d pulled my mask up higher so I could cry without anyone noticing, and that’s when I truly realized how far I’d come from home.

“What’s it like being here now?” I’m asked, and I decide that here, I won’t translate. I will instead use the flattened language common to everyone who wishes to deflect and diminish.

I’m being careful. I don’t want to say too much, too soon, because I don’t want my country’s suffering to be mistaken for my personality, for a litany of its miseries to become all I can offer by way of conversation. I also don’t want any kind of attention that might reek of pity. I can stomach nearly any other way of being othered except that which comes through pity.

Above all, however, I want to be able to lay low and blend in as much as I can, so that I can do the work I came here to do. The kind of work I haven’t been able to do since lights across the country, since unexploded Gemmayzeh, since medicine in the pharmacies. I want to be able to take my focus off Lebanon’s immediacy for a while, to try and be in the place I’m physically in now. To look out my window and see rolling green hills and a forest slowly changing into its autumn colors without layering the urban darkness of Beirut on top of it. To remember what it was like to have an imagination not constantly engaged in anticipating the worst, but in projecting toward things outside the narrow confines of the here and now. The kind of imagination I had — that we all had — in October 2019.

Post-script: For all these reasons, I’ve decided I’m taking three months off this column now, so I can better focus on the project I intend to finish here. I’ve found great solace in writing it, and it’s helped me try and make sense of everything we’ve been living over the last tumultuous months. But I’m elsewhere now. Thank you to everyone who has taken the time to read it or to engage with it in any way. It will be back when I’m back in early 2022, in a few months from now. In the meantime, I wish everyone as much health and happiness as can be managed in these difficult times and this difficult place.

It’s been two years since we took to the streets in October 2019, though the distance from that moment can’t really be measured in time. Or maybe it’s that the time feels so distant that a category like “two years” sounds completely meaningless. We have been so transformed by that long and violent fall from the heights of Oct. 17, 2019 that we have our own language now. What makes...