Apartment prices in Beirut in 2021: How much is an apartment in Ras Beirut? 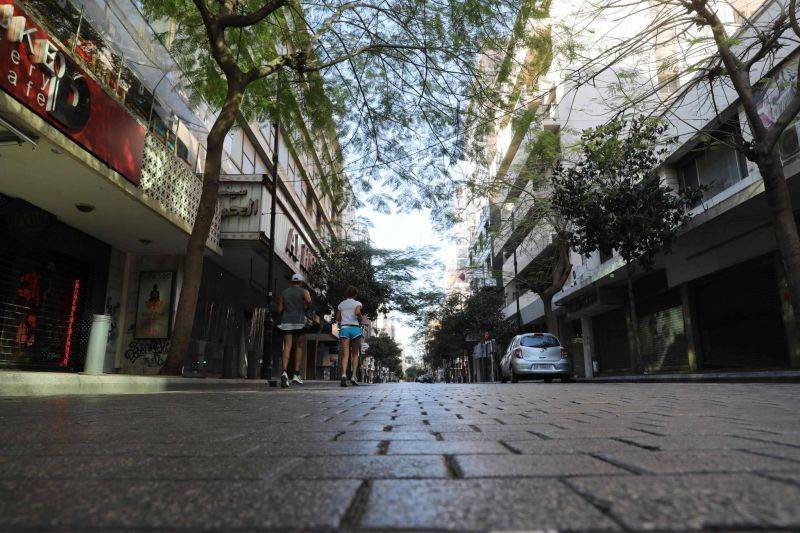 A street in the Hamra area. (Credit: Anwar Amro/AFP)

This is part II of a three-part series on property prices in Beirut. Part I focused on Achrafieh, and the final part will focus on Downtown Beirut.

In Ras Beirut, two major trends prevail. Expats tend to be interested in apartments with a waterfront view, while investors seek smaller properties, such as studios in Hamra.

Most of the apartments listed in the northern part of Hamra can be found mainly along Makhoul, Souraty and Sadat streets. The apartment prices along Makhoul St., just meters from the American University of Beirut campus, range from $2,700 to $3,200* per square meter. In 2019, the same properties cost $3,500–$4,000 per square meter if paid for in banker’s checks, which following the economic crisis’ onset became one of the only ways for Lebanese to access their dollar deposits as commercial banks began implementing informal capital controls.

This disparity has vexed real estate specialists, who deplore a market disrupted by the shift in prices between dollars trapped in the Lebanese banking system and so-called fresh dollars that can be accessed in cash and retain their full market value.

“It proves that owners are lost. They no longer know how to properly determine their property’s value. It doesn’t make sense to ask for [a price] that is 20–30 percent lower when compared with 2019. Prices have fallen by at least 50 percent compared with 2019,” Raja Makarem, the founder of Ramco Real Estate Advisers, says.

“At the end of the day, they have the liberty to ask for the price they want. But the reality is that prices have decreased by half in this area in two years. It is something normal in light of the country’s economic situation,” says Walid Moussa, the CEO of the real estate company PBM.

In the area surrounding the AUB Medical Center, several small spaces are up for sale. The owners target investors looking for a property that could generate 3–4 percent in annual interest if rented. Located in a building dating back to the 1970s, a 40-square-meter studio is priced at $120,000.

“Even though the price per square meter is around $3,000, this type of property attracts people with small budgets. They can advertise them for rent to students or to doctors,” Walid Eido, a real estate agent based in Hamra, says. 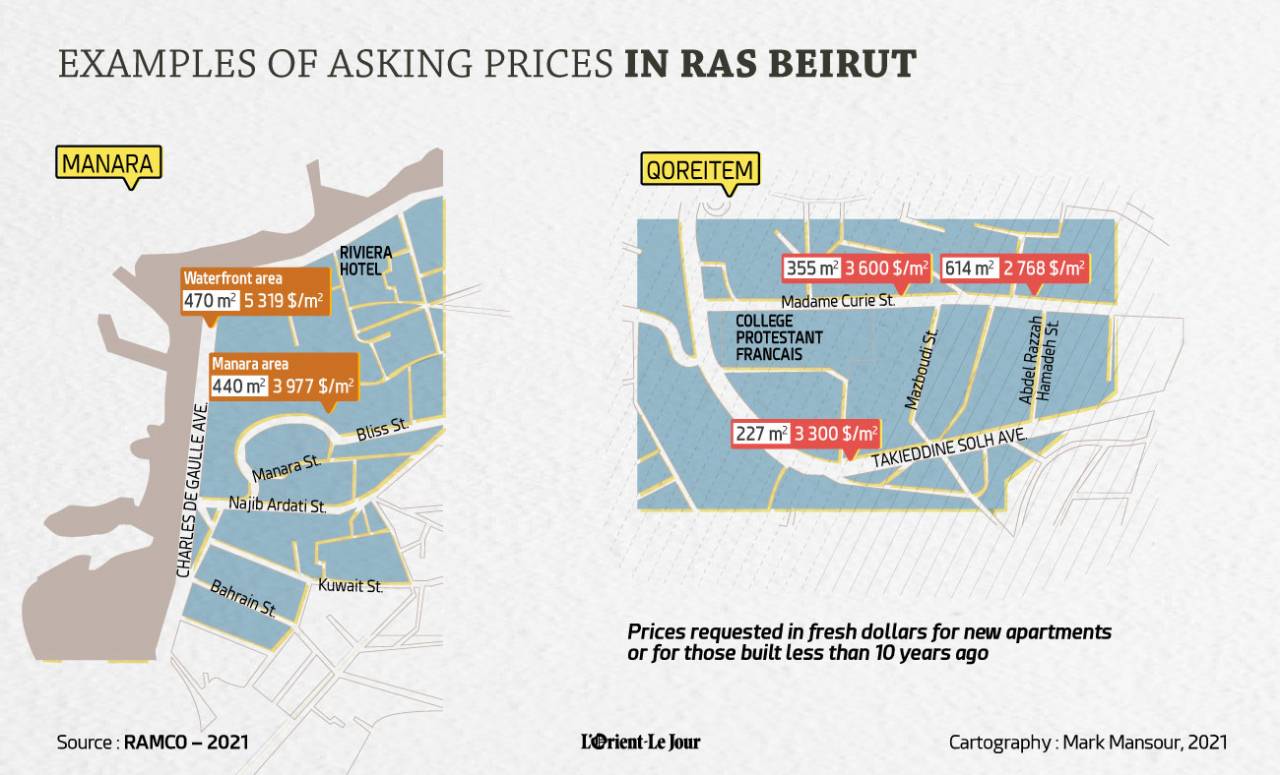 Other, small spaces are available in some Hamra alleyways.

“We are looking to sell an 85-square-meter, two-bedroom apartment at $170,000, or $2,000 per square meter. To date, the best offer made has been $1,750 per square meter,” Makarem says. “The latest transactions in Hamra and Ras Beirut underscore that the value in fresh dollars amounts to just about nearly 50 percent of the old dollar prices,” Eido says.

In Clemenceau, two standard apartments are listed at about $1,900 per square meter. “If the owners are willing to sell them, they will have to adjust the price, similar to this apartment on the second floor,” which cost $2,450 as recently as June, Makarem says.

In Verdun, many apartments in the Verdun Gardens, Vertini and Verdun Heights buildings were sold from late 2019 to late 2020, as promoters took advantage of the financial crisis to sell their property.

There are now very limited offers for listings. Some owners are trying to resell their property, in hopes of finding a buyer who will pay in fresh dollars. The buyer “is often a Lebanese emigrant. He can check out many apartments before he decides; getting a good deal is a priority for him,” Eido adds.

Along Verdun St., a few apartments are offered at a price ranging from $3,000 to $3,300 per square meter. In 2019, there were many sales when the asking price fell within this range. “If the owner is not in debt, he can ask for whatever price he wants. But there won’t be any sales if he asks to be paid in fresh dollars what he asked for in ‘lollars’ a few months ago,” Makarem says.

“There are two new apartments [sized] 250 square meters and 305 square meters, and they are advertised in Verdun at $4,000 and $3,600 per square meter, respectively, which doesn’t make sense,” the agent says.

In Qoreitem, a popular neighborhood, the most expensive properties can be found around the College Protestant Français. On Madame Curie St., two apartments in two separate buildings exemplify the divergence in prices. A 355-square-meter apartment is up for sale at $1,275,000, approximately $3,600 per square meter, and a 600-square-meter apartment is listed for $1.7 million, or $2,833 per square meter.

“Many Lebanese expatriates ask for property along the corniche with a sea view. They actually want to learn about the price and are not necessarily ready to purchase. They hope to find good opportunities, which are very rare,” Makarem explains. 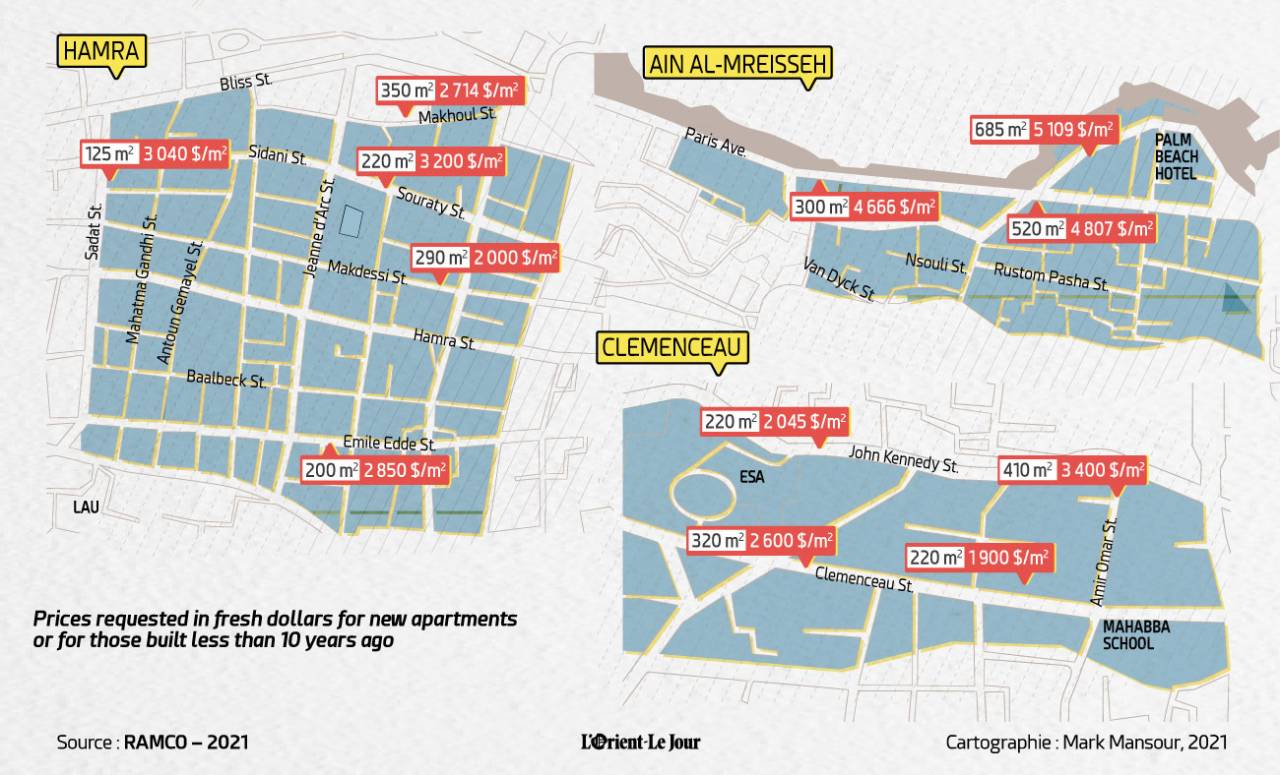 The price of an apartment facing the Mediterranean Sea ranges from $5,000 to $6,000 per square meter. “With few exceptions, the prices are equal to the ones in [banker’s checks] in 2019!” an agent says.

“The owners are mostly wealthy. Some live abroad and are in no rush to sell. They ask too much. Hence, the sales logically do not follow suit,” Eido explains.

*All dollar prices stated in this article are in terms of “fresh dollars,” or dollars that retain their full value on the parallel exchange market.

This is part II of a three-part series on property prices in Beirut. Part I focused on Achrafieh, and the final part will focus on Downtown Beirut. In Ras Beirut, two major trends prevail. Expats tend to be interested in apartments with a waterfront view, while investors seek smaller properties, such as studios in Hamra.Most of the apartments listed in the northern part of Hamra can be...