Apartment prices in Beirut in 2021: How much is an apartment in Achrafieh? 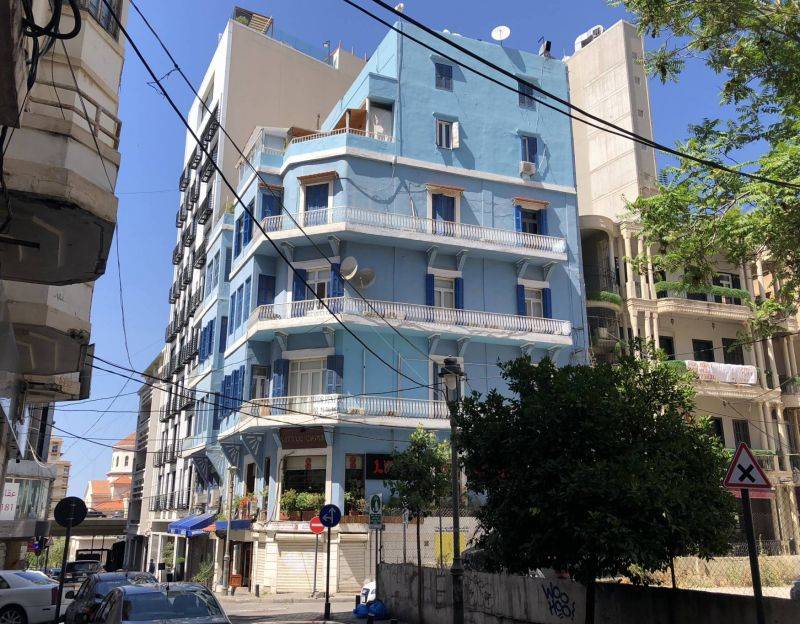 This is part I of a three-part series on property prices in Beirut. The next part will focus on Ras Beirut, while part III will focus on Downtown.

The real estate market in Beirut has changed greatly since the onset of the financial crisis that has gripped Lebanon for two years. In collaboration with Ramco Real Estate Advisers, L’Orient-Le Jour is looking at the different trends, neighborhood by neighborhood, starting with Achrafieh, where the most recent transactions affirm that prices, which are now calculated in fresh dollars, plunged 50 percent compared with 2019 in a market on the decline.

Furn al-Hayek, a beautiful neighborhood in Achrafieh, offers a pleasurable and enviable urban setting with a handful of old boutique buildings, a few gardens and high-end towers. But the [residential] properties put up for sale are not many. One recently concluded sale was a 470 square meter luxury apartment with a terrace, located a few meters away from ABC mall. It was sold for $1.1 million,* or $1,850 per square meter. This price is much lower than the currently typical asking price — for luxury apartments the square meter price often exceeds $3,000. For instance, there are two apartments of 230 and 380 square meters respectively in beautiful buildings, offered at $850,000 and $1.5 million respectively. Their prices are more or less the same as in late 2019.

“Yet the fact that the lira gained value against the US dollar since the formation of Najib Mikati’s cabinet will positively affect the prices. But that’s not going to revive the market in the short run. The market will recover when the Lebanese lira becomes stable against the US dollar,” the real estate agent adds.

“The market will continue to be sluggish. Those who paid with banker checks already made the purchases, and those who have fresh dollars are not many. Things will remain unchanged until Christmas,” says Walid Moussa, president of the Real Estate Syndicate of Lebanon (REAL).

On Trabaud Street, an owner is asking for $1 million for an area of 310 square meters in an elegant building completed in 2017. The price goes up to $1.6 million for a quality apartment of 440-square-meter on Abdel Wahab al-Inglizi Street.

A 490-square-meter apartment near the Sofil Center is looking for a buyer at $2,632 per square meter. On the same street, a 380 square meter property that needs to be restored due to the Beirut port explosion was sold at a rate of $1,840 per square meter.

“Along Sursock Street, a 400 square meter apartment in a 30-year-old building is listed for $2,500 per square meter. In my eyes, it is still a bit high to attract a buyer. Buyers would rather wait. We are still in a situation where no one knows which turn the country is going to take,” Tony Abou Rizk, a real estate agent based in Achrafieh, says. “Indeed, prices in Sursock should range from $2,200 to $2,500 per square meter,” Maatouk says. 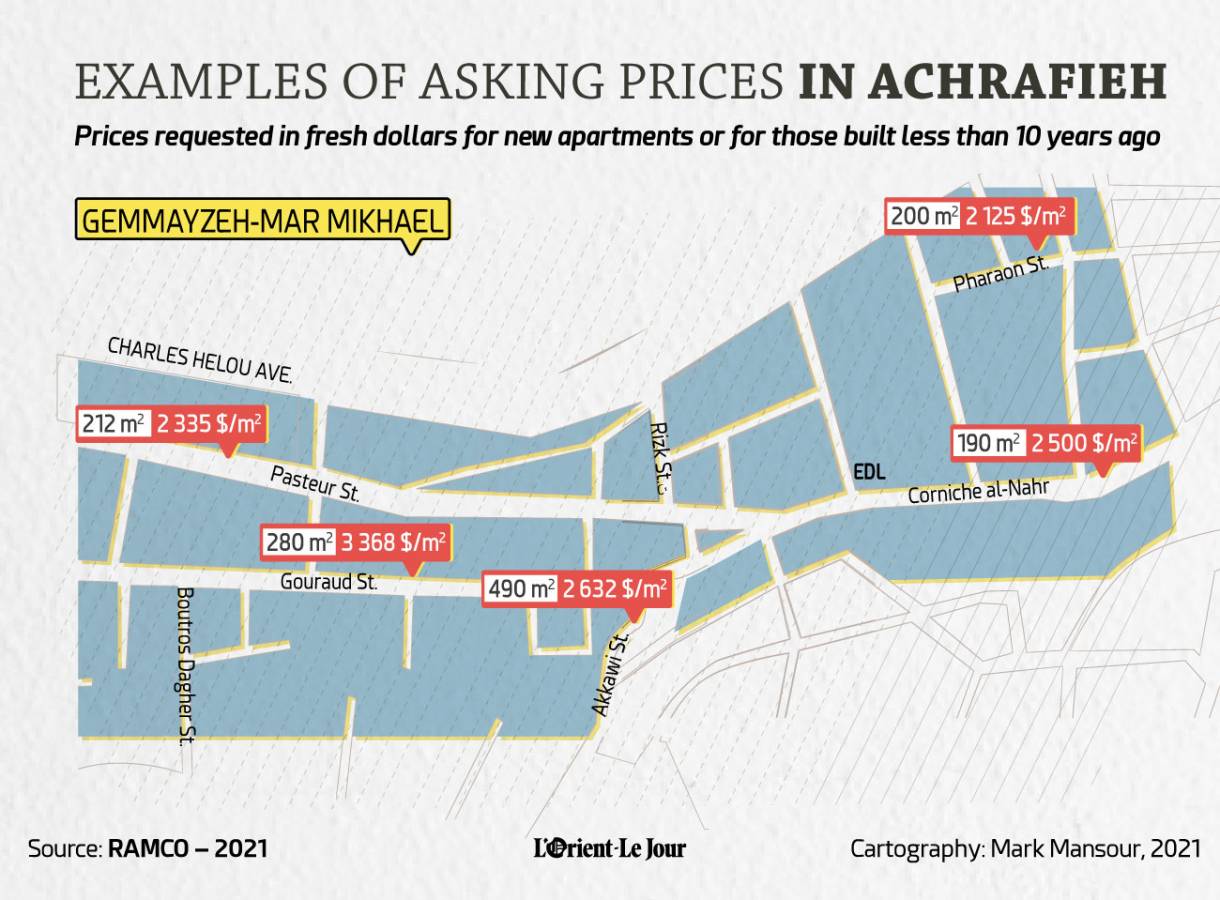 Gemmayzeh and Mar Mikhael are no longer popular

The neighborhoods of Gemmayzeh and Mar Mikhael, which were severely damaged by the Aug. 4, 2020, explosion are no longer as popular as before. A year ago, real estate transactions were controlled there, with the Culture Ministry’s approval needed for a sale to take place, which slowed down potential buyers. The authorities suspended the sales between individuals until late 2022, which explains why transactions were very rare in the past 13 months.

“It is an unjust decision. It is tantamount to a violation of the right to property,” Moussa says. Properties under construction and registered under a company name are the only ones that can be sold.

“In Mar Mikhael, a fully renovated apartment in a new building following the 2020 explosion can hardly find a buyer at a rate of $2,500 per square meter. The Aug. 4 [blast] curbed the demand,” Abou Rizk adds.

“It is impossible to sell at these prices. These values are incorrect,” Raja Makarem, the founder of RAMCO, says. Real estate professionals point to other inconsistencies. A two-bedroom apartment in the Nazareth school neighborhood is on the market at $3,300 per square meter, down from $3,800 in 2019. In the Saint-Louis neighborhood, an apartment priced at $3,200 per square meter in June 2019 is now for sale at $2,950 per square meter.

Located between several expressways, the Corniche al-Nahr neighborhood experienced a particularly active year in 2020. The promoters of the Achrafieh 4748, Factory Loft, Urban Dreams and Factory 4376 projects that have dozens of unsold real estate units, sold their properties through bankers’ checks.

Today, some investors seek to resell their properties. The highest values are found in the atypical buildings designed by the architect Bernard Khoury. A 160-square-meter apartment on the third floor is advertised at $370,000. People who have $1 million can purchase a 350-square-meter duplex in excellent condition.

Factory Loft building sells at a cost ranging from $1,800 to $3,200 per square meter. “This demonstrates that owners no longer comply with market logic. They put the price that comes to their minds without knowing if it is consistent or not,” Makarem says. 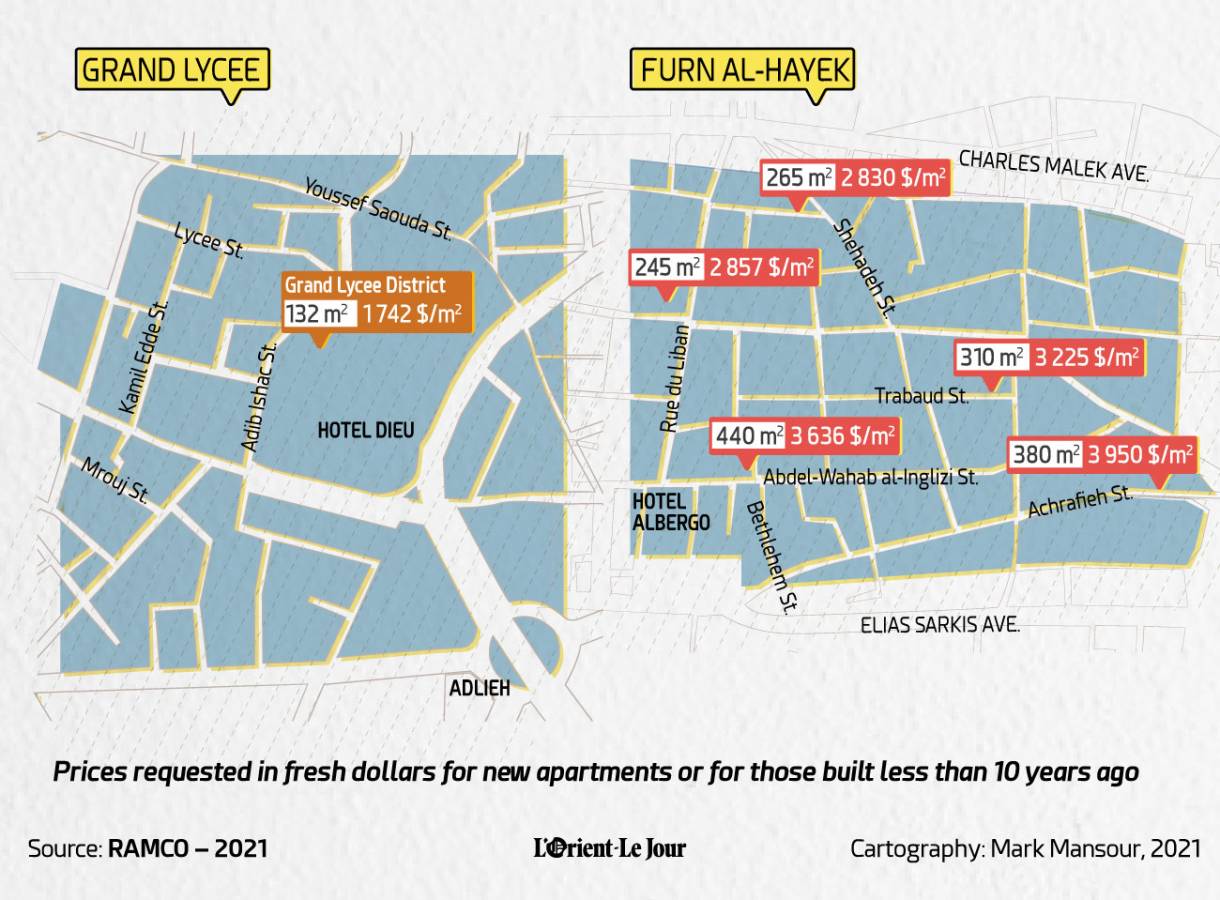 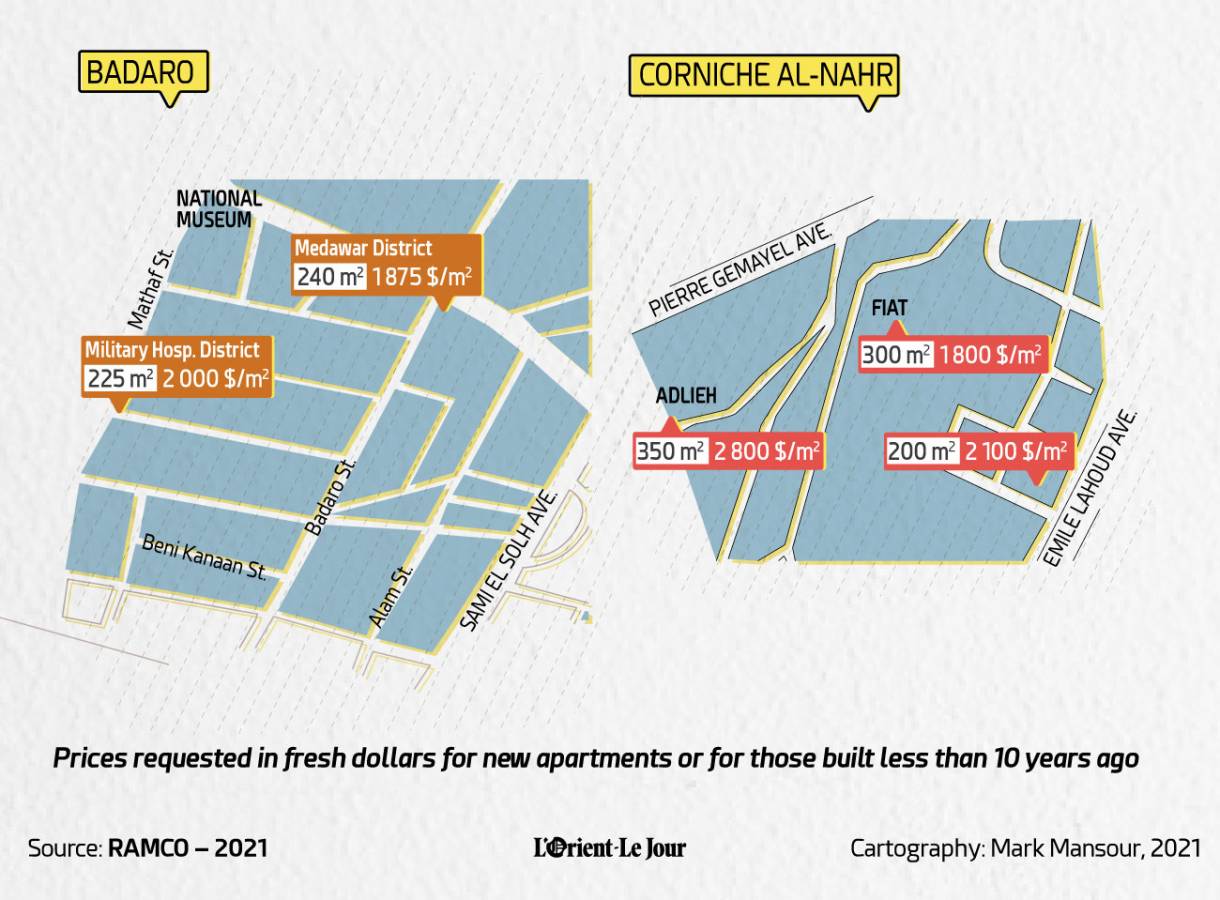 The high number of coffee shops and restaurants along Badaro Street has boosted the reputation of this Beirut neighborhood. This street is still cheap as it offers the chance to buy at around $2,000 per square meter, or even less, such as this 240-square-meter apartment advertised for $650,000. This same property was for sale at 850,000 lollars in 2019. In the neighborhood around the military hospital, the value of 225 square meter apartments varies from $450,000 to $500,000 depending on what floor the property is on.

*All dollar prices stated in this article are in terms of “fresh dollars,” or dollars that retain their full value on the parallel exchange market.

This is part I of a three-part series on property prices in Beirut. The next part will focus on Ras Beirut, while part III will focus on Downtown.The real estate market in Beirut has changed greatly since the onset of the financial crisis that has gripped Lebanon for two years. In collaboration with Ramco Real Estate Advisers, L’Orient-Le Jour is looking at the different trends,...