Here’s what happened yesterday and what to expect today, Tuesday, Oct. 5 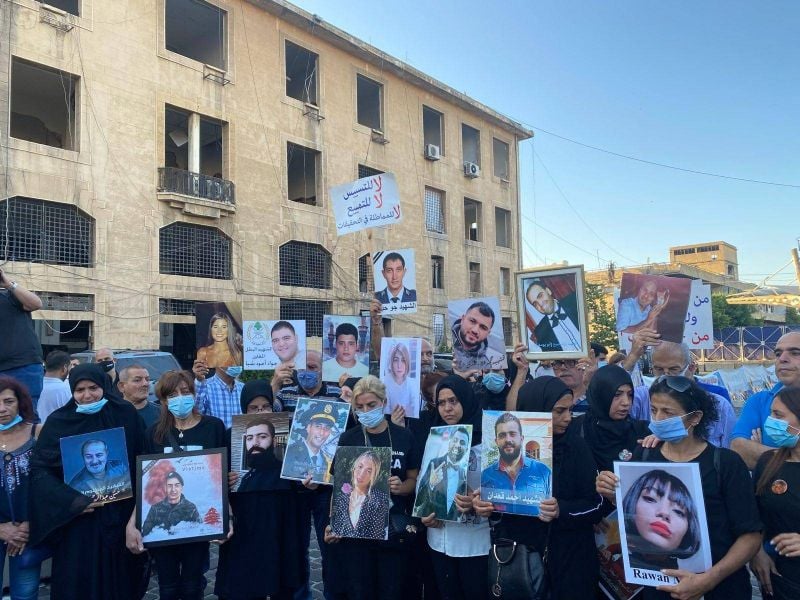 Families of those killed in the Beirut port explosion gather for their monthly vigil in Beirut on Oct. 4, 2021. (Credit: Tala Ramadan/L'Orient Today)

The Beirut port blast probe can resume after the Beirut Court of Appeals rejected lawsuits from three MPs who requested head Judge Tarek Bitar’s dismissal. Former Finance Minister Ali Hassan Khalil (Amal/Marjayoun-Hasbaya), former Public Works Minister Ghazi Zeaiter (Amal/Baalbeck-Hermel) and former Interior Minister Nohad Machnouk (Future/West Beirut) — who are all sitting MPs — had alleged negligence and maladministration on Bitar’s part. However, the court tossed out the case yesterday, ruling that it lacked jurisdiction over the matter and fining the three MPs LL800,000 each because, according to Legal Agenda, the complaints contained “arbitrary” claims. Last week, when the investigation was temporarily halted until the complaints were adjudicated, legal experts had said the claims were a frivolous attempt to stall the investigation until the MPs regain legal immunity on Oct. 19, when Parliament enters a regular session. The court’s decision came on the 14-month anniversary of the blast, and several families of the explosion’s victims gathered for a vigil, expressing their support for Bitar’s probe. “All Lebanese should make the investigation a national [priority so that] ... authorities” are not “able to avoid any serious consequences when it comes to the blood of our children,” the families said in a statement issued Monday evening.

Healthcare services at two prominent governmental hospitals have been scaled back to almost a bare minimum due to employee strikes. At Rafik Hariri University Hospital in Jnah, the leading public hospital in combating COVID-19, outpatient services, admissions and laboratory services were halted due to a strike by nurses and other staff, who demanded a three-month salary advance, 30 percent of their payments in so-called fresh US dollars and payment for overtime worked. Meanwhile, Saida Governmental Hospital employees continued a strike yesterday in front of the hospital’s emergency entrance, the NNA reported. The employees had already been striking for five days, receiving only patients with life-threatening cases. They demanded grants for their children’s schooling, a salary increase and higher transportation allowances to account for increases in gasoline prices.

Demonstrators gathered yesterday outside General Security’s Beirut headquarters to support the director Awad Awad, who was summoned for an investigation over a play that was canceled over the weekend under murky circumstances. The director was summoned after General Security prevented the closing performance of his production “Tenfiseh” from going forward. According to the security agency and Nidal Al Achkar, the director of Masrah al-Madina, where the play was to be performed, the play was supposedly suspended because the theater hadn’t obtained the proper permit to stage it. Others alleged that General Security was motivated by censorship, because earlier performances reportedly contained language considered insulting to President Michel Aoun. When Awad left his interrogation yesterday, he said he intends to get a permit and ensure the play is performed soon.

A Beirut-born scientist is a co-recipient of the 2021 Nobel Prize for Medicine. Ardem Patapoutian, a professor at the Scripps Research Institute in California, who is a US citizen of Lebanese-Armenian descent and an alumnus of the American University of Beirut, received the prize alongside an American named David Julias for his work on the nervous system’s role in helping our body perceive temperature and touch stimuli. Speaking after being notified of his award, Patapoutian said, “In science many times it’s the things that we take for granted that are of high interest. … One of the exciting things about [the discovery] is that it’s taking us into directions and places where we didn’t know that pressure sensing was important, and that’s one of the exciting things in the future.”

With the start of the academic year for public schools in doubt, Parliament’s Education and Culture Committee is set to meet this morning at 10:30. The start date, originally set for Sept. 27, was later pushed back to Oct. 11, but it remains unclear whether education officials will be able to resolve the issues that led to the delay, including threatened teacher strikes. Education Ministry officials are in negotiations with teachers over mitigating the effects of the crisis on their salaries and transportation costs. Most private schools have begun teaching, our sister publication L’Orient-Le Jour reports.