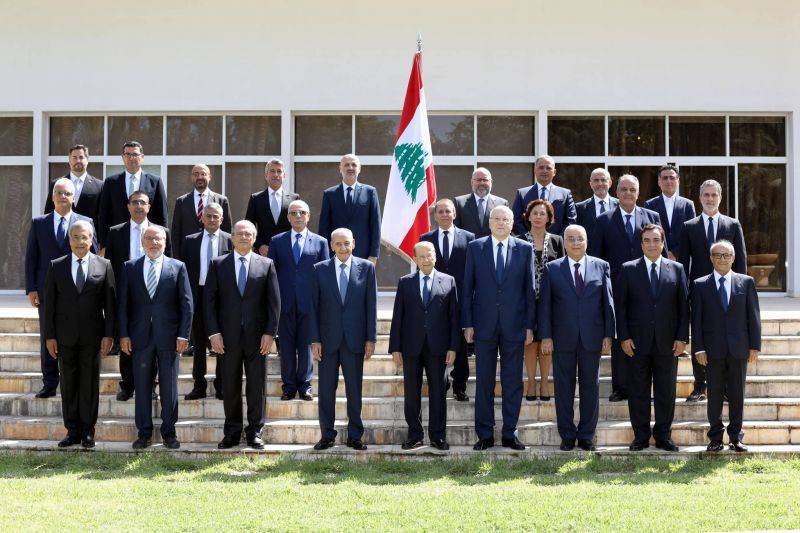 In a consociational system marked by sharp political differences, the emergence of independent voices is almost impossible.

“A government, any government”: that was the French position on the Najib Mikati cabinet, which was announced on Sept. 10, ending 13 months of political deadlock, according to a former minister, who requested anonymity.

It is no surprise that the government mirrors the traditional logic of power sharing through sectarian and partisan quotas, and lacks a program that could lead to the success of its primary mission: pulling the country out of its worst economic crisis in decades.

We are nowhere near “the French road map” of Sept. 1, 2020, which recommended that political leaders form a “mission-oriented government” consisting of the “competent figures” within 15 days. We are also nowhere near meeting demands for an independent technocratic government that were voiced in the country’s public squares during the Oct. 17, 2019 uprising.

Paris was of course eventually forced to lower its ambitions to reconcile them with the Lebanese realities, especially in light of the country’s political caste, which has no intention of allowing independent figures to hold the reins of power.

“Macron ended up shifting from a mission-oriented independent government to a government negotiated with [Iranian President Ebrahim] Raisi. The most important thing for Paris, which attempts to fill the American void in the region, was to form a government,” the former minister adds.

Once again, the realities on the ground have had the upper hand. There is no place for technocrats in a volatile situation where parties fight for political survival, especially when would-be independent technocrats move to free themselves from the political patrons on whom their nomination depended.

“When I was named interior minister in 2008, the situation required that an independent figure fill this seat, as the May 7 events had recently taken place,” says Ziad Baroud, who is also close to civil society. Shortly before Baroud’s appointment, Hezbollah had taken over areas of Beirut following the Fouad Sinora government’s attempt to dismantle the armed Shiite movement’s parallel telecommunications network.

“Being independent does not mean being neutral, but rather standing at an equal distance from the traditional parties,” he adds.

However, the situation in 2021 is not the same as it was in 2008. The country has been devastated by an economic and social crisis, and the political class wants to preserve influence over the government.

“Today the political caste wants to join the economic recovery efforts in the country. International pressure requires this government to prioritize holding elections, ending fuel and medicine shortages, finishing the ration card and resuming negotiations with the International Monetary Fund.

“However, when it comes to bringing about painful reforms, the political figures do not wish to be, or cannot be, at the forefront. With this in mind, it is better to have a ‘dummy’ government,” Baroud says.

The traditional political parties wish to be regarded as the ones who will have saved the country, while hiding behind the “technocrats” who will conduct the painful reforms necessary for the rescue, including significantly reducing the number of public sector employees and ending subsidies.

There are certainly ministers recognized for their competence in their fields in the new cabinet. But they don’t hold real power. Even the most determined ministers among them risk being held hostage by a political system that is allergic to reform.

“The government exercises a nominal power over secondary files. The real political power in Lebanon is in the hands of a band of six or seven traditional leaders, whose decisions are substantiated only by their sectarian interests and cronyism,” the former minister says.

“They will not allow any reform to be carried out if it runs counter to these interests,” he adds.

This political caste meddles even in the smallest administrative details.

“When I was minister, we were able to pay out small year-end bonuses to civil servants who deserved them. Although it was a small sum, I received around 50 calls from politicians to influence my choice. When I did not comply, I found myself the victim of a campaign by media outlets close to some political parties,” the former minister says.

Mansour Bteich, a former economy minister close to the Free Patriotic Movement, who was in Saad Hariri’s third government, underscores that it is impossible to carry out reforms due to the nature of the political system and institutions. At the end of its term in 2019, Hariri’s third cabinet was studying the competition law, which is designed to “truly liberalize the very oligopolistic Lebanese economy.”

But the ministers’ efforts were to no avail. The reform was hampered by the logic of sectarianism. “The argument put forward against this draft law is that most of the importers are Christians, which means that the draft would be a hindrance to Christians’ rights. In the end, then-Prime Minister Saad Hariri shelved the draft law until the Hezbollah bloc members of Parliament expressed interest in it,” he recounts.

“A consensus among all sectarian groups is required in order to pass the smallest reform,” he says.

The most recent example of politics getting the upper hand on would-be technocrats was the government of Hassan Diab. Diab’s cabinet was fought by the March 14 coalition forces, which decided to be the opposition from the beginning, and was paralyzed mostly due to disputes between the Free Patriotic Movement and the Amal Movement. Politics trumped any ambitions harbored by Diab’s cabinet, due in part to the context in which the cabinet was formed.

Hailing from reformist circles, former Justice Minister Marie-Claude Najm was among those who paid the price.

“The system is not limited to the political class. It also involves the private sector, the media, public opinion,” she says. “During my tenure, I often had to struggle solo. I was classified from the outset as FPM, even though I am an independent. President Aoun and [FPM leader] Mr. [Gebran] Bassil did not even know me before. If the president, in agreement with the prime minister, appointed the majority of Christian ministers, it does not mean that I am a partisan. I have always had full political independence.

“Hassan Diab was the one who insisted on appointing six female ministers, which he called the female guaranteeing third at the time, when he was pleading for a cabinet lineup of 18 ministers,” the former minister says.

She adds that many of her positions dismayed the political establishment, including her position on lifting bank secrecy and delegating legislative powers to the government. “As long as this sectarian system persists, no government will be able to provide real solutions or address core issues. I’m telling you this from my personal experience,” she says.

Former Finance Minister Ghazi Wazni, who is close to the Amal Movement, is another example of how technocrats are powerless in the face of politics. He says he had to stand against the capital control law although he was one of its advocates, because “my political backer,” the Amal head Parliament Speaker Nabih Berri, was against it.

Being an independent and technocratic minister does not mean that you are inactive. “During my tenure as interior minister, I allowed the Lebanese wishing to remove references to their religion from their civil registry records to do so. I also organized the 2009 elections, which were held in one day. The best response to obstruction is hard work and pushing for your project,” Baroud says.

Pressure can also be exerted behind the scenes. “During my tenure, riots broke out in the Roumieh prison,” which was the interior minister’s responsibility. “Back then, I thought it was an impulsive action. Looking back at it, I realized that it was a political manipulation [to distract from my work], of which the inmates were the pawns,” he says.

Paralysis is not the only hurdle. The problem is deeper: is a government of technocrats the solution in a country where political differences are so prevalent?

Hezbollah Secretary-General Hassan Nasrallah has said that the challenges awaiting the government are so arduous that it necessitates a political or techno-political government to be able to absorb the popular shock. “At the end of the day, there aren’t really any independents in Lebanon,” he said.

Henri Chaoul, a former economic adviser to the government, who was tasked with negotiating with the IMF, believes that the mission rather requires a government that implements a “public policy,” not a “political policy.” “Several opposition movements that emanated from the thawra [“revolution”] can themselves lead the economic recovery period,” he says.

This is true especially because the task involves a clash with economic interests close to the system. “Look at Hassan Diab’s economic plan. This is the first time that Lebanon recognizes the numbers and losses. But in the end, the plan was opposed by major economic and financial interests, including the banks and monopolizers,” he says.

Chaoul says he thinks the new cabinet involves people who are competent but seem to be children of the system. “The first thing that the new finance minister” — Youssef Khalil, a former financial operations director at BDL — “must do is work toward dismissing [BDL Gov.] Riad Salameh. He will be dismissing a boss he had for more than 10 years,” he says.

In a consociational system marked by sharp political differences, the emergence of independent voices is almost impossible.“A government, any government”: that was the French position on the Najib Mikati cabinet, which was announced on Sept. 10, ending 13 months of political deadlock, according to a former minister, who requested anonymity.It is no surprise that the government mirrors the...