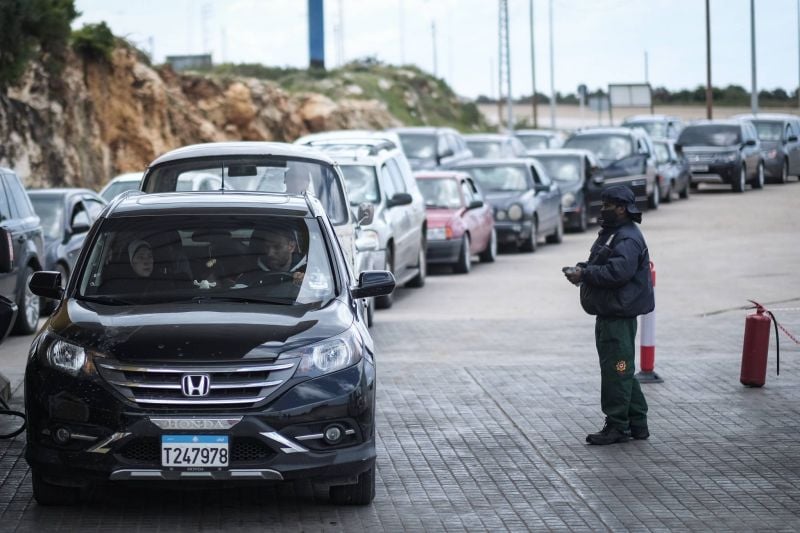 Cars queue in front of a gas station in Lebanon amid shortages. (Credit: João Sousa/L’Orient Today)

BEIRUT — Ibrahim al-Masri wipes sweat from his brow as he queues behind two dozen other cars outside a Beirut gas station. It could take hours to replenish his depleted tank — but with no spare cash to bribe the pump attendant, all he can do is wait.

As Lebanon’s deepening economic crisis causes shortages of basic goods including fuel, medicine and even bread, a privileged few are finding ways to beat the queues and rationing by wielding personal connections, or wads of banknotes.

“I can’t afford that,” he said, adding that a bribe of that size was equivalent to a day’s wages for him.

Even before its economy collapsed, Lebanon had one of the world’s most unequal wealth distributions. In 2019, the richest 10 percent owned 70 percent of the country’s personal wealth, according to the UN Economic and Social Commission for Western Asia.

At the time, 42 percent of households in Lebanon suffered from “multidimensional poverty,” meaning they were deprived of at least one essential service such as health care, electricity or shelter, according to ESCWA.

Two years since the financial crisis erupted, that number has doubled to 82 percent, the body said this month.

In Beirut and its suburbs, residents said accessing basic goods and services now depends increasingly on having foreign currency, personal connections or knowing incoming travelers who can bring in necessities.

“It’s a tectonic shift in every facet of life in Lebanon,” said Nasser Yassin, a professor at the American University of Beirut and head of the Crisis Observatory, which tracks the impact of Lebanon’s financial collapse.

The “haves” include Lebanese people working for embassies, multinational companies and international aid agencies, whose foreign currency earnings have been shielded from the loss of more than 90 percent of the lira’s value since 2019.

They can still afford to go grocery shopping, eat out at restaurants, pay for their children’s schooling and even travel — in stark contrast to the new “have nots” of Lebanon’s middle class, who get paid in lira.

“The increasingly small percentage of the population who have access to foreign currency are much better off now,” Yassin said.

Basic goods are being sold on “parallel markets” he said, allowing people to bypass long lines for a rationed product if they are willing to pay more.

Some buy black market fuel out of plastic containers at multiple times the official price, while others pay someone else to wait in their car for them at the fuel station.

Chadia Akiki, a 48-year-old who lives north of the capital, said some bakeries had started selling “black market bread” at LL10,000 per bag — more than double the maximum price set by the state.

Like Masri at the gas station, she said she could not pay a premium.

“I had to wait in line behind 20 people at the regular bakery to buy it at the normal price, and they wouldn’t let me buy more than one bag,” she told the Thomson Reuters Foundation.

But as some goods become more difficult to find, not even cash is enough.

“Personal contacts work better than money these days,” said Chadi Chahla, an information technology officer who lives in northern Lebanon and drives 90 km to his office in Beirut every day.

Family friends and other connections have helped him buy plastic tanks of gasoline on the black market, though he has still run out of gas three times on the highway.

Other motorists have managed to fill up their vehicles after friends with connections at nearby fuel stations alerted them that the pumps were about to open.

As pharmaceutical stocks run low too, contacts are often the only way to get hold of urgently needed supplies.

Hassan, an e-commerce entrepreneur from southern Lebanon who asked not to give his full name, said his expatriate connections had proved a lifeline.

“We were struggling for six months to find hormonal medications for my mom, who is recovering from cancer, until we found people coming from outside Lebanon who could bring them,” he said.

Grassroots initiatives have popped up on Instagram to link incoming travelers with patients looking for medications unavailable in Lebanon – from anti-depressants to painkillers and chemotherapy drugs.

But despite having scraped by so far, Hassan said he was bracing for tougher times ahead.

“I don’t have the privilege or the connections to have someone regularly bring me medication, or diesel for the power generators, or gas for my car,” he said.

“Every time we say it can’t get worse, it does. There’s no rock bottom.”

BEIRUT — Ibrahim
al-Masri wipes sweat from his brow as he queues behind two dozen
other cars outside a Beirut gas station. It could take hours to
replenish his depleted tank — but with no spare cash to bribe
the pump attendant, all he can do is wait.
As Lebanon’s deepening economic crisis causes shortages of
basic goods including fuel, medicine and...