“To everyone who is hiding and protecting the criminals, the streets will blow up in their faces,” one protester said. 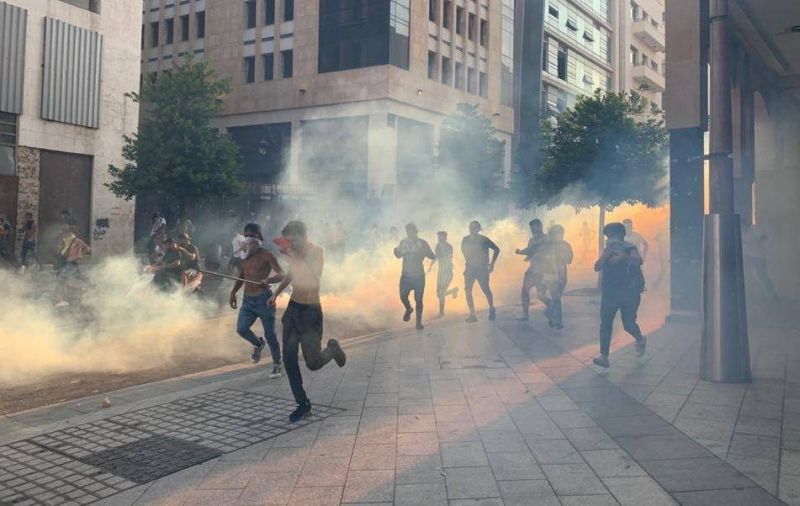 BEIRUT — One year on from the port explosion that killed 218 people, anger boiled over as thousands of protesters demanding accountability for the blast faced off against security forces in downtown Beirut.

“Our goal is to storm the Parliament,” a student said, as security personnel in the capital — once again — defended the headquarters of Lebanon’s legislature with volleys of tear gas.

Following an afternoon of marches across the city, protesters on Wednesday evening moved onward from the port, the site of last year’s explosion, to downtown Beirut — the seat of a Parliament yet to facilitate the investigation into the crime — demanding the removal of legal immunity from government officials.

The thousands were undeterred by earlier clashes between security forces and a small group of protesters who tried to breach a barricaded entrance outside Parliament. Security forces had deployed tear gas and water cannons to try to disperse the small crowd, all as a larger group of demonstrators prepared to take their protests to downtown.

As the night went on, riot police forced the crowds out of the downtown area, firing tear gas deep into the lines of the mostly peaceful protesters. Those remaining gathered at the entrances of the nearby Gemmayzeh neighborhood, along the Ring Road — a now-iconic site of past protests — and at the highway near the port.

Meanwhile, a group of protesters stormed the headquarters of Électricité du Liban in Mar Mikhael, prompting the Internal Security Force’s riot police as well as the army to intervene to clear the building.

Security forces arrested a number of the protesters, Lebanon’s state news reported, adding that they were working to force out anyone remaining. Some demonstrators gathered outside amid a heavy security presence.

Lebanese Red Cross announced that it transported 10 wounded people from downtown to hospitals, while 71 others were treated on site.

Under Lebanese law, high-ranking members of the government as well as lawyers and others are unable to be prosecuted without special permission. The Beirut and Tripoli Bar associations recently granted their permission for Investigative Judge Tarek Bitar to prosecute certain of their members, but the Parliament has not acted to lift immunity from three sitting MPs whom Bitar seeks to prosecute.

“We are coming here to demand the continuation of the investigation ... to reach the truth, no matter what it costs,” said Wassim Hamadeh, the brother-in-law of one of the victims of the Aug. 4, 2020, explosion.

Days earlier, families of victims of the Aug. 4 explosion demanded authorities strip immunity from officials, an entreaty met with words but no actions. A spokesperson for the group warned Tuesday that they would escalate measures to be “more confrontational.”

“Every day is Aug. 4, and we won’t rest until we bring them all to justice. All of them,” vowed Mustapha al-Sobh, whose son Ziad died from wounds suffered in the explosion.

Some of the protesters came individually Wednesday, responding to weeks of calls for organized action in downtown Beirut. Others came in groups, donning professional uniforms, with doctors marching in white lab coats and judges in black robes.

Retired Brig. Gen. Joseph Asmar spoke on behalf of a group of retired soldiers, telling L’Orient Today, “We came down to the streets for justice, the independence of the judiciary and the discovery of the truth.”

Contingents, such as one from the Secular Club at the American University of Beirut, carried signs linking today’s protests to the uprising that began on Oct. 17, 2019, which targeted the country’s political elite. “Our message is: To everyone who is hiding and protecting the criminals, the streets will blow up in their faces,” said Jad Hani, a leader in the club.

Mohammad Adib Halabi, from the Social, Economic and Political Forum, which includes members from Beirut, Tripoli, Akkar and Saida, said the group came to call for justice and the lifting of immunities.

“From the beginning of the Oct. 17 revolution our demands have been the same,” he said. “[We want] the end of the corrupt militia system that rules Lebanon, and we cannot have a state where illegal weapons exist.”

Some protesters chanted slogans calling Hezbollah a terrorist group and decrying “Iranian occupation.” Amid the hodgepodge of groups, a small-scale fight broke out.

The fight erupted in the Gemmayzeh quarter, just south of the port, in the afternoon between supporters of the Communist Party and the Lebanese Forces, two parties on diametric opposite ends of the political spectrum. The army quickly intervened to quell the clash.

Earlier in the afternoon, the army posted a series of photos of assault rifles, grenades and walkie-talkies to Twitter, claiming that they had been confiscated from a number of young men allegedly headed to the protests in Beirut.

An earlier version of one of the photos included a vest bearing an Amal Movement logo. An army spokesperson told L’Orient Today that the items had been confiscated at checkpoints in various regions of Lebanon en route to demonstrations in Beirut, but declined to specify where the weapons were intercepted.

BEIRUT — One year on from the port explosion that killed 218 people, anger boiled over as thousands of protesters demanding accountability for the blast faced off against security forces in downtown Beirut.“Our goal is to storm the Parliament,” a student said, as security personnel in the capital — once again — defended the headquarters of Lebanon’s legislature with volleys of tear...