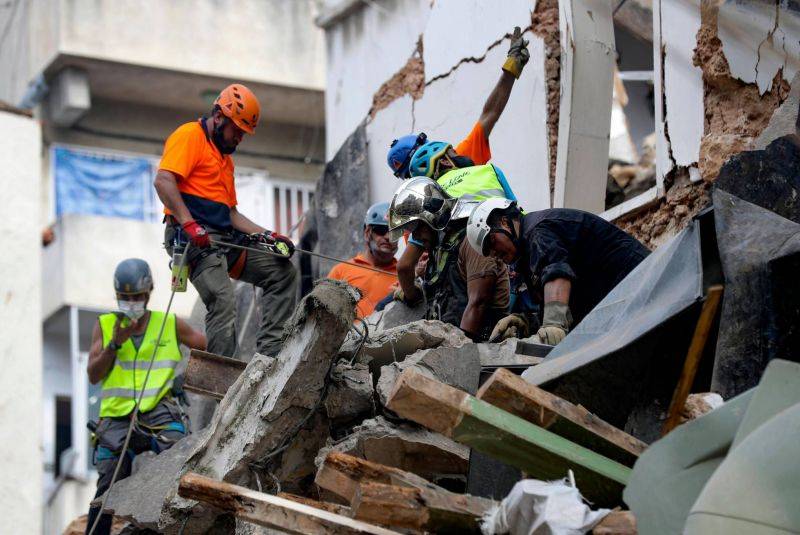 I’ve known for a long time of course that this column was coming; that August’s submission already had its subject ready and waiting. I would just have to write it. I never really thought about what I would write. I assumed that when the time came I would have something to say. But I still don’t really know what to say, especially not to the people I think of as the primary readers here at L’Orient Today, my fellow Lebanese near and far. What can I tell you about Aug. 4 that you don’t already know? That you haven’t already lived, that you aren’t living still? We all know that as time has passed for the rest of the world, we have remained here, stuck in place, caught on the poisoned spike of this day now for a whole year, unable to move on.

I don’t even know what voice to write in when I write to you about the blast. Most of the things I’ve written about it so far have been for foreign publications, and so naturally I’ve used the first-person plural. Talking to people outside, trying to describe what happened here, trying to get them to listen, my main focus was always on relaying what exactly happened to “us.” Its gravity, its horror, its size. And so I’d write: Our city exploded. Our leaders are responsible. We have lost parents, children, friends.

I used that voice also to draw strength from the numbers contained in that “we.” To gather a crowd of “us” together, so we could stand against the “them” who did this. And so I’d write: Our city exploded. Our leaders, they are responsible. We demand justice. We demand accountability.

“Look at the size of this cataclysm,” I’d say to the foreign readers. “The number of us it shattered. This is the us to whom they owe justice. This is the us who will never be the same again.”

In each of these pieces I’d recount, again and again, a tally of our losses, tangible and intangible. The number of dead and wounded. The number made homeless, the neighborhoods and houses destroyed, the psychological toll, the way we are now always angry, always afraid. “Look,” I’d say. “Look at our pain. Isn’t it huge? Aren’t our victims many and innocent? Don’t they deserve attention and empathy and justice?”

But now I am writing directly to you, and I wouldn’t dream of inviting you to look, again, at this pain. You live it every day. It is in your houses and your bodies. It sits down to dinner with you every night and then follows you into your dreams. Useless to ask you to look at it when I know that it is anyway the first thing you see, when I know how it distorts the shape and taste and texture of your daily lives.

And I have to confess to you also that sometimes I feel a bit dishonest using the “we.” Because everyone’s losses were different. “We” lost houses and yet “I” did not. “We” lost parents and children; “I” did not. I confess this not to “check my privilege” or out of any other self-righteous motivation to police the borders of who is allowed to speak of pain and who not. But because I think it’s important how we speak of pain, that we are precise about the specifics of suffering. That we don’t fall into the trap of sentimentality, making grandiose declarations of agony in which the everyday minutia of different kinds of pain becomes subsumed and lost. I do not doubt or belittle the depths of my trauma. I physically feel the earth shake at least once a day and have taught myself to look at a fixed object to convince my panicking mind that the world isn’t actually moving in a precursor to another explosion. But my stakes are different. The emotional, psychological, and financial burdens the explosion has placed on my shoulders are not nearly the same as someone who lost their child, their sight, their house.

The other reason I am hesitant about using the “we” with you is because within our local context, it’s clear how divided we are. We have been arguing heatedly about the films that have been made about the explosion, the songs that have been written, the products and statues made of its debris, the right way to go about seeking accountability, to spend this anniversary. Should people even be making art about this? Selling anything? Holding lectures? Why are “they” turning this into a commodity, a carnival? “We” feel this is unacceptable. This is our collective trauma, yes, and yet we each have our own ideas about how to process its intimate grief. Who therefore owns the collective grief? Who has the right to distill it, to make something of it, to speak in its first person plural voice? What does it even mean if people like Gebran Bassil, like Hassan Diab, can adopt the agonized “we” of the Lebanese people? If the murderers and those protecting them can so easily slip into and hide themselves among the “we” of the victims?

I am therefore glad that in writing this here I can unburden myself of the weight of this we and speak directly to you. And as I look back on Aug. 4, what I want to remember with all of you is not the day itself, but what happened one month later, when a rescue team from Chile announced that they had detected a heartbeat beneath the rubble in Gemmayzeh. For 48 hours everyone waited with baited breath, a silent crowd of shell-shocked people gathered on that ruined, dusty, sweltering street, as teams of volunteers carefully removed the rock and debris to identify the source of the heartbeat. Speculation ran rampant as to who might be down there. There were two people, then there was one. Perhaps a mother and child. Perhaps only a child. Perhaps one had died and the other had lived on, waiting alone in the dark for a month. The authorities did nothing to help, of course, even though time was of the essence, fast running out. A civilian volunteer had to organize a digger to help move the heavy stone.

And everyone waited and waited, all the Lebanese watching across the world, breath held, trying to remain as silent as possible so as not to interfere with the readings of the machine. Hope and horror mingled: could it be that someone was still alive down there? That among all this death, there was yet a life to be saved? But if someone — a child — had really been down there alone for an entire month, how would they emerge? What sort of a life would even be possible for them still?

In the end there was nothing. No heartbeat, no survivor, no unexpected miracle. Not even the smallest closure to all the horror we’d endured. There had only been all of us together, hoping and not daring to hope, the pounding of all our grieving hearts the thing that had been mistaken for a sign of life.

I’ve known for a long time of course that this column was coming; that August’s submission already had its subject ready and waiting. I would just have to write it. I never really thought about what I would write. I assumed that when the time came I would have something to say. But I still don’t really know what to say, especially not to the people I think of as the primary readers here at...