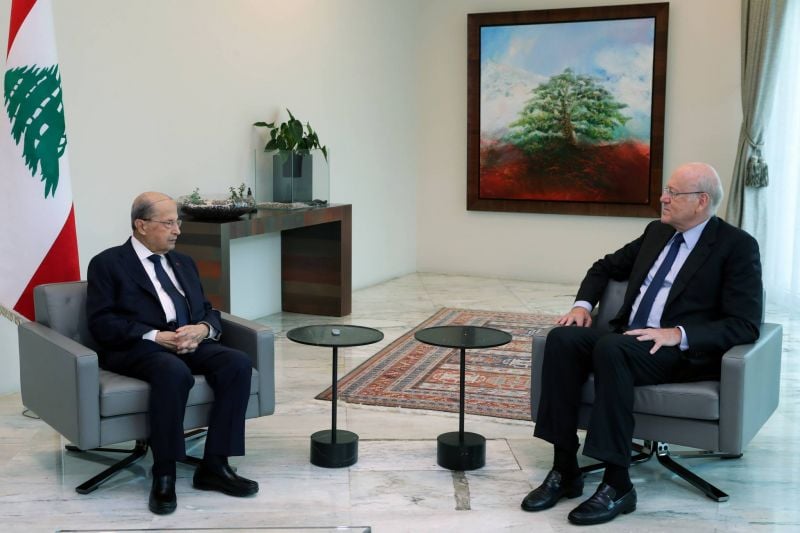 President Michel Aoun met with Najib Mikati on Monday before the latter was designated premier by MPs. (Credit: Dalati & Nohra)

BEIRUT — The task of addressing Lebanon’s spiraling crises will fall to billionaire former Premier Najib Mikati — if he can form a government.

The Tripoli MP clinched the support of 72 parliamentarians, receiving votes from the Future Movement, the Amal Movement, Hezbollah, the Progressive Socialist Party, the Marada-led bloc, the Syrian Social Nationalist Party, Mikati’s own Azm Movement, four independent MPs and half of the four-member Consultative Gathering bloc.

The country’s two largest Christian blocs, however, withheld support, casting blank votes. They were joined by three independents and the Consultative Gathering’s Walid Sukkarieh and Faisal Karami — one of Mikati’s rivals both in Tripoli and as a potential candidate for premier. Fouad Makhzoumi cast a lone vote for jurist Nawaf Salam. Three others cast no votes, while 10 seats remain empty due to resignations and deaths; the constitutional mandate to hold by-elections for the vacant seats was ignored.

Despite winning a majority of votes, Mikati is not assured of returning to the Grand Serail. Both Saad Hariri, a three-time former premier, and Mustapha Adib, a diplomat, have tried and failed to form cabinets since the government of caretaker Prime Minister Hassan Diab collapsed in the wake of the Aug. 4 Beirut port explosion.

Mikati will have to contend with President Michel Aoun, who has taken a vague but seemingly intractable position on government formation, leading to accusations that he is seeking veto power in a new government. The president denies the charges.

Aoun expressed his readiness to work with Mikati in an interview published in local daily Al-Joumhouria on Saturday, but it is unclear how well this will translate to a government-formation process that has been fraught with delays and disagreements over the past year, despite increasingly sharp statements from politicians regarding the urgency of empowering a new slate of ministers.

If a government is not formed or fails to receive a vote of confidence by Aug. 8, the current interregnum will become the longest in Lebanon’s history as an independent country.

The successive failures to form a government have come as the country faces its worst crisis since the 1975–90 Civil War. Losses — especially those in dollars — that accumulated in the financial system since the end of the war led the government to default on its debt last year and commercial banks to severely restrict withdrawals, locking many people out of their life savings.

Hemorrhaging dollars, the central bank has been unable to back up the lira’s longtime peg to the dollar, sending the national currency on a downward spiral. Since the beginning of the crisis two years ago, the lira has lost more than 90 percent of its exchange value against the dollar. Politicians and policymakers have made no serious attempts to allocate losses or reform the system.

The financial crisis has ballooned into a full-blown economic and social crisis as a majority of Lebanese people are estimated to now live in poverty, with spiraling inflation pushing many goods out of reach for most. A subsidies scheme has faltered as the central bank’s foreign reserves dwindle, also causing shortages of basic goods such as fuel and medicine. The lack of fuel, meanwhile, has hamstrung logistics in the country and severely restricted power generation, plunging much of the country into darkness.

Billions of dollars in international aid is contingent on reforms that only a fully empowered government can enact.

Following his designation, Mikati said he aimed to form a government according to the so-called French initiative, French President Emmanuel Macron’s road map for reforms unveiled in the aftermath of the port explosion. The first step in the plan is the formation of a government, which was supposed to be completed by Sept. 15, 2020.

Addressing media gathered at the Presidential Palace, Mikati suggested that he had foreign backing, but did not provide specifics: “If I did not have external guarantees, and if I did not know that someone wanted to put out the fire, I would not have taken this step.”

The new premier-designate appeared sober at the scale of the challenge, telling reporters, “I do not have a magic wand and I cannot do wonders.”

Amid the crisis, some Lebanese were skeptical of Mikati’s chances of enacting just reforms, citing his vast wealth, years in government, political positioning, failure to yet propose any plan to tackle the crisis, and allegations of corruption, which the premier-designate denies.

On Monday morning, when the outcome of the consultations were in little doubt, Henri Chaoul, a former advisor to the finance minister who resigned last June, tweeted that Mikati had “shared no program, no vision, no plan.”

The popular Beirut City Guide simply tweeted, “*Pretends to be shocked*” alongside a headline announcing Mikati’s designation and photos of the tycoon and his yacht.

Imad Salamey, an associate professor of political science and international affairs at the Lebanese American University who studies Lebanese political history, told L’Orient Today that Mikati has better prospects at forming a government than his off-and-on rival Hariri, who resigned the week before last after nearly nine months of attempting to form a government.

However, Salamey noted that Mikati and Aoun have had a contentious relationship in the past and that the premier-designate might not want to look as if he were giving in too easily to Aoun’s wishes now with regards to cabinet formation. And Salamey said he does not believe that Mikati’s government will get the international support it needs.

“I don’t think the Mikati government will do any better than what Diab did,” he said. “It’s going to be a very weak government, especially that Mikati has no real backing behind him on the Sunni level.”

But the premier-designate starts out with good news on another front. As Mikati’s name gained traction over the weekend and into Monday, the lira strengthened significantly, with a dollar oscillating between LL16,000 and LL18,000 throughout Monday afternoon, down from LL24,000 in the aftermath of Hariri’s resignation the week before last.

BEIRUT — The task of addressing Lebanon’s spiraling crises will fall to billionaire former Premier Najib Mikati — if he can form a government.The Tripoli MP clinched the support of 72 parliamentarians, receiving votes from the Future Movement, the Amal Movement, Hezbollah, the Progressive Socialist Party, the Marada-led bloc, the Syrian Social Nationalist Party, Mikati’s own Azm...

Deadly Tayyouneh shooting, US support to army, 2019 uprising anniversary: Everything you need to know today