Fifteen years later, a look back at the war that transformed Hezbollah

The July 2006 war gave a new dimension to Hezbollah and its secretary-general, Hassan Nasrallah. 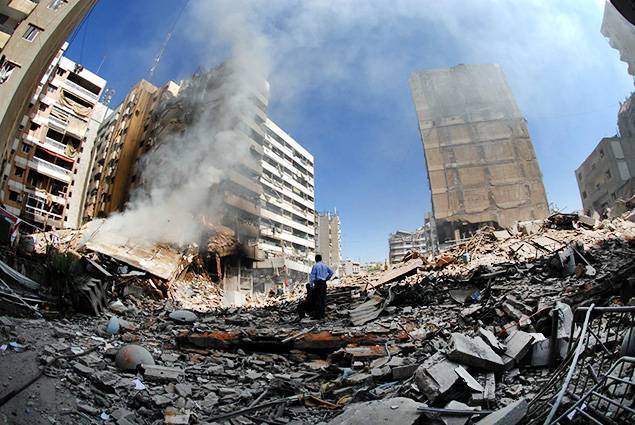 “If only I had known …” Nasrallah said on Aug. 26, 2006, admitting that if he knew that the kidnapping of two Israeli soldiers on July 12 the same year would lead to a 33-day full-blown conflict with Israel, he would have reconsidered his decision.

It seems likely that 15 years later, and with the benefit of hindsight, Hezbollah’s powerful secretary-general would certainly have calculated differently.

While the party immediately claimed victory, with Israel not having achieved any of its war goals, Hezbollah did not realize at the time how much this round of violence would transform it. The 2006 war gave Hezbollah free rein to build and strengthen its domination over the south and across Lebanon, and gave it wings in the region.

But back to 2006. A few months before the war broke out, Nasrallah said Lebanon would have a calm summer.

Was the party leader trying to take his enemy by surprise or did he indeed have no idea yet how things would turn out?

Even 15 years later, some answers remain unclear as to whether or not the two sides envisaged going into battle that summer.

Some observers accuse Israel of having sought a military confrontation with Hezbollah with one goal in mind: destroying the Shiite party from the outset of hostilities.

Meanwhile, others believe that it was Hezbollah and its Iranian patron that wanted this war to fulfil their internal and regional calculations.

But neither side expected things to escalate the way they did.

On the morning of July 12, Hezbollah announced the capture of two Israeli soldiers, while three others were killed in the operation. Israel retaliated immediately, but the tanks that were sent to release the two captives met with strong resistance.

The Israeli air force launched raids. Hezbollah responded with a barrage of Katyusha missiles on the Galilee. Very quickly, the situation escalated. For Israel, it was a matter of national security.

But the Jewish state set itself a big goal — the destruction of Hezbollah — with limited means: air strikes that caused hundreds of thousands of Lebanese to flee their homes, and destroyed entire neighborhoods, but had a limited impact on the Shiite party that was largely settled underground.

‘The party was ready for the confrontation’

Since the Israeli withdrawal from south Lebanon in May 2000, Imad Mughniyeh, Hezbollah’s military chief — who was assassinated in Damascus in 2008 — had been preparing for a new confrontation with Israel.

He made the decision to reinforce all military units, dig tunnels and underground security zones for the party's main leaders, and to build a missile system to launch rockets automatically from underground.

During the war, Israel was surprised by its adversary’s military tactics.

“The party was ready for the confrontation, the enemy was not,” a Hezbollah official confirms.

The conflict took place in a changing local and regional context. In Lebanon, the Cedar Revolution — a series of demonstrations in the country triggered by the February 2005 assassination of former Prime Minister Rafik Hariri — and the departure of Syrian troops from Lebanon were seen as a threat to Hezbollah. Talk abounded about the establishment of an international tribunal to investigate Hariri’s death.

Two days before the war, on July 10, Larijani headed to Damascus for a meeting with Nasrallah and leaders of the Syrian government. He told them that the negotiations had faltered, and that action was now required.

“Iran started the 2006 war to alleviate the pressure the Bush administration was putting it under,” a Lebanese politician opposed to Hezbollah says.

In the same context, the detractors of the “axis of resistance” accused it at the time of having waged a battle against Israel on its northern front while Israel had launched a military operation in the Gaza Strip one month earlier, in June.

Was the July 2006 war Iran’s decision only? Hezbollah recognizes the fact that all decisions on war and peace are the prerogative of Iran’s supreme leader, according to the ideology of the velayat-e faqih, or “guardianship of the Islamic jurist.”

On the ground, however, things seem slightly different. “This kind of decision is taken by strategic circles inside Iran and by Hezbollah’s Jihadist Council, headed by Nasrallah,” says the Hezbollah official.

Another source close to the party adds, “Hassan Nasrallah, Imad Mughniyeh and Mustafa Badreddine (a Hezbollah military leader in Syria and one of five party members accused by the Special Tribunal for Lebanon of involvement in Hariri’s assassination) had a leading role in the war decisions. Mughniyeh maintained close relations with Qassim Soleimani ,” the commander of the Quds Force in Iran’s Islamic Revolutionary Guard Corps who was killed in an US drone strike in Iraq in January 2020.

Within Hezbollah’s circles, it is claimed that the war was the result of an American desire to get rid of the Shiite party and that the latter was surprised at the Israeli reaction to the capture of the two soldiers — although it was not the first time the party employed such a strategy.

“The possibilities of an Israeli response had been accounted for, but not that of a global war,” the aforementioned Hezbollah official says.

Another source within the party says that Hezbollah was considering another option at the time: carry out an operation against Israelis in the village of Ghajar on the Hasbani River on the border between Lebanon and the Israeli-occupied part of the Golan Heights, in a bid to win control of the town.

At the time, Mughniyeh appeared as strong as Hezbollah’s secretary-general. But the war gave a new dimension to Nasrallah. His oratory skills and eloquent speeches would make him a regional hero.

In a July 15 speech, Nasrallah announced the destruction of an Israeli vessel and broadcast a video, showing a strike targeting the ship, live on television.

It was an impressive and spectacular scene, especially since no one imagined that Hezbollah possessed surface-to-sea missiles capable of hitting targets with precision.

Throughout the war, Israel attempted to assassinate Nasrallah but to no avail. While Beirut’s southern suburbs, Hezbollah’s stronghold, were the target of Israel’s heavy bombardments, it was Soleimani and Mughniyeh who got the party leader out his headquarters to a safe location.

In the last days of the conflict, Israel bombed 11 buildings in Beirut’s southern suburbs, especially in the Burj al-Barajneh area, convinced that Nasrallah was in one of them.

“Wissam al-Hassan (then intelligence chief of the Internal Security Forces) warned Nasrallah that Israel would target this site, prompting him to leave the premises. This tip saved his life,” an ISF source says.

The deadly fighting came to an end 33 days later with the adoption of United Nations Security Council resolution 1701. Both parties welcomed the UN decision, which resulted in restoring calm on the battlefront through the reinforcement of United Nations Interim Force in Lebanon troops and the deployment of the Lebanese Army.

Hezbollah emerged victorious from the war. But Lebanon was the real loser, having incurred more than 1,200 fatal casualties, mostly civilians, and heavy destruction.

Israel, for its part, suffered a defeat, in the sense that the Israeli political and military establishments seemed completely overwhelmed by their adversary’s display of resistance.

The war transformed Hezbollah, making it a major player at the regional level — a role that would take yet another dimension with the outbreak of the civil war in Syria in 2011.

Above all, the 2006 conflict accelerated the transition from Syria to Hezbollah as the dominant power in Lebanon. From that moment, the party was no longer reluctant to turn its weapons inward, which would contribute to disrupting the entire Lebanese political game.

Things culminated two years after the war, in May 2008, when Hezbollah militiamen and their allies occupied Beirut by force.

And while Lebanon crumbles, Hezbollah seems to have given up its 2006 logic.

In his last speech, Nasrallah admitted that the country is suffering from a systemic crisis. This was the first time in years that he had expressed himself in words indicating that a change was inevitable at the domestic level.

As rumors of a major regional bargain abound, Hezbollah might be forced to redefine its relations with the Lebanese state.

In Iraq, the paramilitary militias have been partly integrated with state forces. Today, a source close to the party says, Hezbollah is considering all such options.

“If only I had known …” Nasrallah said on Aug. 26, 2006, admitting that if he knew that the kidnapping of two Israeli soldiers on July 12 the same year would lead to a 33-day full-blown conflict with Israel, he would have reconsidered his decision.It seems likely that 15 years later, and with the benefit of hindsight, Hezbollah’s powerful secretary-general would certainly have...

The Interior Ministry, the first obstacle in the cabinet’s formation … again

Wildfires in the north, Mikati to Baabda, immunity lifted in port case: Everything you need to know today