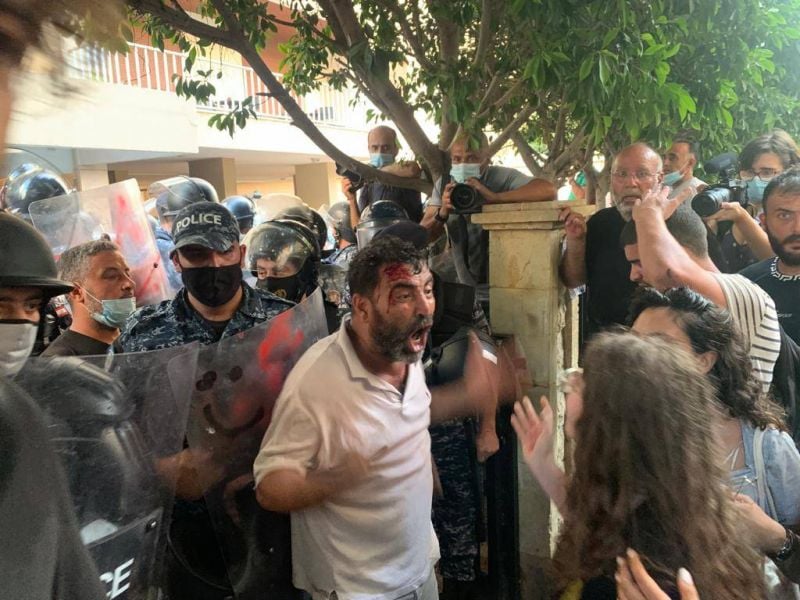 BEIRUT — Protesters demanding justice for those killed in the Beirut port explosion were beaten and tear gassed by security forces on Tuesday evening outside the home of caretaker Interior Minister Mohamed Fehmi in Beirut.

Families of those who died in the Aug. 4 blast had gathered outside Fehmi’s house at around 6 p.m. to call for him to allow Judge Tarek Bitar to prosecute General Security head Abbas Ibrahim in his investigation into the explosion. By 9 p.m., the crowd had grown to around 500 people.

Protesters carried white coffins bearing photos of the victims and placed them in the courtyard outside Fehmi’s Qoreitem home. Several demonstrators reached the entrance of Fehmi’s building and smashed a glass facade before security forces pushed them back.

“I came here today because it is clear that this regime won’t follow the course of justice,” 20-year-old protester Charbel Chaaya told L’Orient Today. “The only option is to pressure them by force.”

The Lebanese Red Cross said it had dispatched four teams to Fehmi’s house to treat the wounded and take those with more severe injuries to hospitals, but had not released a total number of wounded at the time of publication.

In a statement, the Internal Security Forces claimed that 20 of its members were injured by falling glass or attacks by protesters.

Last year’s explosion of huge quantities of improperly stored ammonium nitrate killed more than 210 people, injured thousands of others and destroyed large parts of the capital.

In a televised interview following Bitar’s request to question Ibrahim, alongside several other high-ranking officials including three sitting MPs, Fehmi had vowed that he would grant permission.

“Since [Bitar’s] request to prosecute Maj. Gen. Abbas Ibrahim respected all legal principles, I can only give permission out of respect for the law,” he told LBCI.

He later reneged on his promise and rejected Bitar’s request, a decision that the judge then appealed.

“Mohamed Fehmi is a liar. He said one thing on camera, then behind the scenes he said the opposite,” the brother of one of the victims shouted during Tuesday’s protest.

The protesters’ aim was to force the caretaker minister to “immediately give permission for the suspects to be pursued,” a demonstrator told our sister publication L’Orient-Le Jour. “Otherwise, he is complicit.”

At least some of the tear gas fired at protesters appeared to be manufactured by French companies Alsetex and Nobel Sport, products used by security forces to quell demonstrations since the Oct. 17, 2019, uprising.

France, among other foreign nations, has called for justice to be served in the Beirut port investigation. On Monday, French Foreign Minister Jean-Yves Le Drian announced that the EU was preparing to launch sanctions against Lebanese officials as part of a wider push to pressure leaders to deal with the multiple crises facing the country.

The minister previously said that France was considering sanctions on those seen as obstructing government formation and involved in corruption.

It was unclear whether France had donated the tear gas used against protesters; the French Embassy was not immediately available for comment.

Over the weekend, several victims’ family members held a sit-in outside Fehmi’s house, eventually leading to a meeting with the caretaker minister, in which they urged him to reconsider his decision to reject Bitar’s request to prosecute Ibrahim. A representative of the families said after the meeting that Fehmi had asked them to return on Monday, but they refused as they were “not convinced” by his justification.

On July 2, Bitar sought permission to lift immunity from state officials that would allow him to interrogate and prosecute them on suspicion of “probable intent to murder” and criminal negligence.

Among them are three sitting MPs and former ministers: Nohad Machnouk, Ghazi Zeaiter and Ali Hassan Khalil. On Friday, Parliament’s secretariat and Administration and Justice Committee held an initial meeting to discuss removing immunity, as Article 40 of the constitution stipulates that the legislature’s officials cannot be arrested or prosecuted for any criminal offense without Parliament’s permission, unless they are caught in the act.

The lawmakers set themselves a 15-day deadline to give their final answer to Bitar’s request. Bitar’s predecessor, Fadi Sawwan, was removed from the case after two MPs, Khalil and Zeaiter, refused to appear for questioning and claimed Sawwan’s actions were politically motivated.

Several dozen protesters had gathered outside the barricaded entrance of Nijmeh Square, where Parliament is located, earlier on Tuesday evening to call for immunity to be lifted from the lawmakers. Many later relocated to Fehmi’s house to offer support to the victims’ families.

“Where else should we be after our capital got destroyed?” 26-year-old protester Yasmina Assi told L’Orient Today. “Are we supposed to just stay at home? We came to hold people accountable, and not just Fehmi — the turn of every person in power will come.”

BEIRUT — Protesters demanding justice for those killed in the Beirut port explosion were beaten and tear gassed by security forces on Tuesday evening outside the home of caretaker Interior Minister Mohamed Fehmi in Beirut.L’Orient Today witnessed several injured protesters being carried from the scene by paramedics, and local media reported that multiple people suffered respiratory distress...