In the battle over government formation, Bassil looks to Nasrallah 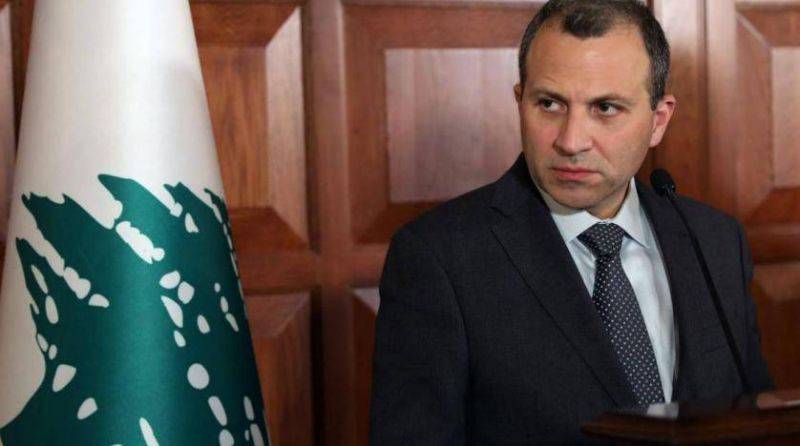 Free Patriotic Movement leader Gebran Bassil on Sunday urged Hezbollah Secretary-General Hassan Nasrallah to adjudicate the dispute over the new cabinet formation between the president’s camp, on the one hand, and Prime Minister-designate Saad Hariri and Parliament Speaker Nabih Berri on the other hand.

The Shiite party has refrained from commenting on the appeal, at a time when relations with President Michel Aoun and his movement are rocky and Hezbollah voiced support for Mr. Berri’s efforts, which it deemed valid.

In a televised speech, Mr. Bassil, who is at loggerheads with Berri more than ever, said, “I am resorting today to a friend of mine, Hassan Nasrallah.”

Berri, who is deeply involved in the government formation talks, has expressed support for Hariri over Aoun and Bassil.

“I want Hassan Nasrallah to act as arbiter, because I do trust him. I entrust him with the question of Christians’ rights, a cause the Aounists hold dear. I am sure that you are committed to what is right,” he added.

Addressing the Shiite leader, the FMP leader said, “I, Gebran Bassil, without placing any burden on you, I will accept whatever you accept for yourself.”

This is the first time Bassil addressed Hezbollah directly about the government dossier, as relations are strained between the Shiite party and the FPM on several issues, including the fight against corruption.

“We would not like to discuss further,” the official said.

“The battle [for Christians’ rights] is existential,” said Bassil, accusing critics of Baabda of wanting to undermine the equation of “the strong president.”

Addressing Berri and Hariri, the FPM leader said, “You will not be able to acquire through pressure what you could not lay hold of since 2005,” the year Aoun returned to Beirut after spending 15 years in exile in Paris.

As part of “the battle” for Christians’ rights, Bassil denounced his chief rival in the Christian arena, LF leader Samir Geagea, for not joining his side. “Do you think that you could conceal your crime by remaining tight-lipped?”

The LF was quick to reply. A few hours after Bassil’s press conference, the LF asked in a press release “whether it is acceptable for the leader of the largest Christian parliamentary bloc and the president’s party to have Nasrallah arbitrate the dispute over the cabinet formation.” The debate between the two parties dragged on through the afternoon.

Bassil delivered his discourse as tension prevails over a political landscape locked in a standoff between Baabda, on the one hand, and Ain al-Tineh and Beit al-Wasat on the other hand, against the backdrop of government negotiations that are dragging on indefinitely.

Commenting on the “war of statements” that broke out at the outset of the week between the two camps over the head of state’s prerogatives in the cabinet formation, the MP for Batroun lashed out at Berri’s initiative to facilitate cabinet formation, which consists of forming a 24-minister cabinet, with no party retaining the “blocking third” veto power.

Mediation rather than initiative

“Hassan Nasrallah turned to a friend, Speaker Nabih Berri, to help make a breakthrough in the crisis. But for me, there is no such thing as a Berri initiative. There is only an attempt at mediation,” he said, adding that he deplores the fact that he was not made aware of the “elements” of his initiative.

“We appreciate these efforts when they are fair and balanced. But they become unacceptable when the mediator takes sides, as has been the case in recent days,” Bassil said.

The FPM leader went on to say, “What reaction did you expect from us when you formulate lies about maintaining an equal sharing [of power] between Christians and Muslims, when you are in fact dividing shares in three [among Christians, Sunnis and Shiites] based on a formula of eight [ministers] for each?”

“Real equal [power] sharing is when Christians name 12 ministers and Muslims 12, and not when Christians get to choose the names of eight ministers only, while Muslims name 16. We refuse this three-way division,” he insisted, reiterating the Aounist parliamentary bloc’s position from a few weeks ago.

While Berri refrained from commenting on Bassil’s remarks, a source close to the speaker said the Amal Movement is waiting for Hezbollah’s reaction.

“The initiative is still on, and we continue to support Mr. Hariri,” the source told L’Orient-Le Jour, welcoming the fact that “Mr. Bassil is in favor of a cabinet of 24 ministers.”

Commenting on Bassil’s remarks regarding Christians’ rights, the source said, “It is not about rights, but about Michel Aoun’s desire to appoint all Christian ministers, while he is not the only one to represent this portion of the population.”

Bassil reiterated that his camp has made all the necessary concessions to facilitate the cabinet formation process and that the presidential camp has never made any demands, does not wish to secure veto power in the government and does not want to participate in a cabinet headed by Hariri.

He criticized once again the premier-designate, accusing him of procrastinating and not wanting to engage in dialogue with other political parties’ leaders, including Bassil himself.

However, the FPM head made sure to mention that his camp would not work to thwart “a government led by Saad Hariri because this is the only available option now,” in a bid to respond to the accusations that the president and his son-in-law were seeking to brush Hariri aside.

“We want a government that will implement reforms,” Bassil added, criticizing Parliament for not having passed a draft bill to formalize capital controls or a law to recover funds transferred abroad — both proposals presented by the Aounist camp.

Bassil stressed, “There is no political will to implement reforms,” which is the main prerequisite for the international community to unblock financial aid to Lebanon.

This article was originally published in French in L’Orient-Le Jour. Translation by Joelle El Khoury and Sahar Ghoussoub.

Free Patriotic Movement leader Gebran Bassil on Sunday urged Hezbollah Secretary-General Hassan Nasrallah to adjudicate the dispute over the new cabinet formation between the president’s camp, on the one hand, and Prime Minister-designate Saad Hariri and Parliament Speaker Nabih Berri on the other hand.The Shiite party has refrained from commenting on the appeal, at a time when relations with...

One day after vote, Supervisory Commission for Elections has still not been funded

The opposition forces make a breakthrough in Chouf-Aley