The two leaders need each other to exist politically, whether in partnership or in opposition 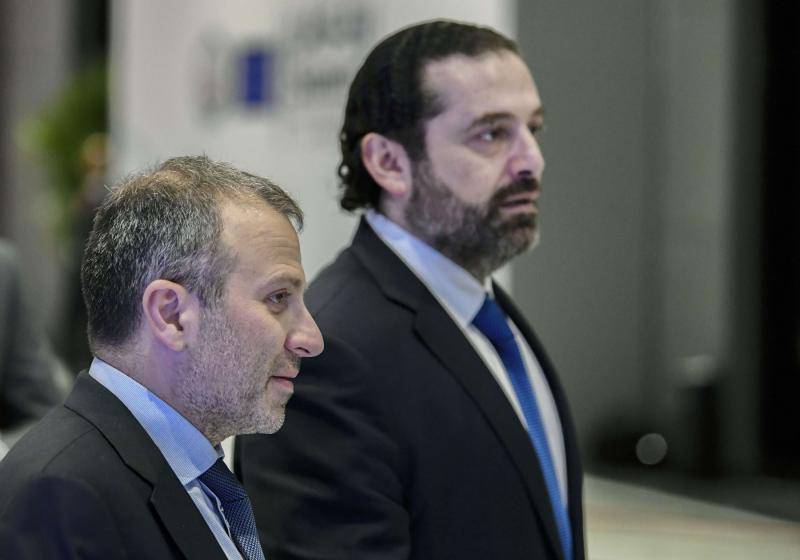 Gazing at the camera with a smirk on his face, then-Foreign Minister Gebran Bassil appeared proud as a peacock as he straddled the orange motorbike of then-Prime Minister Saad Hariri.

The 2015 photo that was taken at Hariri’s house in Jeddah and made the rounds on social media, is terribly ironic today. The time for jokes and political rapprochement is over.

Ten months have passed and Lebanon is still without a government because these two men can no longer stand to be together in the same room. Ironically, for years the duo represented the engine of Lebanese power, shuffling old political alliances contrary to all expectations.

They were born the same year. They made their political debut during the same period. They are both party leaders and have sought to embody the “new” generation in power.

By sealing their agreement against all the usual Lebanese equations, they thought they would take center stage at the expense of the old dogs, Nabih Berri, Walid Joumblatt and even Michel Aoun.

This shared feeling of having not only an interest but also a common destiny was at the heart of the relationship between Hariri and Bassil.

But they did not share a political project or a common vision. Only the ambition to be able, together, to lead and transform the country, breaking free from the old rules.

As early as 2015, it was Nader Hariri, then the head of Hariri’s political team, who took up the role of the matchmaker. The objective? Prepare for Hariri’s return as prime minister through an alliance with the man seen as “the strongest” in the Christian arena.

“He was convinced that this was the only way to allow Hariri to make his comeback,” said a source close to Nader Hariri, adding that the latter “believed that this would relieve Hariri of his old alliances with Samir Geagea, Walid Joumblatt and Nabih Berri, which had begun to weigh him down.”

Nader Hariri laid the groundwork for a lasting agreement, the cornerstone of which was the 2016 presidential compromise — a deal that was able to withstand several crises, including the bizarre sequence of events in November 2017, when then-Prime Minister Hariri was held in Riyadh and apparently coerced into resigning from his post.

The two leaders tried to present themselves as the Bechara El Khoury and Riad al-Solh — independent Lebanon’s first president and prime minister — of modern times. When the “strongest” Sunni leader and the “strongest” Christian leader get along, everyone else plays second fiddle. This time, only Hezbollah benefited from the alliance, taking advantage of both Sunni and a Christian political cover.

But the bromance between the two could hardly last. From the very beginning, the relationship was far too unbalanced.

Bassil was too strong for Hariri. Too ambitious, too dynamic, too authoritarian. Within Hezbollah, he is nicknamed as “Sultan Bassil,” in reference to “Sultan Salim,” Bechara El Khoury’s brother, who in fact controlled the cogs of the state’s machine.

“I am going to make Christians forget about Camille Chamoun and Bachir Gemayel” — a former president and assassinated president-elect — the Free Patriotic Movement head told anyone who would listen in his entourage, according to a politician who once witnessed the scene.

Bassil wants to make history, Hariri wants to play a role in it. The latter’s desire to retake the Serail, the seat of government in Beirut, at any cost, caused his former allies to grow disenchanted with him.

“Never expect me to disagree with Michel Aoun, or to go against his instructions,” Hariri told Progressive Social Party leader Walid Joumbatt back in 2018 when the latter was anxious to defend his vision on preparing for the electoral law.

For years, Bassil took advantage of the presidential compromise to have “his share” in the state institutions — something he considered to be rightfully his.

In his mind, for decades, the deep state has been controlled by the ruling troika of Hariri, Berri and Joumblatt.

For him, it was time to turn the tide. Everything was set in the initial agreement: the sharing of the pie in all sectors, from electricity to telecommunications, including security, military and judicial appointments, as well as the electoral law.

Things have gotten to a point where no Sunni civil servant could be appointed without Bassil’s approval, according to sources close to Hariri, who were upset by these arrangements.

The president’s son-in-law placed his own men in all strategic corners of the state. For instance, he appointed Rami Adwan, the head of his political bureau, as ambassador to Paris, against the usual diplomatic customs.

‘In the end, you will come back to me’

The alliance between the two men crumbled when the protests broke out in the streets. In October 2019, Hariri tried to ride the wave of the uprising, which brought the agreement to an end.

Ever since, Lebanon has been a prisoner of their dispute. They need each other to exist politically, in partnership as well as in opposition.

No government is possible without an agreement between them. At the same time, their mutual animosity toward each other is one of the few things that keeps them politically alive today — and is what they are banking on in the run-up to next year’s parliamentary elections.

“You went too far in your attack, but in the end, you will come back to me. But this time, the road will be longer,” Bassil told Hariri on Feb. 14, 2020, according to a close associate of the FPM leader.

“Hariri will have no other choice in the end but to reach out to Bassil,” the source added. Within the Aounist camp, the Sunni leader is currently seen as being in a weak position given the fact that new political figures have emerged on the Sunni arena and because of his strained relations with Saudi Arabia.

“He can no longer count on the French, nor on Walid Joumblatt and Samir Geagea, so he will eventually return to us,” an FPM official said.

On the other side, this option is completely out of the question. “Bassil does not know how to stop. He always wants more. He wants to control everything,” an official from the Future Movement said.

As both sides blame each other for the collapse, sources close to the two parties admit that the dispute is neither political nor ideological, and not even over how to manage the state, but rather a personal matter.

Gazing at the camera with a smirk on his face, then-Foreign Minister Gebran Bassil appeared proud as a peacock as he straddled the orange motorbike of then-Prime Minister Saad Hariri.The 2015 photo that was taken at Hariri’s house in Jeddah and made the rounds on social media, is terribly ironic today. The time for jokes and political rapprochement is over.Ten months have passed and Lebanon is...

The Interior Ministry, the first obstacle in the cabinet’s formation … again