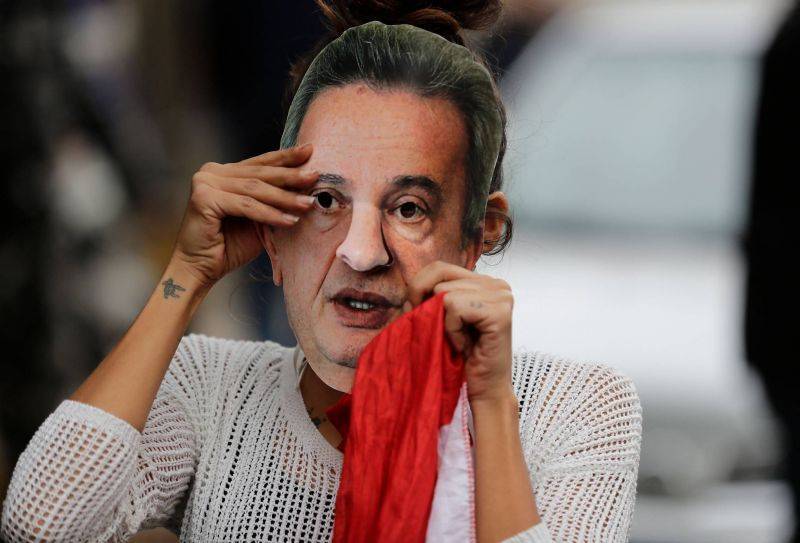 A protester holds a mask bearing the effigy of BDL Gov. Riad Salameh during a sit-in in front of the headquarters of the central bank in Beirut in November 2019. (Credit: Joseph Eid/AFP)

William Bourdon and Amelie Lefebvre, lawyers for anti-financial crime group Sherpa, and Antoine Maisonneuve, a lawyer for the Swiss foundation Accountability Now, confirmed to L’Orient Le-Jour the news that the French national financial prosecutor’s office has actually opened a probe. The lawyers lodged two separate complaints with the French financial prosecutor's office pertaining to suspicion of money laundering and fraud in Lebanon and abroad on behalf of their respective organizations.

The news was revealed Sunday by Agence France-Presse, before being circulated by other media outlets. The latter revealed key points in the legal action that was opened against Salameh abroad. Salameh also faces the Lebanese judicial authorities in other legal cases.

The French and Swiss pre-trial investigations are confidential, except for the legal action’s preliminary details, which were made public. Sources familiar with the case confirmed to L’Orient-Le Jour much of the information.

The French financial prosecutor’s office at the Judicial Court of Paris initiated the probe. Following the Cahuzac affair — named after France’s former Budget Minister Jerome Cahuzac who was at the heart of a financial and political scandal in France — the office has been leading complex criminal investigations into economic and financial crimes since 2014, according to its statute. The probe into Salameh was prompted by two separate complaints filed in April.

One of the complaints was lodged by Accountability Now on April 16. It seeks to inquire into the origins of real estate assets that Salameh acquired after he took up his post as central bank governor in 1993 — assets worth $35 million in France and $150 million across Europe, according to Accountability Now.

Sherpa — a French association founded in 2001 with the goal of “combatting new forms of impunity linked to the globalization of economic and financial exchanges” — lodged a separate complaint two weeks later. Sherpa was joined by the Collective Association of Victims of Fraudulent and Criminal Practices in Lebanon, which brings together depositors whose savings have been trapped by banking restrictions during Lebanon’s ongoing financial crisis.

The two associations brought complaints against unnamed individuals allegedly involved in cases including money laundering, fraud and criminal association. The document stating these complaints, which comprises more than 80 pages, was seen by L’Orient-Le Jour. It questions the origin of the funds that mainly led Salameh; his younger brother Raja Salameh; his son, Nady Salameh; nephew Marwan Issa al-Khoury; and his young assistant Marianne Howayek to possess an important real estate portfolio in Europe.

According to Sherpa’s complaint, Salameh’s fortune amounts to $2 billion. The organization bases this claim particularly on reports about Salameh’s foreign holdings by Lebanese website Daraj.com and the Organized Crime and Corruption Reporting Project.

Salameh has contested these figures, arguing that his holdings derive from inheritances and his career in finance. He has told the media that his “personal assets amounted to $23 million” when he became governor 28 years ago, and that since then, his accumulated wealth stems from investments that are not in breach of the duties of his position. This interpretation, however, remains unpopular in Lebanon.

However, the French probe will not be limited to Salameh and his relatives. Although “the Salameh clan is pivotal in the case, the probe will investigate wide-ranging facts including money laundering-related facts in France and certainly in other European countries, starting from offenses committed in Lebanon, such as fraud. The findings will create a domino effect to necessarily identify other clans and networks,” they said.

People from different backgrounds holding public and private posts may be suspected, and charges may be either added or withdrawn at the discretion of the investigation. A formalization of judicial cooperation at the European level is “inevitable.”

The French investigation could also request mutual legal assistance from Lebanon, similar to the request the Swiss prosecution previously sent. However, such a request is not necessary, “since the proceeds of the alleged crime are now in the French territory,” Wakim said.

The people involved may have their assets frozen. “It is up to the financial prosecutor to take such a decision. But in general, asset freezing goes hand in hand with the probe opening, especially in aggravated money laundering, as is presently the case,” Wakim explained.

Bourdon and Lefebvre echoed this: “The judicial system in France entitles the investigators and examining magistrates to freeze the assets in case there is presumption of funds of illicit origin.”

In light of the Swiss probe, some of Salameh’s bank accounts in Switzerland have been frozen as a precautionary measure. “Nearly $50 million has been officially frozen, but in reality, the sum could be higher since the prosecutor has not made public all relevant accounts,” Wakim said.

Salameh is also under the microscope of multiple British bodies focusing on financial crimes — the Serious Fraud Office, the National Crime Agency and the Financial Conduct Authority — which Accountability Now and Guernica 37, a British NGO, resorted to. Nevertheless, the UK has not officially opened any probe in this regard.

Commenting on these various legal actions, Salameh has insisted that they constitute politically motivated judicial harassment, as indicated by French lawyer Pierre-Olivier Sur in a written reply on Sunday that dismisses the claims as a “communications operation” against Salameh.

He referred to complaints “which have already been given prominent attention in the media by Sherpa or the Collective Association of Victims of Fraudulent and Criminal Practices, while nothing is known of their direct and indirect interests in Lebanon.” He also signaled a form of sensationalism deployed by the plaintiffs through the terms used to describe their actions, including “a mega-inquiry” or “ecumenical probe” targeting a “despised” person.

He described the whole affair as a “communications operation,” “political operation” and “smear campaign.” Sur said that “Sherpa’s complaint is mainly founded on an inquiry by an English firm which came to the conclusion that “there was no smoking gun” in reference to the lack of conclusive evidence.

He underlined that the complaint filed by the Collective Association of Victims of Fraudulent and Criminal Practices “was based on a report by a French investigation firm against which a preliminary investigation had already been underway for nearly six months on charges of seeking a ruling under false pretenses following a complaint […] that Salameh lodged in Lyon.”

The next stages will be determined based on probe-related developments. The prosecutor’s office may dismiss the case, assign an examining magistrate to lead a judicial investigation or take legal actions if there is sufficient evidence. In any event, determining the essence of the different cases will take some time. “It is the early stage of the process, and it is hard to tell how long the prosecution will need to carry out its investigation,” Maisonneuve said.

Wakim meanwhile said, “The various probes will take time given that there are some astronomical sums and given the complex money-laundering and corruption-incriminating systems. Yet, the opening of probes in several countries could speed up things, and will allow the relevant prosecutors to request mutual legal assistance, which has been hard to do so far.”

Walid Sinno, a Lebanese activist and member of Accountability Now, said that he regrets the fact that Lebanon is “a land of impunity where, despite being targeted by probes for aggravated crimes, leaders remain in office while they would have been forced to resign if they were in a different country.”

Hariri’s future, lira plunge, conference to fund army: Everything you need to know to start your Monday

Loyal to their ‘zaim’ until their last breath